TORONTO (Reuters) – The man accused of fatally shooting two people and wounding 13 others on a bustling Toronto street struggled with severe mental illness, his family said on Monday as police sought a motive in the rampage.

Less than a day after a 10-year-old girl and 18-year-old woman were killed, the suspect was identified by the independent Special Investigations Unit (SIU) as Faisal Hussain, a 29-year-old Toronto resident. He was found dead shortly after the shooting, authorities said.

“We do not know why this happened,” Toronto Police Chief Mark Saunders told reporters on Monday, adding he would not speculate about the gunman’s motive. “It’s way too early to rule out anything.”

The suspect, armed with a handgun, opened fire at 10 p.m. on Sunday on a stretch of Danforth Avenue filled with restaurants and family-friendly attractions in an area of east Toronto known as the Greektown neighborhood, the SIU said.

It was the second deadly act of mass violence this year in Canada’s most populous city. In April, a driver deliberately plowed his white Ryder rental van into a lunch-hour crowd, killing 10 people and injuring 15 along a roughly mile-long (1.6-km) stretch of sidewalk thronged with pedestrians.

“We are utterly devastated by the incomprehensible news that our son was responsible for the senseless violence and loss of life,” Hussain’s family wrote in a statement, adding he suffered from severe mental illness as well as from “psychosis and depression his entire life.”

“While we did our best to seek help for him throughout his life of struggle and pain, we could never imagine that this would be his devastating and destructive end,” the statement said.

Police did not identify the two people killed by the gunman. Local politician Nathaniel Erskine-Smith confirmed the 18-year-old victim was Reese Fallon, a recent high school graduate who planned to study nursing.

“The family is devastated,” Erskine-Smith said in a statement, adding that family members had asked for privacy while they mourn a young woman who was “smart, passionate and full of energy.”

The gunman exchanged fire with police, fled and was later found dead, according to the SIU, which investigates deaths and injuries involving police.

The suspect had a gunshot wound, authorities said, but they would not elaborate on the circumstances or cause of his death. An autopsy on the suspect will be conducted on Tuesday, SIU spokeswoman Monica Hudon said.

On Monday evening, Toronto police were executing a search warrant at an apartment in a densely populated neighborhood in east Toronto, where the suspect lived.

A large part of Danforth Avenue reopened for business, after police completed their forensic search of the crime site.

Hours after the fatal shooting, in an apparently unrelated incident, a man with a knife was arrested during a military ceremony on Parliament Hill in Canada’s capital, Ottawa. The Defense Ministry said no one was injured and gave no further details.

A police officer looks for evidence under a car while investigating a mass shooting on Danforth Avenue in Toronto, Canada, July 23, 2018. REUTERS/Chris Helgren

Canadian Prime Minister Justin Trudeau wrote on Twitter on Monday: “The people of Toronto are strong, resilient and brave – and we’ll be there to support you through this difficult time.”

Toronto Mayor John Tory told reporters the city of 2.8 million residents had a gun problem, with weapons too readily available to too many people.

“Why does anyone in this city need to have a gun at all?” he asked in an address to city councilors early on Monday.

Bill Blair, Canada’s newly appointed minister of border security and organized crime, who has been given the job of tackling gun violence, met with Tory on Monday afternoon.

To own a gun in Canada, an individual must apply for a license, pass a background check and pass a firearm safety test. Guns must be kept locked and unloaded and can only be legally carried outside the home with a special permit. Handguns and other restricted firearms require passing an additional course.

Canada’s crime rate rose by 1 percent in 2017, the third consecutive annual increase, according to Statistics Canada. The murder rate jumped by 7 percent, due largely to killings in British Columbia and Quebec, while crime involving guns grew by 7 percent.

Toronto, despite a murder rate lower than that of large U.S. cities, is grappling with a sharp rise in gun violence as gun deaths jumped to 26, up 53 percent so far this year from the same period in 2017. 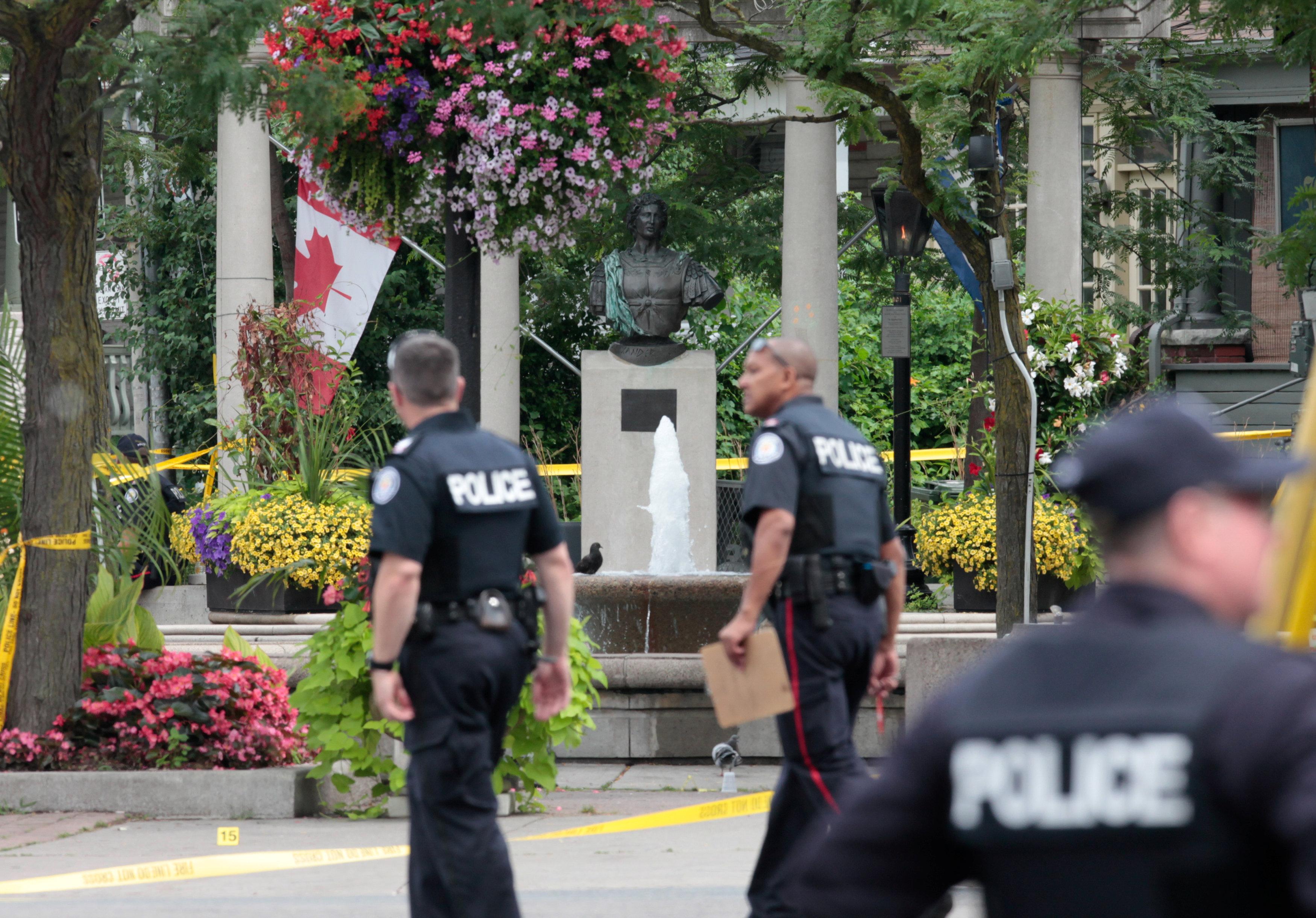 The number of shootings has risen 13 percent. Toronto has deployed about 200 police officers since July 20 in response to the recent spate in shootings, which city officials have blamed on gang violence.