GAZA (Reuters) – Israeli troops shot dead a Palestinian and wounded at least 220 others at protests along the Gaza border on Friday, Gaza health officials said, as diplomats sought to secure a durable ceasefire deal.

Tear gas canisters are fired by Israeli troops towards Palestinian demonstrators as they run during a protest demanding the right to return to their homeland at the Israel-Gaza border, in the southern Gaza Strip August 3, 2018. REUTERS/Ibraheem Abu Mustafa

Over four months of weekly Friday border protests that began on March 30 have reduced in intensity lately but organizers have vowed they would continue until Israel lifts economic sanctions on the coastal enclave.

The Israeli military said troops had responded with “riot dispersal means” and had operated “according to standard operating procedures,” a term that refers to the use of accurate live fire, after some Gazans broke through the border fence and attacked troops with firebombs and an explosive device.

It said some 8,000 Gazans had participated in the protests at five locations along the border.

A Gaza hospital official said of the 220 hurt, 90 suffered wounds as a result of the live fire. The dead was a 25-year-old man.

Palestinian demonstrators carry a mock coffin during a protest demanding the right to return to their homeland at the Israel-Gaza border, in the southern Gaza Strip August 3, 2018. REUTERS/Ibraheem Abu Mustafa

At least 156 Palestinians have been killed in the protests and one Israeli soldier was shot dead by a sniper in Gaza.

flown over from Gaza.

Israeli Prime Minister Benjamin Netanyahu canceled a trip to Colombia next week, his office said, and is due to consult with top ministers on Sunday on proposals to end the tensions, Israeli media has reported.

Some top ranking Hamas officials arrived in Gaza from Egypt late on Thursday to discuss the possible deal but no details have been given. The delegation included the group’s deputy chief, Saleh al-Arouri, exiled by Israel in 2010. 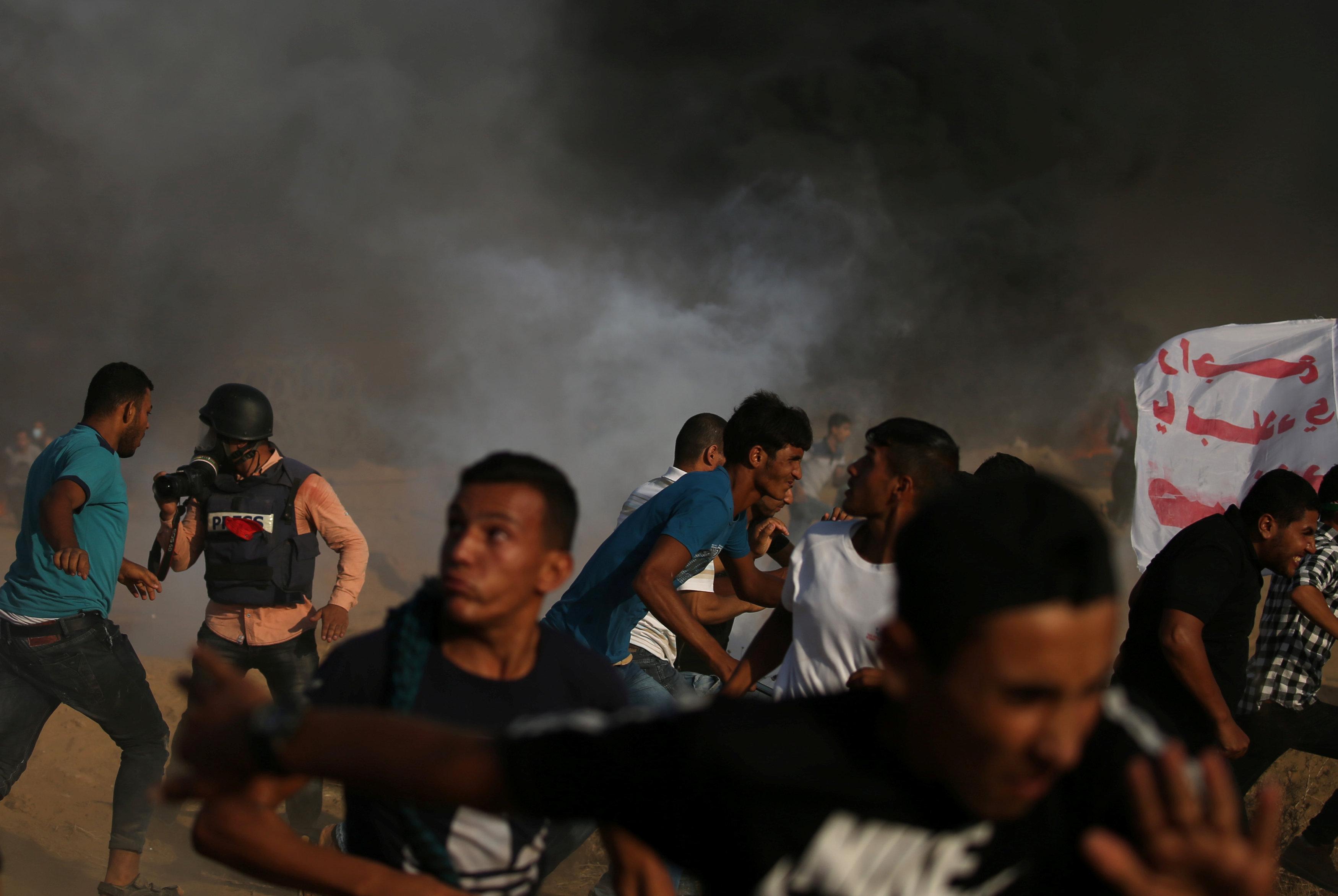 “The delegation will (consult) … over issues of concern for the Palestinian people, foremost in achieving the national reconciliation and ending the Gaza blockade,” Hamas spokesman Fawzi Barhoum said before the delegation arrived.

More than two million Palestinians are packed into the narrow strip which suffers deep economic hardship.

Israel withdrew its troops and settlers from Gaza in 2005, but maintains tight control of its land and sea borders, citing security concerns over Hamas and other militant groups. Egypt also restricts movement in and out of Gaza on its border.

Israel, the United States and other Western countries regard Hamas as a terrorist organization. Israel and Hamas have fought three wars since 2008, the last of them in 2014.

On Sunday, Nickolay Mladenov, the U.N. special coordinator for the Middle East peace process, said on Twitter that he held “productive meetings” with Egyptian officials in efforts to de-escalate Gaza tensions and resolve humanitarian issues.

“The devil is always in the details but we are #movingforward in the interest of #peace,” Mladenov said.

Israeli media said Israel was seeking a long-term commitment from Hamas to end the protests and halt the launch of the incendiary balloons and kites that have destroyed thousands of acres of farmland and forests, in exchange for lifting restrictions on the passage of goods and travel for Gaza.

Speaking about the Hamas delegation’s visit, Hamas political official Hussam Badran said: “We will achieve a national unity of the highest level in order to break (Israel’s) blockade… We want the blockade to end once and for all.”