Hundreds of business leaders are publicly speaking out about the recent surge of new anti-abortion legislation, and female entrepreneurs told INSIDER they’re “angry and saddened” by what many see as an unprecedented assault on women’s health.

In April and May alone, the governors of Louisiana, Ohio, Georgia, Mississippi, Missouri, and Alabama signed some of the most restrictive abortion bans in the country into law. These bans represent the most aggressive anti-abortion activity from states with Republican-controlled legislatures in decades.

None of these new laws or any previous six-week ban states have passed have formally gone into effect and all recently-passed laws are being challenged in court. Under the 1973 Supreme Court decision Roe v. Wade, states currently can’t outlaw abortion before the point of fetal viability.

Read more:Abortion bans are popping up all around the US. Here are the states that have passed new laws to challenge Roe v. Wade in 2019.

While abortion rates have declined in recent years partly thanks to increased contraceptive access,a 2017 study from the Guttmacher Institute, which supports abortion access, found that nearly 1 in 4 US women will have an abortion by the age of 45.

On June 10, executives and leaders from over 187 major corporations including Ben & Jerry’s, Bloomberg, H&M, Postmates, and Slackpublished a full-page ad in The New York Times denouncing the bans after Netflix and Disney made waves by threatening to pull their productions out of Georgia, a major hub of activity for the film industry.

“Restricting access to comprehensive reproductive care, including abortion, threatens the health, independence, and economic stability of our employees and customers,” the letter said.

‘An attack on women’ 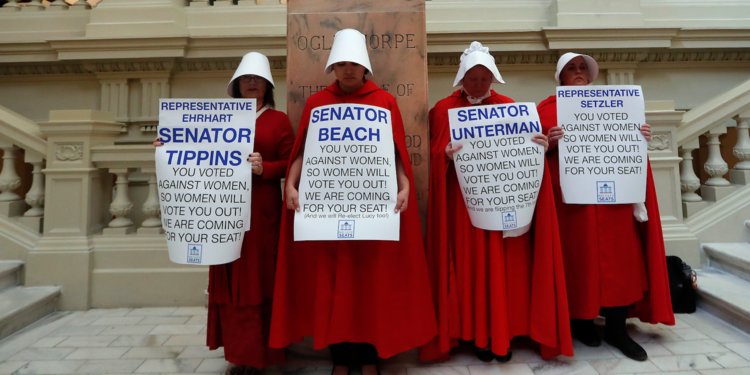 Women protest in Georgia’s state Capitol after the bill banning abortions after a fetal heartbeat is detected passed in both the House and the Senate in April.AP Photo/John Bazemore

A number of up-and-coming female entrepreneurs told INSIDER that they see the bans not only as an affront to women’s healthcare but bad for business.

Carina Glover, who created the platform HerHeadquarters, which helps fellow female entrepreneurs connect and collaborate, told INSIDER she believes laws targeting women’s health have “reached new and unacceptable heights” and send “a terrifying message that freedom of choice is no longer a right available to women, but a privilege only given to those the government deems worthy.”

“We’re angry and saddened, but more importantly, motivated to speak up and fight for a women’s right to choose. Politicians and healthcare companies have owned sexual health and reproductive rights for far too long,” said Tania Boler, the CEO and founder ofElvie, which makes women’s health products including breast pumps and pelvic floor trainers.

Jordana Yellin, the founder of the multi-purpose crowdsourcing platformSupportful, called the laws “a significant step backward for human rights in this country” and “a violation of individual freedoms and an attack on women.”

“Those who want an abortion will still find a way to get one, but now they’re putting themselves at risk by seeking medical help from an unregulated black market,” Yellin added.

The executives who took out The New York Times ad wrote that states threatening strict abortion bans hinder their day-to-do operations and bottom line, saying that restricting access to the procedure “impairs our ability to build diverse and inclusive workforce pipelines, recruit top talent across the states, and protect the well-being of all the people who keep our businesses thriving day in and out.”

Corporations in America are increasingly becoming political actors, between Gilette releasing ads taking on issues like toxic masculinity and gender identity, Nike signing an endorsement deal with Colin Kaepernick, and Yeti Coolers and Delta Airlinessuspending their partnerships with the National Rifle Association,

While Delta — which is headquartered in Atlanta — took a risky stand in breaking with the NRA, they’re still holding off on publicly weighing in on abortion.

Read more:Delta CEO says the company won’t take a stance on anti-abortion laws: ‘This is something that the courts need to settle and resolve, not corporate America’

Theresa Forman, the CEO of creative marketing firmMcMillan, told INSIDER she believes “all executives, and all companies, will increasingly be asked to state their positions on contentious issues and all of us will have to make thoughtful authentic responses.”

Earlier this year,a survey from the Global Strategy Group found that Americans are now associating lots of brands with political parties — and many even expect corporations to take a stand on big political issues.

In all, the GSG report concluded that companies face a greater reward than a penalty for staking out positions on prominent social and political subjects, especially concerning race and gender equality.

Forman agreed, telling INSIDER that “as the public increasingly wants to align themselves with brands who represent and share their values, providing a point-of-view on a social issue — or not providing one — can have a profound impact on brand perception and corporate performance.”

You probably didn’t realize these 33 movies and TV shows all shot in Georgia, and it shows just how much the state could lose by passing its abortion bill