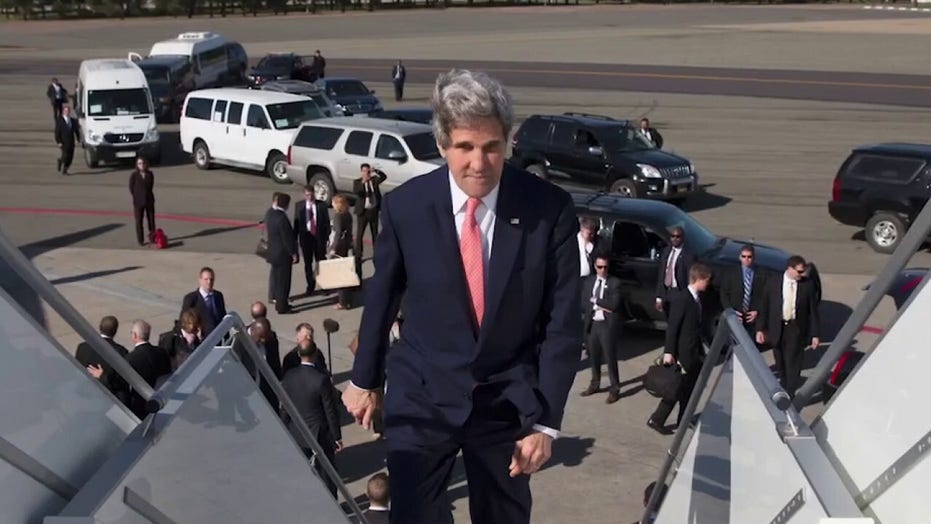 John Kerry showing everyone how hard it is to cut emissions: Lomborg

The White House is reportedly set to discuss carbon emissions reductions with airline CEOs even as it remains silent on the use of a private jet by top climate change adviser John Kerry.

According to Reuters, White House National Climate Adviser Gina McCarthy and economic adviser Brian Deese will have a virtual meeting Friday with the heads of four airlines — American, United, Delta, and Southwest.

It comes as the airlines reportedly lobbied the Biden administration to increase subsidies for low carbon fuel in order to combat climate change.

The Air Transport Action Group has said that air travel contributes just around 2% of global emissions. Private jet travel has come under greater scrutiny amid the climate debate, as elites create a much larger carbon footprint per capita than others who take commercial flights.

JOHN KERRY TOOK PRIVATE JET TO ICELAND FOR ENVIRONMENTAL AWARD, CALLED IT ‘ONLY CHOICE FOR SOMEONE LIKE ME’

Private jets have been estimated to emit upward of 40 times as much carbon per passenger as commercial flights. Fox News previously reported that Kerry’s family jet racked up an estimated 116 metric tons of carbon emissions over the past year.

In 2019, Kerry took a private jet to receive the Arctic Circle award for climate leadership and was questioned on the apparent hypocrisy.

Icelandic reporter Jóhann Bjarni Kolbeinsson confronted Kerry at the event over his choice of transportation, asking: “I understand that you came here with a private jet. Is that an environmental way to travel?”

Kerry defended his high-pollution ride at the time, calling it “the only choice for somebody like me who is traveling the world to win this battle” in an interview obtained by Fox News.

He added: “If you offset your carbon — it’s the only choice for somebody like me who is traveling the world to win this battle.”

“I negotiated the Paris Accords for the United States,” he said, referring to the multilateral climate agreement signed while he was secretary of state under Barack Obama.

“I’ve been involved with this fight for years. I negotiated with [Chinese] President Xi to bring President Xi to the table so we could get Paris. And, I believe, the time it takes me to get somewhere, I can’t sail across the ocean. I have to fly, meet with people and get things done.”

It’s unclear how Kerry has been offsetting his carbon output, as he claimed, but flight logs indicated that his family’s private jet spent over 20 hours in the air over the past year — culminating in an estimated 116 metric tons of carbon emissions.

For comparison, a March 2018 report from Environmental Protection Agency (EPA) estimated that the typical passenger vehicle emits about 4.6 metric tons of carbon dioxide per year. That calculation assumed a car that drives around 11,500 miles per year with a fuel economy of about 22.0 miles per gallon.