White House holds a second day of meetings with Democrats to iron out budget differences. 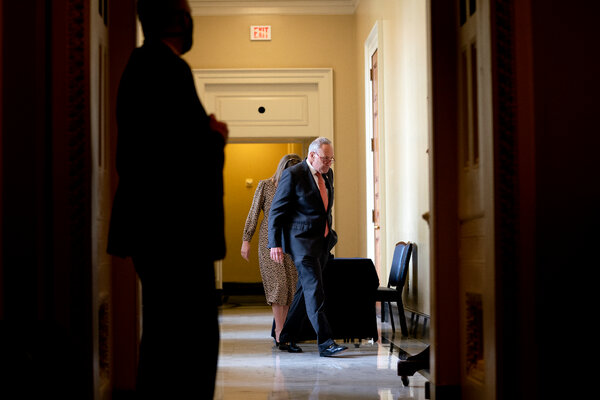 President Biden and his team are expected to continue negotiating with Democrats on Thursday as they race to overcome entrenched divisions over his multi-trillion-dollar domestic policy agenda.

While the White House did not immediately identify who would participate in the meetings, officials said the discussions would focus on advancing both a $1 trillion bipartisan infrastructure bill and a second, $3.5 trillion domestic policy plan.

Party leaders now hope to coalesce around a compromise on the domestic policy package by Monday, when a vote is planned on the infrastructure measure. But agreement on a total cost, which programs to include and which to jettison, and how to pay for it will involve painful choices for an already divided caucus.

Thursday’s talks at the White House come after Mr. Biden spent much of Wednesday in meetings with Democratic leaders and nearly two dozen lawmakers, listening to the concerns of the feuding factions in his party over his two top domestic priorities. Moderates are pressing for quick action on the Senate-passed bipartisan infrastructure bill, while progressives have vowed to withhold their votes for that measure until approval of the far broader social safety net measure that is to include vast new investments in climate, education, health and social programs.

Mr. Biden urged moderates who have balked at the size of that package to put forward an overall spending level that they could support, as well as the priorities they wanted to see funded, according to senators and aides.

Democrats are aiming to pass the legislation on a party-line vote using a fast-track budget process known as reconciliation that shields it from a filibuster and allows it to pass on a simple majority vote. But because of the slim margins of control on Capitol Hill, Mr. Biden needs the support of every Democrat in the Senate and can lose as few as three in the House to win enactment of the plan.

“Democrats have all indicated that we are working on and willing to work on a reconciliation bill,” said Representative Stephanie Murphy of Florida, a moderate who has pushed for a swift vote on the bipartisan infrastructure measure first. “When you’re talking about a bill that touches on all elements of American lives, we should take all the time that is necessary to ensure that we craft a good bill that achieves the goals that it intends.”

But progressive lawmakers who want to see the reconciliation bill completed first pressed Mr. Biden on Wednesday to weigh in with House Democratic leaders against holding a Monday vote on the infrastructure bill. Concerned that their more conservative-leaning colleagues may refuse to support the larger plan once the infrastructure measure is enacted, liberal Democrats have said they will withhold their votes for that bill until the reconciliation plan clears Congress.

“They’ve raised their concerns, and the president said, ‘Let me think about it, let me talk to the speaker and majority leader,’” Senator Ron Wyden, Democrat of Oregon and the chairman of the Finance Committee, told reporters on Wednesday evening. “He made no commitments,” he added. “He heard us out.”

Mr. Wyden said the president had been in a “vintage Joe Biden, let’s-get-it-done mood.”