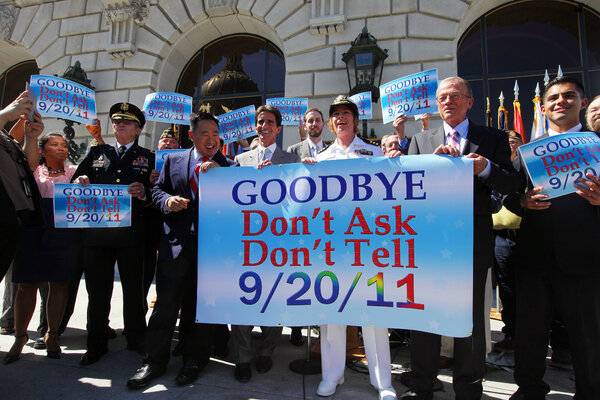 Veterans who were discharged from the military under the “don’t ask, don’t tell” policy may be eligible for full benefits from the Department of Veterans Affairs under new guidance issued on Monday.

The announcement comes on the 10th anniversary of the policy’s repeal by President Barack Obama.

In a blog post on the V.A.’s website, Kayla Williams, the assistant secretary for public affairs in the V.A.’s Office of Public and Intergovernmental Affairs, said that veterans who were given other than honorable discharges based on homosexual conduct, gender identity or H.I.V. status “are considered veterans” who may be eligible for all V.A. benefits. The “other than honorable” discharge blocked tens of thousands of veterans from obtaining the full range of services and care.

“L.G.B.T.Q.+ veterans are not any less worthy of the care and services that all veterans earn through their service, and V.A. is committed to making sure that they have equal access to those services,” Ms. Williams, who is a bisexual veteran, wrote.

Those affected by the policy may now qualify for benefits including guaranteed home loans, compensation and pension, health care, housing assistance and burial benefits, barring any statutory or regulatory issue with their military record.

“Although V.A. recognizes that the trauma caused by the military’s decades-long policy of discrimination against L.G.B.T.Q.+ people cannot be undone in a few short months, the Biden administration and Secretary McDonough are taking the steps necessary to begin addressing the pain that such policies have created,” Ms. Williams wrote, referring to the V.A. secretary, Denis R. McDonough.

“Don’t ask, don’t tell” was a policy enacted in 1994, under President Bill Clinton, that barred openly gay, lesbian and bisexual individuals from serving in the military. The V.A. reported that the policy led to the discharge of an estimated 14,000 service members during the 17 years it was in effect.