For HMS Queen Elizabeth’s maiden deployment, the first-in-class ship will lead the large, multinational Carrier Strike Group 21. The CSG will sail over 26,000 nautical miles and visit 40 countries during the deployment, according to the Royal Navy.

VMFA-211 will integrate with Britain’s 617 squadron, known as the “Dambusters.”

Although the B variant F-35s used by the Marine Corps is built for short takeoff and vertical landings aboard big-deck amphibious assault ships, they have also proven capable of operating off the British Queen Elizabeth-class carriers.

US Marine Corps F-35 pilots have trained alongside their British counterparts aboard HMS Queen Elizabeth, but this will be the first full operational deployment of a US F-35B squadron aboard the British carrier, according to the US Marine Corps.

Last September, VMFA-211 trained alongside the Dambusters at Royal Air Force Marham, where the two squadrons worked together to develop the essential mission skills necessary to function as a combined force for the upcoming deployment.

The US Marine Corps first announced plans to deploy F-35Bs aboard the Queen Elizabeth for a 2021 deployment in 2019. 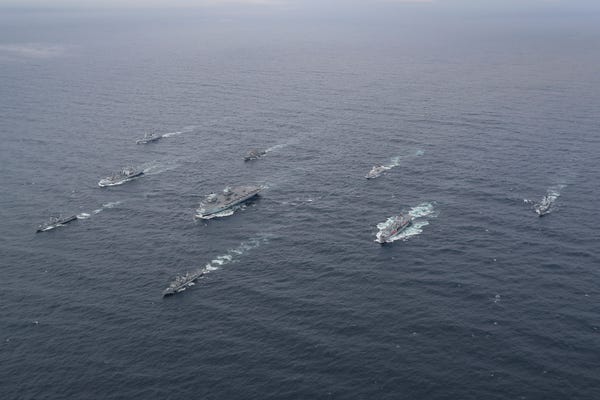 In addition to the 65,000 metric ton British carrier, the CSG with which the US Marines will be operating will include the British destroyers HMS Diamond and Defender, frigates HMS Richmond and Kent, support ships Fort Victoria and Tidespring, and a submarine.

A Dutch frigate and American destroyer will also be a part of the group.

The CSG, which will also include more than 30 aircraft, will be the largest fleet of Royal Navy ships to deploy abroad since the Falklands War.

The deployment is expected to take the group into the Indo-Pacific region, likely through contested waterways like the South China Sea, where China routinely bristles at US aircraft carrier operations. The plan is for the strike group to visit Signapore, South Korea, Japan, and India, among other nations.

UK Defense Secretary Ben Wallace said Monday that “when our Carrier Strike Group sets sail next month, it will be flying the flag for Global Britain.”

He said the CSG will be “projecting our influence, signaling our power, engaging with our friends and reaffirming our commitment to addressing the security challenges of today and tomorrow.”

‘”The UK,” he said, “is not stepping back but sailing forth to play an active role in shaping the international system of the 21st century.”