Turkey’s president suggested that he may ask for the extradition of the 18 Saudi agents held responsible for the killing of journalist Jamal Khashoggi in Istanbul.

Saudi Arabia detained 18 suspects and dismissed a top general after admitting that Khashoggi died in the Saudi consulate. Riyadh attributed the death, however, to a “fistfight.”

Recep Tayyip Erdogan told members of his Justice and Development Party (AKP) on Tuesday: “I propose to file a suit against the 18 people who have taken part in this crime in Istanbul. This is just my proposal.”

Erdogan said that 15 of the 18 men flew from Saudi Arabia to Istanbul the day of the disappearance, while the three others were already in the consulate. 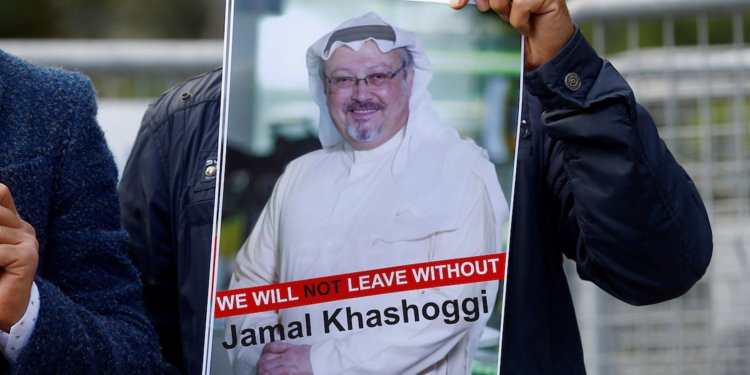 A protester holds a sign saying “We will not leave without Jamal Khashoggi” outside the Saudi consulate in Istanbul on October 5, 2018. Osman Orsal/Reuters

In his Tuesday speech, Erdogan added that he would use Shariah, international, and Saudi law, as well as the help of the Saudi king, to get to the bottom of Khashoggi’s death.

Erdogan said: “I urge the Custodian of the Two Holy Mosques, King Salman bin Abdulaziz, to do what it takes because the crime has taken place in Istanbul and we need to know.”

The “Custodian of the Two Holy Mosques” is a deferential title used in the Islamic world acknowledging King Salman as the ruler responsible of the two holy cities of Mecca and Medina.

The Turkish president added that he would use “Shariah law, international law, and the laws of the Kingdom of Saudi Arabia” in the investigation.

“We are here to do whatever it takes within the law,” he said. 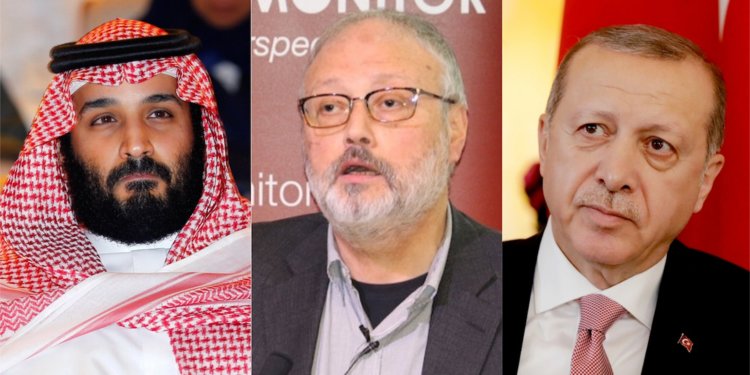 Erdogan on Tuesday also accused Saudi officials of planning the assassination days before Khashoggi entered the Saudi consulate and claimed that the whereabouts of Khashoggi’s body was still unknown.

However, the speech fell short of the promise Erdogan made to reveal the truth about Khashoggi’s case “in all its nakedness.” Authorities promised that Tuesday’s statement would reveal new facts about the killing, but the speech did little to advance the narrative or confirm previous gruesome rumors.

Erdogan did not mention reports of audio and video recordings of Khashoggi being killed, which Turkish intelligence officers have for at least two weeks claimed to have. US and European intelligence officers said they have not received it, and US President Donald Trump has doubted the existence of the footage.

The Turkish president also did not mention the name of Saudi Crown Prince Mohammed bin Salman, who is widely suspected of orchestrating Khashoggi’s killing.

Reuters reported on Monday, citing Turkish intelligence sources, that one of the crown prince’s top aides ran the operation to kill Khashoggi via Skype.

Saudi Arabia has sought to distance its leadership from Khashoggi’s death. On Sunday, Saudi Foreign Minister Adel al-Jubeir told Fox News that the death was the result of a “rogue operation” unknown to Crown Prince Mohammed and the Saudi intelligence services.

Trump's tone shifts on Khashoggi, raising the prospect of US sanctions on Saudi Arabia