“Get well soon, Tiger. You are a true champion!” Trump said, according to former campaign adviser Jason Miller. 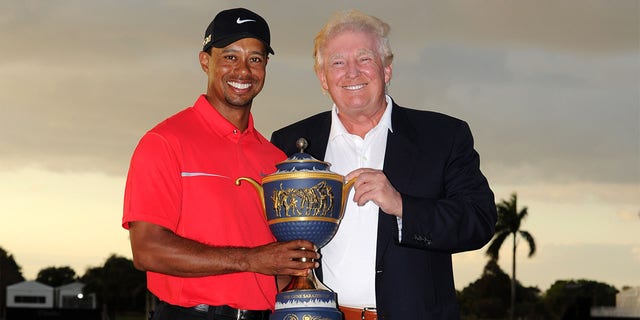 DORAL, FL – MARCH 10: Tiger Woods and Donald Trump pose with the Gene Sarazen Cup after his two-stroke victory during the final round of the World Golf Championships-Cadillac Championship at TPC Blue Monster at Doral on March 10, 2013 in Doral, Florida. (Photo by Stan Badz/PGA TOUR)
(Getty Images)

According to the Los Angeles County Sherriff’s Office, Woods sustained multiple leg injuries and authorities had to use the “jaws of life” to rescue him.

“The vehicle was traveling northbound on Hawthorne Boulevard, at Blackhorse Road, when it crashed. The vehicle sustained major damage,” the department tweeted. “The driver and sole occupant was identified as PGA golfer, Eldrick ‘Tiger’ Woods. Mr. Woods was extricated from the wreck with the ‘jaws of life’ by Los Angeles County firefighters and paramedics, then transported to a local hospital by ambulance for his injuries.”

Woods has reportedly spent hours on the golf course with Trump, who owns multiple courses of his own. They’ve been acquaintances for a number of years, Woods previously said, and the famous golfer backed Trump amid a spat the former president had with other sports figures.

“Well, he’s the president of the United States,” Woods said in 2018 when asked about Trump’s feud with NFL and NBA athletes.

“No matter who is in the office, you may like, dislike personality or the politics, but we all must respect the office.”

Woods was in Los Angeles over the weekend as the tournament host of the Genesis Invitational at Riviera, where he presented the trophy. He was to spend Monday and Tuesday filming with Discovery-owned GOLFTV, with whom he has an endorsement contract.