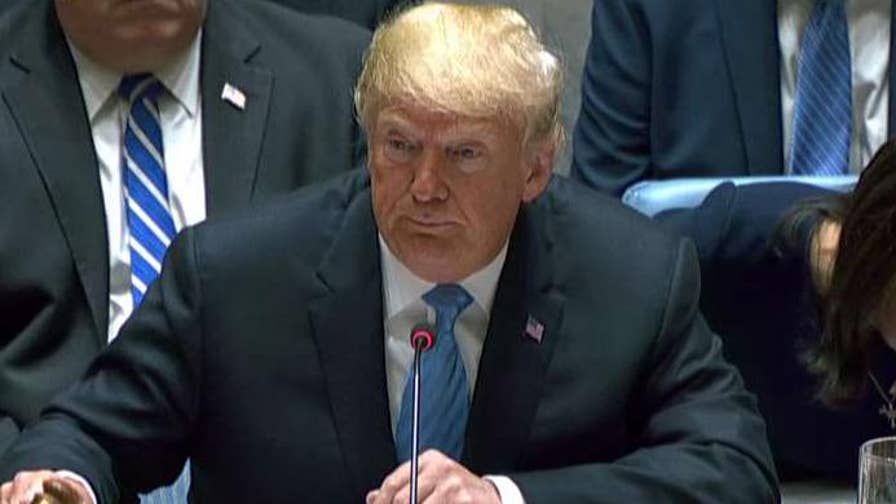 President Trump chairs a meeting on Iran with the 15-member council in New York City.

President Trump took aim at China and Iran while chairing a U.N. Security Council meeting on nonproliferation on Wednesday — accusing China of meddling in the U.S. midterms, and promising sanctions “tougher than ever before” on Iran.

"It illicitly procures sensitive items to advance its ballistic missile program and proliferates these missiles all across the Middle East," he said. "The regime is the world’s leading sponsor of terror, and fuels conflict across the region and far beyond."

While he thanked the trinity for “substantially slowing down their attack on Idlib province,” he warned: “Get the terrorists, but I hope the restraint continues. The world is watching."


At the meeting, he defended his administration’s decision to pull out of the 2015 Iran nuclear deal, and blasted what he called a “horrible, one-sided deal [that] allowed Iran to continue its path toward a [nuclear] bomb and gave the regime a cash lifeline when they needed it the most.”

“They were in big big trouble,” he said. “They needed cash, we gave it to them.”

Trump said that after that, the U.S. "will pursue additional sanctions, tougher than ever before, to counter the entire range of Iran’s malign conduct."

"Any individual or entity who fails to comply with these sanctions will face severe consequences," he warned. 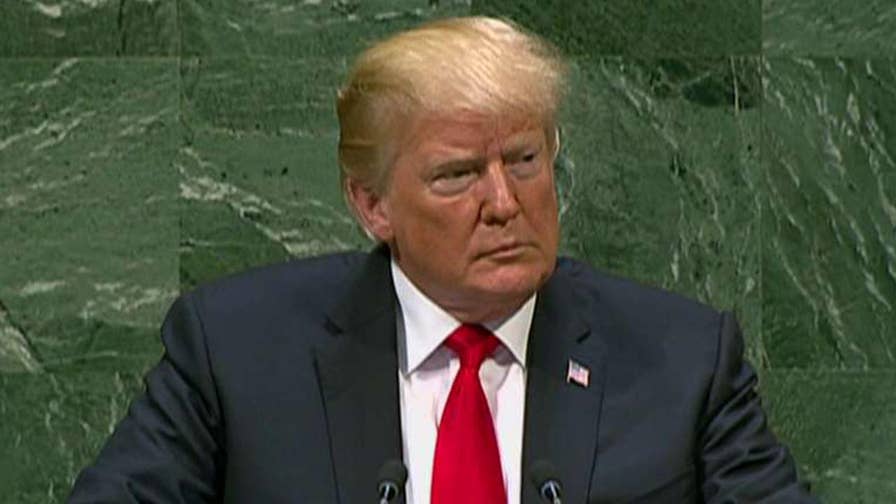 Trump then used the meeting to accuse China of meddling in the November midterms, saying it was pushing back against Trump’s tariffs that he has placed on goods from China entering the U.S.

“Regrettably we found that China has been attempting to interfere in our upcoming 2018 election coming up in November against my administration,” he said.

While Trump did not give any specifics about alleged interference, he seemed to referring back to a point he made in a tweet earlier this month when he accused China of “actively trying to impact and change our election by attacking our farmers, ranchers and industrial workers because of their loyalty to me.”

Chinese Foreign Minister Wang Yi responded to Trump’s comments at the meeting, saying that China follows a principle of non-interference in other countries domestic affairs.

Trumps’ remarks come a day after a fiery speech to the U.N. General Assembly, where he also had harsh words for Iran.

In turn, Iranian President Hassan Rouhani took aim at Trump, and even his decision to call the Security Council meeting.

"It is unfortunate that we are witnessing rulers in the world who think they can secure their interests better — or at least in the short-term ride public sentiments and gain popular support — through the fomenting of extremist nationalism and racism, and though xenophobic tendencies resembling a Nazi disposition, as well as through the trampling of global rules and undermining international institutions; even through preposterous and abnormal acts such as convening a high-level meeting of the Security Council," he said.

Adam Shaw is a reporter covering U.S. and European politics for Fox News.. He can be reached here.

China keeps buying Iranian oil, and the trade war adds a reason to defy US sanctions

Trump fires back at Obama, boasts he’s got ‘magic wand’ on economy