As President Donald Trump headed to Brussels to meet with the members of the world’s most powerful military alliance, NATO published its latest estimates on defense spending.

The NATO report estimates that only five out of the 29 nations will meet the spending standards that were agreed upon at the 2014 NATO summit in Wales.

The pledge called for all allies to stop cutting defense budgets, gradually increase spending and aim to spend 2 percent of their GDP on defense by 2024.

Since the 2014 summit, the majority of allies have increased defense spending, with Lithuania, Latvia, Romania, Bulgaria and Turkey leading the way. 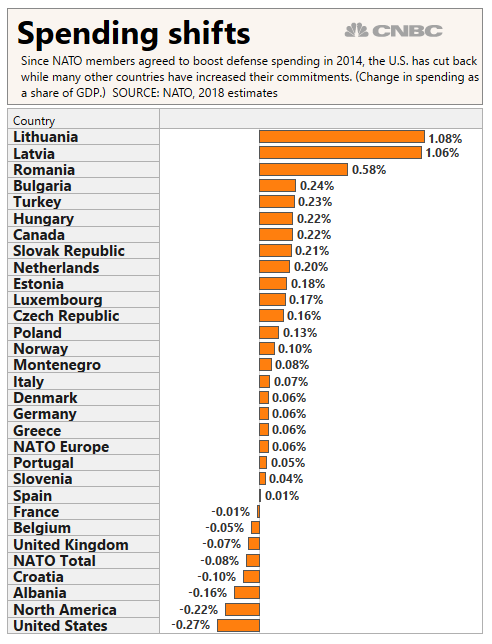 In 2017, the U.S. accounted for 51.1 percent of NATO’s combined GDP and 71.7 percent of its combined defense expenditure. In short, the U.S. contributed more funds to NATO than Germany, France, Italy, Spain, the United Kingdom and Canada combined.

And while U.S. spending in constant dollar terms has risen slightly since 2014, its share of NATO’s overall spending has fallen. When measured as a share of gross domestic product, the U.S. still spends more than the 2 percent target. But its contribution has fallen from 4.78 percent of GDP in 2011 to 3.50 percent this year, according to figures provided by NATO.

Trump, who has threatened to reduce U.S. military support if allies do not increase spending, pushed for the 28 other NATO members to spend more money again on Tuesday.

“NATO countries must pay MORE, the United States must pay LESS,” Trump said in a tweet Tuesday. Before boarding Marine One on the White House lawn, Trump told reporters that “NATO has not treated us fairly, but I think we’ll work something out.”

“Every one of our allies, 100 percent, are increasing defense spending, and so that is something we will talk about as an achievement, but also we need to do more,” Hutchison said, describing the funding as “the biggest increase in defense spending by our allies since the Cold War.”