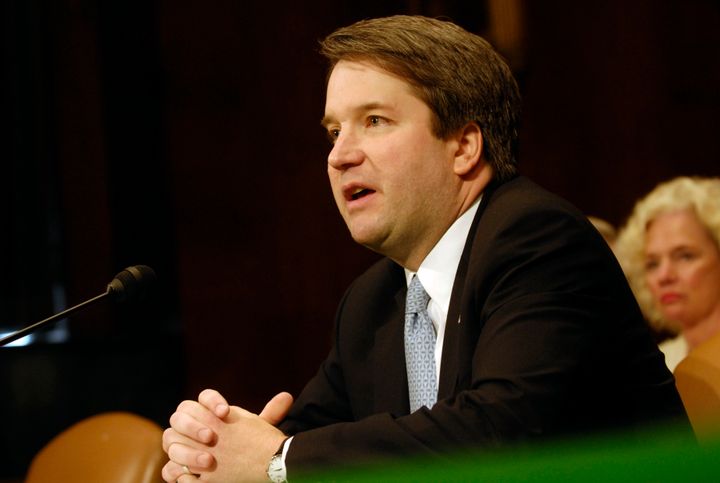 President Donald Trump on Monday nominated Brett Kavanaugh to the Supreme Court in a move that could turn the “swing vote” of retiring Justice Anthony Kennedy into a staunchly conservative vote on cases before the court.

“He is considered a judge’s judge, a true thought leader among his peers,” the president said from the East Room of the White House. “There is no one in America more qualified for this position and no one more deserving. … Judge Kavanaugh deserves a swift confirmation and robust bipartisan support.”

If confirmed, the 53-year-old U.S. circuit judge could tilt the balance of the court in a solidly conservative direction for decades to come, likely affecting decisions on abortion, partisan gerrymandering, affirmative action, gay rights and capital punishment.

Kavanaugh, who said no other president had “ever consulted more widely” for Supreme Court candidates than Trump, pledged to honor the Constitution and touted the independence of the judiciary several times after he was introduced.

“My judicial philosophy is straightforward: A judge must be independent and interpret the law, not make the law,” he said. “A judge must interpret the Constitution as written, informed by history and precedent.”

However, Kavanaugh’s position on strong executive power and his role in partisan political battles, including independent counsel Kenneth Starr’s investigations into President Bill Clinton and the high court’s decision on the 2000 presidential election recount, are set to dominate what’s shaping up to be an extraordinarily contentious confirmation hearing. But Democrats lack the votes to block his confirmation in the Senate, and Senate Majority Leader Mitch McConnell (R-Ky.), who refused to schedule hearings for President Barack Obama’s pick for the Supreme Court in 2016, is expected to put Kavanaugh on the fast-track to confirmation.

“I will tell each senator that I revere the Constitution. I believe that an independent judiciary is the crown jewel of our republic,” the judge said. “If confirmed by the Senate, I will keep an open mind in every case. And I will always strive to preserve the Constitution of the United Starts and the rule of law.”

Trump said he did not ask his nominee how he planned to vote in cases.

“What matters is not a judge’s political views but whether they can set aside those views to do what the law and the Constitution require,” the president said. “I am pleased to say that I have found without doubt such a person.”

Kavanaugh has been a long-rising star in conservative circles. After graduating from Yale Law School and serving out three prestigious clerkships, he made his first splash in Republican politics as part of the multipronged investigation into Bill and Hillary Clinton, led by Starr, in the 1990s.

Kavanaugh co-wrote a portion of the final Starr Report that made the case for Clinton’s impeachment. He also led the inquiry into the death of Vincent Foster, the deputy White House counsel whose suicide became the subject of tabloids and conspiracy theories (at times peddled by Trump himself).

Two years later, Kavanaugh was part of George W. Bush’s legal team in the fight over the 2000 presidential election recount. After a Supreme Court victory for Bush essentially meant the electoral defeat of Democratic nominee Al Gore, Kavanaugh took up various roles in the Bush White House, including in the Office of the White House Counsel.

Bush nominated Kavanaugh in 2003 to a seat on the U.S. Court of Appeals for the District of Columbia Circuit, a position often viewed as a stepping stone to the Supreme Court. But Kavanaugh’s nomination was heavily contested in the Senate ― Democrats accused him of being too partisan ― and his confirmation to the appellate court stalled for almost three years.

“The bottom line seems simple: This nomination appears to be judicial payment for political services rendered,” Sen. Chuck Schumer (D-N.Y.) said during the initial set of confirmation hearings in 2004.

During a second confirmation hearing two years later, Democrats again voiced deep concerns. “From the notorious Starr report to the Florida recount … if there has been a partisan political fight that needed a very bright legal foot soldier in the last decade, Brett Kavanaugh was probably there,” Schumer said in 2006.

Kavanaugh pushed back against the accusation. “I firmly disagree with the notion that there are Republican judges and [Democratic] judges,” he said. “There is one kind of judge. There is an independent judge under our Constitution.”

On the D.C. Circuit bench, Kavanaugh emerged as an outspoken champion of unitary executive theory, which allows for effectively unchecked presidential power over the executive branch. Kavanaugh has argued that a president shouldn’t be burdened by lawsuits, investigations and indictments, a position that may be of great interest to the White House as special counsel Robert Mueller continues his investigation into Russian meddling in the 2016 election.

“Whether the Constitution allows indictment of a sitting President is debatable,” Kavanaugh wrote in a 1998 article that argued that impeachment, not criminal prosecution, is the appropriate mechanism to hold a president accountable for criminal acts. About a decade later, Kavanaugh wrote in a Minnesota Law Review article that he believes a president “should be excused from some of the burdens of ordinary citizenship while serving in office.” He also argued that an indictment of a president would “cripple the federal government,” rendering it “unable to function with credibility” domestically and internationally. Such an outcome, Kavanaugh said, “would ill serve the public interest, especially in times of financial or national security crisis.”

Kavanaugh’s most prominent opinion on abortion rights came in 2017 when he wrote in dissent not to allow an undocumented teenager to seek an abortion while in federal custody at the U.S. border in Texas. Kavanaugh argued that the judges in the majority had created a new right for undocumented immigrant minors in U.S. government custody “to obtain immediate abortion on demand.” He emphasized instead the government’s “permissible interests” in “favoring fetal life” and “refraining from facilitating abortion” ― language that certainly appeals to opponents of abortion rights.

Kavanaugh’s use of the term “abortion on demand” ― coded language used by anti-abortion activists ― signifies a hostility to reproductive rights in general.

Kavanaugh also dissented with the majority in Priests for Life v. U.S. Department of Health and Human Services, arguing that the Obama administration had imposed a “substantial burden” on the rights of religious groups by requiring them to include birth control coverage in their health insurance plans.

A former law clerk for Kavanaugh who now works for the anti-abortion legal group Thomas More Society wrote in an op-ed that Kavanaugh is the strongest possible choice for a president who hopes to overturn Roe.

“On the vital issues of protecting religious liberty and enforcing restrictions on abortion, no court-of-appeals judge in the nation has a stronger, more consistent record than Judge Brett Kavanaugh,” she wrote. “On these issues, as on so many others, he has fought for his principles and stood firm against pressure. He would do the same on the Supreme Court.”

Kavanaugh’s hundreds of opinions during his 12 years on the D.C. Circuit were reliably conservative.

Kavanaugh “has written almost entirely in favor of big businesses, employers in employment disputes, and against defendants in criminal cases,” noted Adam Feldman, a lawyer who publishes the Supreme Court analysis blog Empirical SCOTUS. Kavanaugh was also a consistently vocal critic of President Barack Obama’s environmental protection rules. But two of his opinions upheld Obama’s signature legislation, the Affordable Care Act. However, he did later rule in support of religious organizations in a separate case against the ACA four years later.

The confirmation process can be long and arduous. The nominee first faces a bipartisan Senate committee, which will issue a recommendation to the full Senate following their hearing. That is followed by a debate and vote by the full Senate. Kavanaugh will need at least 51 votes to receive confirmation. Republicans hold exactly 51 Senate seats ― enough to speedily confirm the nominee if they find Democratic support or no more than one Republican senator votes no (Vice President Mike Pence can cast a vote to break a tie).

While the vast majority of Republican senators are expected to vote in alignment with Trump’s pick, there are a handful who have at times voted against Trump’s wishes. Those senators include Susan Collins (Maine), Bob Corker (Tennessee), Jeff Flake (Arizona), Lisa Murkowski (Alaska) and Ben Sasse (Nebraska). Further complicating reaching the 51-vote threshold is the health of Sen. John McCain (R-Ariz.), 81, who is suffering from brain cancer and hasn’t been in Washington, D.C., in months.