Trump makes no mention of DeSantis at Florida rally

Former President Donald Trump hit all the high notes at his second campaign style rally since leaving the White House.

Trump, holding court at the Sarasota Fairgrounds in southwest Florida in front of a enthusiastic and loud crowd, took aim at his successor, President Biden, as he spotlighted the issues of crime and immigration. Trump charged that “our streets are being overtaken by vicious thugs and bloodthirsty criminals,” and claiming that “our border is being erased before our very eyes.”

A week after he held his first post presidency rally in Ohio, Trump on Saturday night also spotlighted the culture wars, arguing that “Critical Race Theory is being shoved down our children’s throats and into the ranks of our military.” And he zeroed in on the political battle over transgender rights, emphasizing that “men are allowed to play in women’s sports, so unfair, so crazy.” 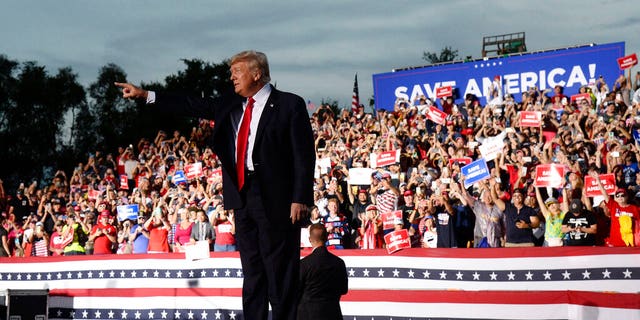 He also once again teased a potential 2024 presidential run to try and return to the White House,  saying “we are looking at the election, more than looking at it,” which elicited cheers from the crowd.

And the former president jabbed at New York City prosecutors for their move Thursday to indict the Trump Organization and its chief financial officer on tax fraud and conspiracy charges, calling it “prosecutorial misconduct.”

But there was one glaring omission from the former president’s roughly 90 minute speech in the Sunshine State – he didn’t mention his ally and fellow Republican – Florida Gov. Ron DeSantis.

While he gave shoutouts and highlighted plenty of his political allies in Florida, Trump stayed quiet about DeSantis, who didn’t attend the rally. While Trump was in Sarasota, the governor stayed in Surfside, on Florida’s Atlantic coast, as he attended services for victims of the horrific condominium collapse.

“He spoke with President Trump, who agreed that it was the right decision, because the governor’s duty is to be in Surfside,” DeSantis press secretary Christina Pushaw said.

And in an interview on Newsmax ahead of his rally, Trump said that he told the governor not to attend.

DeSantis – a conservative congressman who was narrowly elected Florida governor in 2018 thanks in part to support from Trump – has seen his popularity surge among Republican voters in Florida and around the nation, thanks in large part to his steering of his state amid the coronavirus pandemic and his combative pushback against COVID restrictions.

That’s fueled speculation about possible national ambitions and a potential 2024 Republican presidential nomination run by DeSantis. And DeSantis recently edged out Trump in a 2024 straw poll at a conservative gathering in Colorado. That could eventually put the two allies on a potential collision course.

DeSantis and his political team swiftly played down speculation of any tension between the governor and the former president.

Helen Aguirre Ferré, the executive director of the Republican Party of Florida who previously served as the governor’s communications director, on Thursday strongly pushed back against a report that the governor’s office had asked Trump and his team to cancel the rally in the wake of the building collapse.

She emphasized that “the governor is completely supportive of the rally” and stressed that “it’s absolutely untrue that there’s a rift,” between DeSantis and Trump.

Trump to speak at CPAC

The former president will likely once again grab the national spotlight next weekend, as he’s the featured speaker Sunday, July 12, on the final day of a Conservative Political Action Conference (CPAC) event that’s being held in Dallas, Texas.

Trump gave his first post-presidency address in late February as he spoke at CPAC in Orlando, Florida.

The former president was also in the headlines this past week, as he teamed up with Gov. Greg Abbott of Texas. 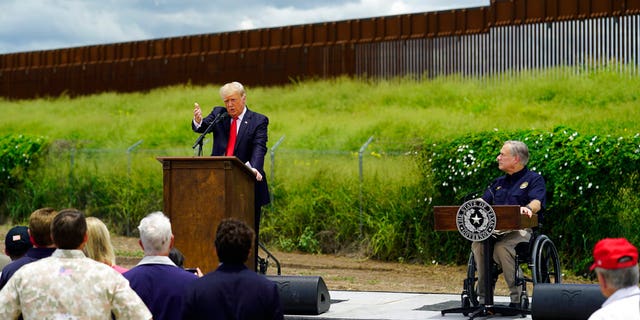 The two Republican leaders took aim at Biden’s immigration polices as they held an event at an unfinished portion of the border wall along the U.S.-Mexico border.

South Dakota Gov. Kristi Noem announced this past week that she was sending 50 National Guard troops from her state to Texas to help “secure” the border.

Noem, a conservative politician and ally of the former president, is seen by pundits as a possible 2024 White House hopeful.

But the governor’s move grabbed more attention over reports – confirmed by her office – that the deployment of the guard troops to Texas was being funded by a GOP mega-donor’s nonprofit organization.

And two announcements over the past week will only ignite more speculation around the former Florida governor.

The Polk County, Iowa GOP announced that Scott will keynote their Lincoln Dinner on July 31. It will be Scott’s second stop this year in Iowa, the state whose caucuses kick off the presidential nominating calendar.

And the Belknap County, New Hampshire GOP alerted that the senator will headline their fundraising gala on August 21. New Hampshire for a century’s held the first primary in the race for the White House and for the past 50 years has done second in the nominating calendar following Iowa.

Former New Jersey Gov. Chris Christie, who ran for the 2016 GOP presidential nomination and is mulling another bid in 2024, is coming out with a new book on Nov. 16.

The title: “Republican Rescue: Saving the Party from Truth Deniers, Conspiracy Theorists, and the Dangerous Policies of Joe Biden.”

Threshold, a conservative arm of the publisher Simon and Schuster, is releasing the book.

Cotton and Grassley do pushups

While no 2022 or 2024 news was made at the event, the two senators grabbed attention for taking part in a pushup contest.

While on stage at the event, Grassley encouraged Cotton to join him and attempt 22 push-ups, in honor of the 22 veterans who commit suicide on average each day, he said.

“Well I’m 87 so you gotta give me a little leeway,” Grassley stated.

The two then did 22 push-ups face-to-face as the state’s other Republican senator, Joni Ernst, 50, counted.