Trump Kicks Off Re-Election Campaign: Get Ready for ‘Billionaire Populist II: The Sequel’

Most coverage of Donald Trump’s re-election campaign to date has focused on polls, specifically two: a Fox survey that showed Trump losing to Joe Biden and Bernie Sanders in a hypothetical one-on-one (but beating other Democrats) and Trump’s own internal polling that, to the glee of reporters, leaked, showing him trailing Biden by a ton in a head to head matchup.

The latter revelation was particularly humorous given that Trump later tweeted that “only fake polls” showed him behind the “Motley Crew,” his new term for the Democratic field.

Polls aside, Trump’s launch is already notable for the themes he’s choosing to stress. He released a video Monday re-hashing his 2016 populist formula. It’s not often that a sitting president promises to take on Washington, but he did it. “We’re taking on the failed political establishment and restoring government of, by and for the people,” it says. “It’s the people, you’re the people, you won the election.” We should expect more rhetoric along these lines tonight. 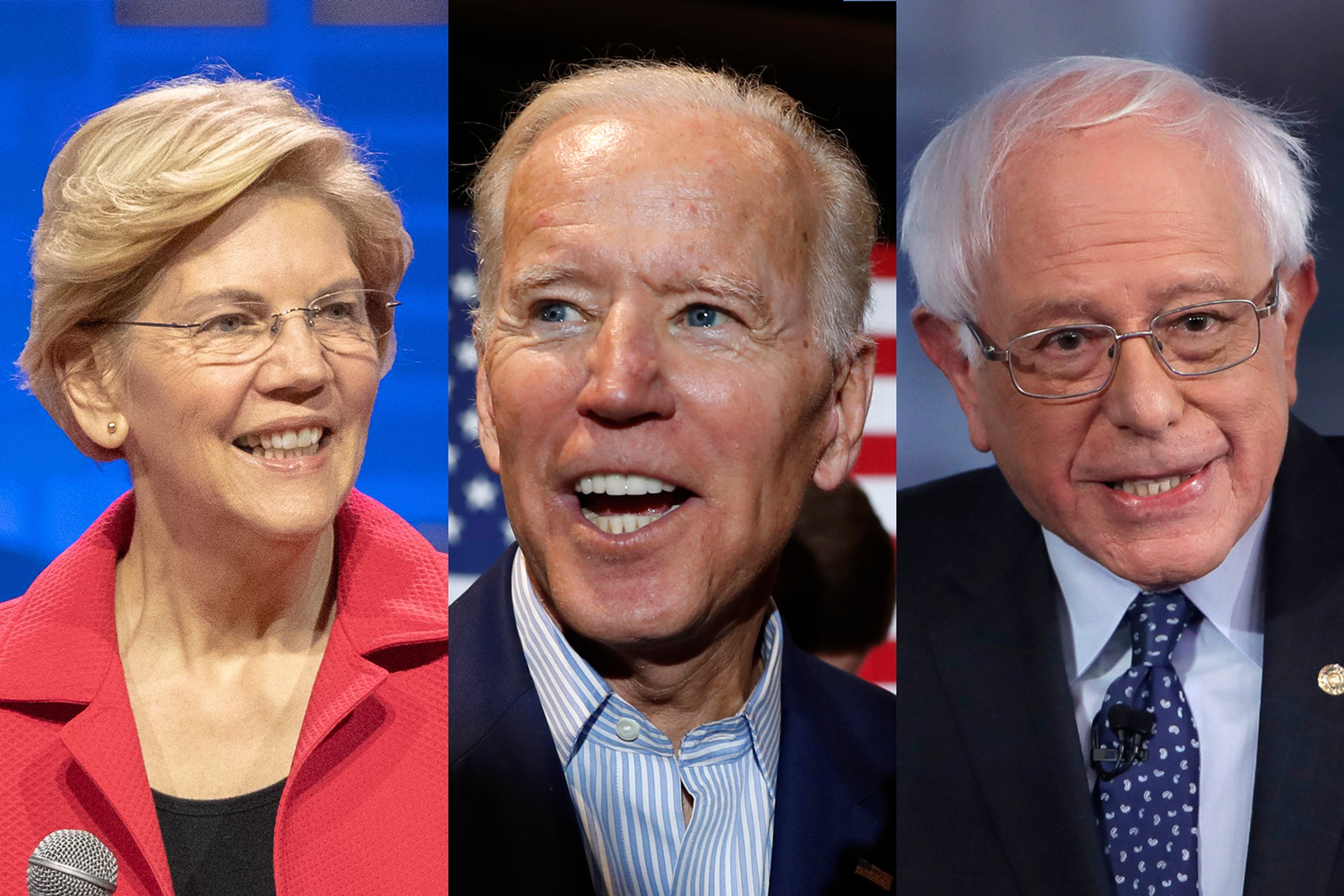 Trump Confirms He Would Accept Foreign Dirt on 2020 Opponent. What Now?

Last time, it was an awesome display of chutzpah when the billionaire scion of inherited wealth ran and won as a champion of the common voter. If he manages to repeat the feat this time by running from inside the White House as a political insider — while doing one-hour ABC specials bragging about how awesome it is to travel by Air Force One and Marine helicopter — it might be time to admit Trump’s only peer in the annals of con artistry will be the guy who sold the Eiffel Tower twice.

That Trump continues to present himself as a populist isn’t surprising, since it worked last time. What’s interesting is that much of the Democratic field appears to be gearing up to use the same strategy. This would be a departure from 2016, where the battle lines coalesced around a theme that ultimately cut against Democrats: experience and competence versus change and upheaval. Trump ran on blowing it all up and won.

This time around, Democratic campaigns seem to recognize voters are still in detonation mode. Yahoo Finance just ran a piece describing the 2020 race as likely to be “competing visions of economic populism between Senator Bernie Sanders and President Donald Trump.”

This doesn’t mean the general election will be between Trump and Sanders. It does however suggest that the substantive issues of next summer’s national debate will revolve around whose campaign provides the most plausibly sweeping corrective to the failures of modern American capitalism.

As Yahoo puts it: “In a development that experts say is a reflection of the public’s increasingly fraught relationship with unfettered free markets, virtually all major Democratic contenders have pushed populist platforms.”

If there’s an early theme to the Democratic stumpery in places like Iowa, it’s been the idea of using the government to intervene in the markets to correct systemic inequities, using policies that would have been non-starters just a few years ago.

With the proposal of his “Economic Bill of Rights,” Sanders has planted a flag firmly on one side of the debate, offering guarantees for housing, a job with a $15 per hour fair wage, single-payer health care, and retirement.

Numerous candidates have proposed some version of a “Green New Deal,” with Washington governor Jay Inslee stressing the issue the most. His spokesperson Jamal Raad calls Inslee’s plan a “full-scale mobilization of the federal government to defeat climate change,” one that includes a plan to create 8 million jobs over 10 years.

Former Housing Secretary Julián Castro toured a trailer park in Waukee and talked about spiking rents, promising relief. Calling affordable housing a “human right,” Castro has proposed tax cuts for anyone paying more than 30 percent of their income toward housing.

On the education front, 18 of the 23 Democratic candidates have come out in favor of some form of free college tuition, with Castro, Elizabeth Warren, and Sanders promising free tuition at all public higher institutions. Multiple Democratic candidates have endorsed a federal jobs guarantee program, with Sanders, New York Senator Kirsten Gillibrand, and New Jersey’s Cory Booker being the most vocal. This comes on the heels of polls showing majorities of voters in all 50 states being in favor of some kind of jobs guarantee program — even states won by Trump.

On health care, many of the candidates claim to be in favor of Medicare-for-All, including Booker and California’s Kamala Harris, both co-sponsors of a Sanders Medicare-for-All bill (although those two have walked back their support somewhat).

A few candidates have gone to places even Sanders has not. Entrepreneur Andrew Yang’s plan is to pay $1000 a month in Universal Basic Income or, as he calls it, a “freedom dividend.”

“Who can be against a freedom dividend?” he’s said. “What kind of asshole do you have to be?”

The Trump version of interventionist populism is a little less ideological and a little more opportunistic, similar to an Asiatic khan who hands out camels when he hears grousing inside a tent. Earlier this year, Trump was on his way to visit an LNG plant in Louisiana and had to cross a bridge over the Calcaisieu River. Unimpressed with what he saw, he ended up offering Louisianans money for a new bridge if elected. He just signed a bill for $19 billion in disaster relief for the Florida panhandle, and when his trade war with China resulted in a threat of retaliatory tariffs against American agribusiness, Trump doled out $16 billion in aid to farmers.

Trump’s populist credentials owe a lot to his omnivorous borrowing from the rhetoric of countless anti-establishment campaigns, past and present — from the anti-interventionism of Ron Paul, to the “outside the box” campaign of fellow non-politician Herman Cain, and even to Sanders, whom he often praised on the trail, seemingly as a way to tweak Hillary Clinton (Trump said at one point in April of 2016 that Bernie was “telling the truth” about Hillary).

“Invisible Americans” was itself an echo of Bill Clinton’s “forgotten middle class” concept, which in turn was an echo of Richard Nixon’s “silent majority,” etc. Campaign faux-populism is so constantly recycled, it’s often difficult to trace the original author of the false promises.

In 2015-2016, Trump’s prescriptions for change often involved pledges to get on the phone and alter history with the force of his Trumpiness. The Ford motor company planning to move a plant to Mexico? “I wouldn’t let it happen,” candidate Trump promised.

Trump also promised to take on the Wall Street guys who were “getting away with murder,” and jack up their taxes. “The hedge fund people make a lot of money and they pay very little tax,” he said as a candidate. “I want to lower taxes for the middle class.” He went after both Ted Cruz and Hillary Clinton for ties to Goldman Sachs.

Years later, we know how a lot of this turned out. He didn’t raise taxes on the rich, but did the opposite, giving them a historic tax break (middle class voters will see some cuts, just not as much). Soon after election, he put a slew of the same Goldman execs he railed against as a candidate in his White House. As a result you’ll see a lot of quotes like one from former Obama official Karine Jean-Pierre, who said voters “just won’t buy” Trump as an outsider going forward.

But there’s been so much upheaval, conflict, and overall weirdness in America in the last two years that Trump may end up benefitting just from the perception of things being different. A CNN poll from earlier this year showed 76 percent of Americans believed Trump created “significant changes” in the country, and the split on whether those changes were positive versus negative was blurrier than you’d guess — 33 percent in favor, 37 percent against.

Those numbers don’t sound all that great for Trump, until one considers that voters last time consistently said they supported change even if they didn’t know what the change in question would be. Trump, just by being Trump, has a path to winning the “change agent” mantle in any theoretical general election matchup.

It’s why people like Trump campaign manager Tim Murtaugh are able to say, without irony, that Trump “promised to go to Washington and shake things up, and he certainly has.” If Barack Obama offered Hope and Change, Trump mostly just offers change — but his underestimated strength as a politician is that he’s always understood a lot of America is crazy, pessimistic and depressed enough to settle just for that.

Democrats in 2016 ran on not being Donald Trump, which seemed at the time like it should be enough. There are polls out already this time suggesting the same strategy could work this time. That’s probably dangerous thinking. Democrats promising radical action meanwhile are probably on to something, not just as a way to re-take the White House, but because the country needs and wants it. Major structural reform is long overdue in America, and if Democrats don’t promise it, just watch tonight — Donald Trump will.

Trump: ‘I Dream About Biden’ Running For President In 2020

The Republican Who Wants to Defeat ‘Malignant Narcissist’ Trump