Trump hits the AP as media fact-check his nonstop interviews 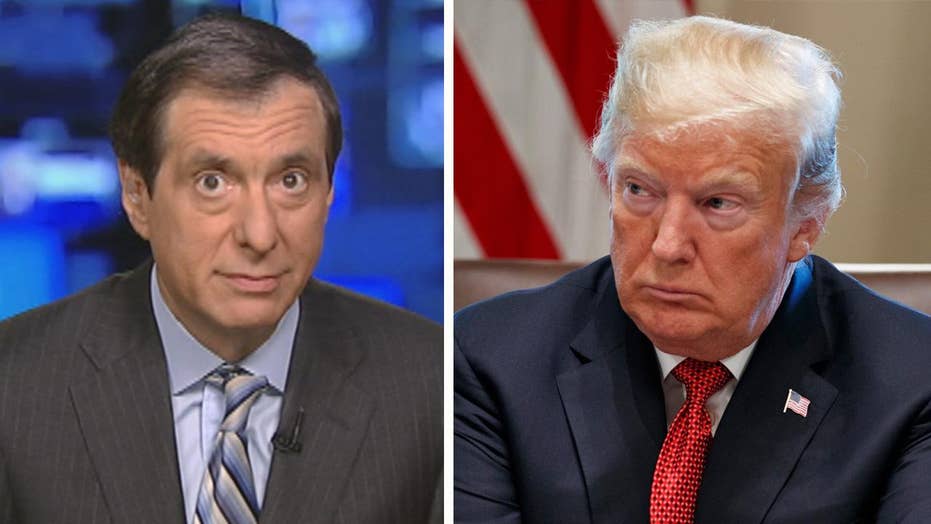 As President Trump continues his midterm media blitz, he is sharpening his language against the press even as some of its practitioners ramp up their criticism of his claims.

This was inevitable, given the sheer volume of words that the president is putting out there and the journalistic desire to fact-check the hell out of him.

In one dispute, I have to say, Trump is basically right.

While he is making this FBN week, with back-to-back sessions with Stuart Varney and Trish Regan of Fox Business Network, Trump also did a lengthy interview with the AP. It was a solid and substantive sitdown. But then the Associated Press slapped this headline on the story:

That's pretty eye-catching, a preemptive alibi less than three weeks before the midterms. It got picked up by Drudge and a whole lot of other places. But it doesn't match what Trump said.

Asked if he would accept any responsibility if the Democrats capture the House, the president responded:

"No, I think I'm helping people. They would say that in the old days that if you got the support of a president or if you've got the support of somebody it would be nice to have, but it meant nothing, zero. Like literally zero. Some of the people I've endorsed have gone up 40 and 50 points just on the endorsement."

Come on: "No, I think I'm helping people" is not even close to "I won't accept responsibility if my party gets shellacked." Trump didn't even address the possibility of the GOP losing the House. That's the wire-service equivalent of clickbait. (Though I'd like to see any candidate who went up 50 points [!] based on a Trumpian endorsement.)

Trump is on shakier ground with his response about the budget deficit. It's ballooned to $779 billion, a 17 percent jump and the highest in six years. The administration's own projections say the deficit will top a trillion dollars in 2020. And while the deficit has faded as a political issue — used mainly by the out party to bash the in party — that tide of red ink is basically unsustainable.

Trump told the AP he had "no choice" because "I had to take care of our military." He said the administration also had to deal with "a tremendous number of hurricanes and fires" and that "now we're going to start bringing numbers down."

First, boosting spending on defense is a choice — a defensible choice, to be sure — but a political decision that adds to the deficit. And that's especially true if you simultaneously slash corporate and individual taxes by $1.5 trillion. The notion that the tax cuts would pay for themselves has not been proven true, at least so far.

Trump asked his Cabinet members yesterday to come back with 5 percent budget cuts, but made clear that the Pentagon would barely be touched, if at all. So having cut taxes and raised defense, he will now go after domestic spending — precisely the argument the two parties have been having for decades.

And then the AP got to the Stormy Daniels insult:

"Sir, as the president of the United States, is it appropriate to call a woman, and even one who is making serious allegations and who you are in litigation against, to call her a horseface?"

Trump's response: "You know what? You can take it any way you want."

"How should we take it?"

"Did you see the letter?" Trump asked. "She put out a letter. I had nothing to do with her. So she can lie and she can do whatever she wants to do. She can hire a phony lawyer. You take a look at this guy, a stone-cold loser. Take a look at his past. They can say anything about me. I'm just saying, I just speak for myself. You take a look, and you make your own determination."

So the criticism is justified, but where's the media and liberal outrage over the rapper T.I.?

This guy posted a video of himself in the Oval Office with a Melania look-alike who walks in, starts stripping (it's R-rated) and then begins attending to T.I. It is beyond demeaning.

Melania spokeswoman Stephanie Grisham called it "disrespectful and disgusting to portray her this way simply because of politics. These kinds of vulgar attacks only further the divisiveness and bias in our country — it needs to stop."

This is the first lady we're talking about. So anyone who's disgusted by the slam against Stormy should find this mocking of Melania equally gross.

Newspapers across U.S. rebuke Trump for attacks on press