The Trump campaign was quick to praise President Donald Trump’s nomination for the Nobel Peace Prize this week.

But in its haste, it misspelled the word “Nobel” as “Noble” in the series of ads that it paid hundreds of dollars for and posted on Facebook and Instagram.

At least six ads containing the typo on a graphic were posted to Trump’s official pages on Thursday and Friday, according to Facebook’s ad library.

The captions of the ads also falsely proclaimed Trump had “achieved PEACE in the MIDDLE EAST!”

All of the ads are now listed as “inactive.” 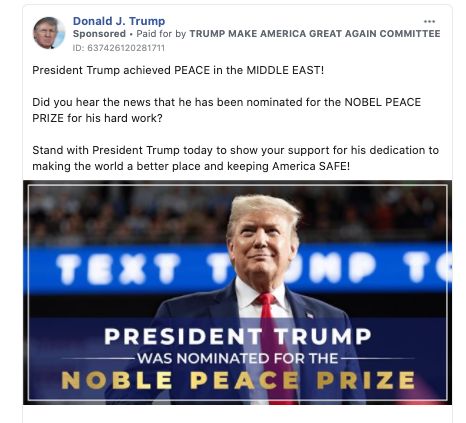 Trump himself in April misspelled the word in a Twitter rant about the media. He deleted the post and later claimed he was being sarcastic.

Far-right Norwegian lawmaker Christian Tybring-Gjedde, known for his Islamophobic and anti-immigration views, nominated Trump for the 2021 prize for his work on diplomatic ties between the United Arab Emirates and Israel.

Inevitably, the ads went viral for the wrong reasons:

And even caught the attention of “The Tonight Show” host Jimmy Fallon: