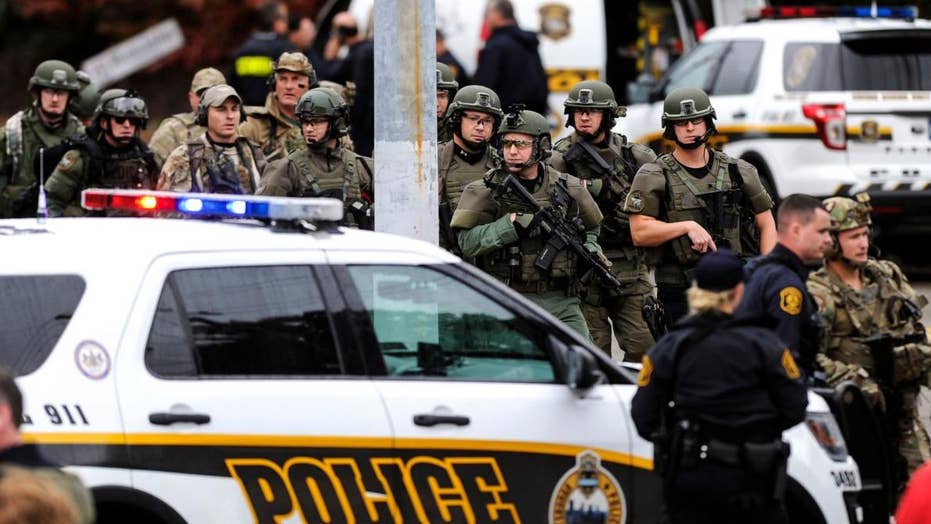 Pittsburgh synagogue shooting: What to know

A gunman opened fire in a Pittsburgh synagogue, killing multiple people. Here’s what you need to know about the tragedy.

President Trump said that the suspect responsible for killing and injuring multiple people and police officers at a Pittsburgh synagogue Saturday “should get the death penalty,” saying the suspect should “pay the ultimate price.”

Speaking to reporters ahead of boarding Air Force One, Trump addressed the “devastating” shooting that occurred Saturday morning at Tree of Life Synagogue in Pittsburgh’s Squirrel Hill neighborhood, which is predominantly Jewish.

Multiple fatalities were reported, and there were also injuries, including four police officers.

Earlier this month, the president called for the death penalty to be brought against “criminals” who kill police officers. The president has issued calls for a stricter death penalty policy since the 2016 presidential campaign.

Trump was asked about tighter gun laws, which he discounted, saying they had “little to do with it.”

He added: "If there was an armed guard inside the temple they would have been able to stop him."

"Maybe there would have been nobody killed except for him, frankly," Trump continued. "Isn't it a shame that you have to think of that inside a temple or inside a church? But certainly, the result would have been far better."

The president's comments were among the multitude of reactions from leaders on Saturday, as the story continued to develop. Those reactions ranged from solemn expressions of sympathy to angry denunciations of divisive rhetoric and urgent calls for action.

House Democratic Whip Steny Hoyer, D-Md., said he was "horrified" by the shooting, but criticized the president's suggestion to have armed guards in houses of worship.

“The President’s suggestion that Americans need to worship under armed guard is absurd," Hoyer said in a statement. "We must address the ease by which someone can obtain the most dangerous weapons of war and use them to commit mass violence in this country.” 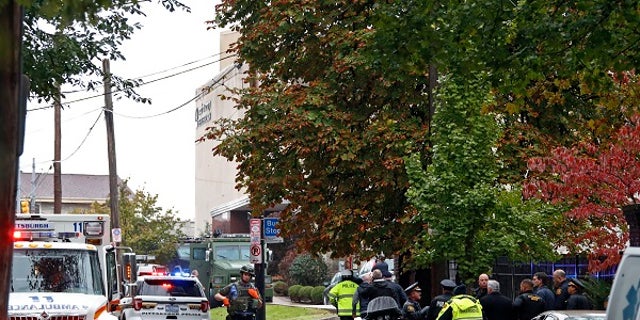 First responders were seen near the Tree of Life Synagogue in Pittsburgh, Pa., where a shooter opened fire Saturday, Oct. 27, 2018.
(AP)

The president added that “the world is a violent world.”

“You think when you’re over it, it just goes away,” Trump said. “But then it comes back in the form of a madman—a whacko.”

Trump added that prior to taking office he “watched instances like this,” calling it a “shame.”

“But it’s even tougher when you’re the president of the United States,” Trump said. “You have to watch this kind of a thing happen, and it’s so sad to see.”

Trump tweeted earlier Saturday morning, saying the events in Pittsburgh were "far more devastating than originally thought," adding that he "spoke with Mayor and Governor to inform them that the Federal Government has been, and will be, with them all the way."

The president's daughter, Ivanka Trump, who converted to the Orthodox Jewish faith with her husband Jared Kushner, condemned the events.

"America is stronger than the acts of a depraved bigot and anti-semite. All good Americans stand with the Jewish people to oppose acts of terror & share the horror, disgust & outrage over the massacre in Pittsburgh. We must unite against hatred & evil. God bless those affected," Ivanka Trump tweeted.

Vice President Pence also tweeted, "praying for the fallen," while counselor to the president, Kellyanne Conway, called the event "horrifying."

White House Press Secretary Sarah Sanders also reacted, saying she is "Saddened and appalled by the cowardly act of evil committed at Tree of Life Synagogue in Pittsburgh. We stand in total solidarity with the victims and all of the Jewish community against bigotry and hate."

"My heart breaks over the news out of #Pittsburgh. The violence needs to stop. May God bless, guide & unite the United States of America."

Also issuing a strongly worded condemnation of the shooting Saturday afternoon was House Speaker Paul Ryan, R-Wisc., who, like so many others, voiced disgust and dismay over the bloodshed and racist overtones.

"This morning, a solemn celebration of life and faith turned to horror and chaos. We are deeply devastated by this tragedy, the roots of which appear to be especially repulsive," Ryan said in his statement. "The sickening reality is that anti-Semitism in America continues to rear its ugly head. It is an ideology of hate that must be eradicated wherever it may surface. This is a time to mourn and heal, but also to reaffirm that we will not tolerate this bigotry."

Others, like Democratic Connecticut Sen. Chris Murphy, chided politicians for feeding divisions in society with their rhetoric.

"We cannot continue down this path — something must change,” his statement read. “Certainly, our loose gun laws are to blame, but we are also dealing with a much more insidious problem. Access to online cesspools of racial and religious hatred comes too easily today, and too often, political leaders are trading in the kind divisive rhetoric that caused people to fear those that look, or worship differently than them, and then act on those fears.”