Home » Politics » Trump backers called Pence a 'traitor' during CPAC, mocked the ex-VP for skipping the confab, and gave him just 1% in a poll of potential 2024 GOP presidential contenders

ORLANDO, Florida — Mike Pence was pretty much an afterthought at CPAC 2021.

The former vice president didn’t come to the central Florida event. His name barely registered a mention over three-plus days here, save a cameo video appearance on a TV displayed in a far-off corner of the conference.

Donald Trump’s most faithful supporters mocked the ex-president’s two-time running mate right in front of reporters. And in a straw poll of potential Republican candidates interested in a 2024 run Pence’s name sat sandwiched among a pack of 1 percenters that included Tucker Carlson, Rand Paul and Tim Scott.

It was a complete 180 for the longtime conservative champion who spent the last two decades wowing audiences at the annual confab known as the Super Bowl of the right. It also demonstrated just how little room there is now for aspiring Republicans who don’t have Trump’s last name while the party contemplates its near-term future in the political wilderness while Democrats hold the White House and both chambers of Congress.

Pence declined an invitation to speak at CPAC this year, and an advisor to the ex-vice president would only say that Pence was keeping a “low profile” since leaving the White House. That left Trump and his supporters to hold court over the roughly 1,400 attendees who packed two floors of the expansive Hyatt hotel during a global pandemic while disparaging Pence over being a no-show.

“That’s not the response of a future leader of the Republican Party, to say, ‘Oh well, I guess I’m not coming,'” said Matthew Braynard, a data and digital strategist who worked on Trump’s 2016 presidential campaign and more recently with Rudy Giuliani in a quixotic bid to overturn the results of the 2020 election.

Others served up their own versions of harsh anti-Pence rhetoric, much of it tied to their incorrect belief that Trump’s No. 2 failed to use his powers presiding over the Congressional certification of Joe Biden’s White House victory to declare Trump the real winner.

Just as this reporter prepared to interview Indianapolis radio talk show host Tony Katz about Pence’s future last weekend, a CPAC attendee chimed in by calling the ex-vice president a “traitor.” This person said Pence wasn’t welcome at the conference.

Braynard, who was responsible for displaying a golden Trump statue at CPAC that quickly went viral, said he too questioned Pence’s political viability. If the former VP had such a strong following, he said Pence should have considered renting a hotel across the street and attempted his own counter-programming.

Roger Stone, the longtime Trump confidant whotried without success to crash CPAC this year, said in an interview that Pence missed an opportunity by staying away from the conference.

“If I were Mike Pence, I would have come to CPAC because he has a huge amount of damage to repair,” Stone said.

But Stone also said that Pence wouldn’t exactly be doing much for his own cause — should that cause be a future White House bid — had he decided to go to Orlando.

“If Mike Pence should decide to run for president in 2024, he will not be the nominee of the Republican Party because he is viewed, rightly or wrongly, by many people in the movement as a traitor,” he said.

Pence and his team have largely stayed out of the spotlight since Trump effectively made him a pariah for his role in ceremoniously signing off on the 2020 election results in President Joe Biden’s favor.

On January 6, pro-Trump rioters stormed the Capitol chanting “Hang Mike Pence.” Trump egged them on tweeting that Pence “didn’t have the courage to do what should’ve been done.”

In his exit from the White House, Pence attended Biden’s inauguration, skipped Trump’s departure from Joint Base Andrews and notably stopped tweeting photos of himself with Trump. Republican sources told Insider in January that they thought Pence was laying low out of concern for his own safety.

Pence did surface to take a new job as a distinguished visiting fellow at the conservative Heritage Foundation. And on Wednesday Pence published an opinion piece calling for tighter limits on voting.

“The tragic events of Jan. 6 — the most significant being the loss of life and violence at our nation’s Capitol — also deprived the American people of a substantive discussion in Congress about election integrity in America,”  he wrote in the Heritage Foundation’s “Daily Signal.”

Like clockwork, Bloomberg News reported a few hours after Pence’s piece posted that Trump advisors were urging the former president not to include Pence as his running mate should there even be a 2024 campaign.

Not that Pence and his team were thinking they’d be back together again anyway. The former VP has been eyeing his own run for the White House, not serving again as Trump’s running mate. 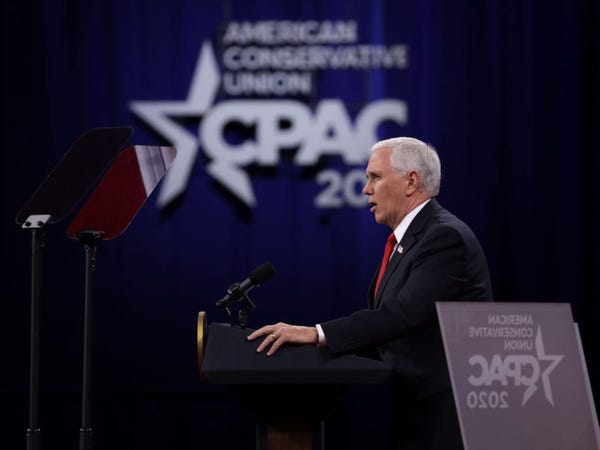 Behind the scenes, Pence’s team of loyal advisors and staffers, have been debating how and when to return to the spotlight (and whether they should even run for president in 2024), according to Indiana Republicans and others close to the tight-knit operation.

“He’s been focused on his family and his immediate post-office priorities, two of which are the Heritage and Young America’s Foundation partnerships,” a Pence advisor emailed Insider Wednesday.

The advisor also said that Pence would be campaigning soon for Republicans running for the House, Senate and governorships across the country in 2022.

The last time Pence lost a race, way back in 1990, he went underground for almost a decade. At the age of 61, it’s unlikely that Pence could vanish from the scene and remain relevant. But staying out of the spotlight for some time wouldn’t hurt, veteran Republicans at CPAC said.

“I think he’s being very smart by just laying low for a while. I think all the wounds are very open. Let’s let things settle down a little bit,” said Saul Anuzis, a former Michigan Republican Party chairman.

“He’s a very disciplined and smart politician. He’s been around for a long time. He knows his game as well as anybody else. So I think he’s letting it play itself out. Everybody asks, ‘So when’s this Trump thing going to be over?’ Time will tell.”

Jenny Beth Martin, a veteran tea party leader, said in an interview at CPAC that Pence does have a good argument to make with voters on the right. It’s the same one he’s made many times over..

Of Pence’s political prospects, Martin added a note of caution about writing him off. “I think there are a lot of things that can happen in 3 1/2 years. And we just need to give everyone who might be in that arena the space to figure out what they’re going to do,” she said.

Katz said he dismissed the MAGA acolytes who claim Pence is to blame for Trump now being an ex-president.

“I think that’s mythology at best, because to say he is a traitor, ‘Oh, he didn’t reject the electors. He didn’t send them back to the States recertification.’ He didn’t have an option to do that,” he said.

But the Indiana radio host also said he sees other job opportunities in the federal government for Pence when and if Republicans win back the White House. He’s dubious, though, that Pence can ever win the biggest job of all.