Former acting Director of National Intelligence Ric Grenell said it is imperative that the United States communicate with the Taliban, but warned that they need to be hearing “a very tough message,” and he slammed President Biden for having “ignored the conditions” set by former President Donald Trump in his 2020 agreement with the extremist group.

Grenell, the former ambassador to Germany who served as the acting director of national intelligence under the Trump administration from February 2020 until May 2020, told Fox News that the Biden administration “dismissed the value of monitoring the situation in real time.”

“Just typical bureaucrats who were implementing their myopic view of how to withdraw, and they failed to take into account the reality on the ground,” Grenell said.

He added: “The team that gave us Libya and Syria are now delivering Afghanistan policy. It is a recipe for disaster.”

Reacting to the current security crisis in Afghanistan, Grenell told Fox News that the U.S. is “well past the conversation of whether or not we should be in Afghanistan.”

“The majority of people from both parties feel it was time to go after 20 years – that’s a red herring when President Biden talks about him wanting to leave – well, of course, everybody wanted to leave,” Grenell said. “The problem is how he left, and not monitoring the situation in real time. That’s the problem.”

Biden administration officials this week have said U.S. commanders on the ground in Kabul are in talks with the Taliban – something Grenell told Fox News is necessary.

“You have to be talking to the Taliban, but they have to be hearing a very tough message, and understanding you’re serious about the conditions,” Grenell said. 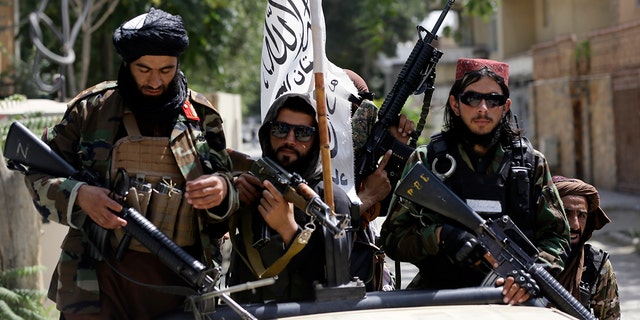 Taliban fighters display their flag on patrol in Kabul, Afghanistan, Thursday, Aug. 19, 2021. The Taliban celebrated Afghanistan’s Independence Day on Thursday by declaring they beat the United States, but challenges to their rule ranging from running a country severely short on cash and bureaucrats to potentially facing an armed opposition began to emerge.
(AP Photo/Rahmat Gul)

“Donald Trump had conditions that needed to be met, and the Taliban knew that,” he continued, reflecting on the Trump administration’s strategy with regard to withdrawing troops from Afghanistan.

“We knew the goal was to leave Afghanistan, and so the U.S. government was preparing to do so by drawing down all of our assets,” Grenell told Fox News. “At the same time, it was highly coordinated between the State Department and the Pentagon to ensure that during negotiations, the conditions were met for our withdrawal.”

Grenell told Fox News that there was a “real-time monitoring of the situation and a constant adjusting according to what was happening on the ground.”

“We knew the goal, but we monitored, in real time, the unfolding situation, to update the implementation of the strategy in order to meet our goal,” he said.

Grenell told Fox News that one of the conditions that was part of Trump’s 2020 agreement to withdraw U.S. troops from Afghanistan was that the Taliban agreed they would “not make a move to reconstitute.”

“We made it clear to the government of Afghanistan and to the Taliban that if they did, they would face immediate and overwhelming U.S. force,” Grenell said. “The reality is, while you can certainly get better information by having American boots and intelligence officials on the ground in Afghanistan, we knew we could adjust.”

Grenell went on to tell Fox News that the Trump administration was planning to “utilize technology.”