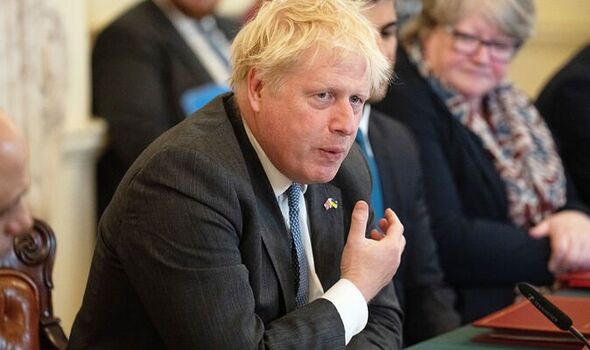 With inflation set to hit double figures by the end of the year, recipients will see their payments rise by more than 10 percent in 2023.

Under the triple lock, pensions increase each year by the highest out of average earnings, inflation or 2.5 percent.

There had been growing fears the triple lock mechanism could be postponed for a second time in a row after the Government urged restraint to be shown by employers when it comes to pay rises.

The Bank of England and economists have warned that increases in pay in line with inflation risk further pushing up the increase in prices.

Mr Johnson told the Cabinet on pay this morning: “It is right that we reward our hard-working public sector workers with a pay rise, but this needs to be proportionate and balanced.

“Sustained higher levels of inflation would have a far bigger impact on people’s pay packets in the long run, destroying savings and extending the difficulties we’re facing for longer.”

Despite the remarks, No10 has eased concerns pensioners will be impacted by the drive to curb increases.

The Prime Minister’s official spokesman said: “The view is that if we were to chase inflation in this way, by matching all demands on public sector pay, some of which would involve matching inflation and adding additional on top of that, that would be inflationary, and that’s what in the long term would actually make people feel like they had less money going forward.”

Asked about whether raising pensions in line with inflation would be inflationary, he said: “The Chancellor needs to consider it all in the round and the view is that we can meet that commitment without stoking those inflationary pressures.

“But we did take difficult decisions with regards to the triple lock, a temporary one-year suspension.”