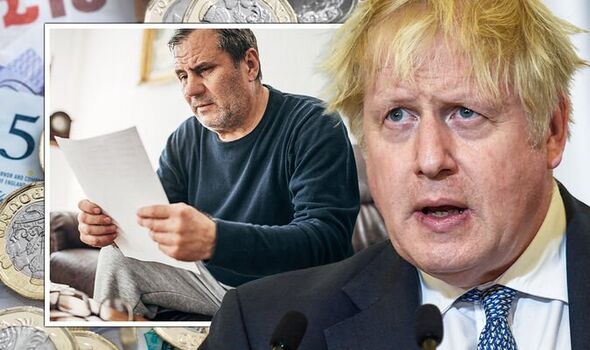 More than half of people (55 percent) support scrapping the tax rise while just 17 percent oppose axing it.

Senior Conservatives have urged ministers and Treasury officials to listen to the public and abandon plans for the increase. There is worry that the party’s reputation for economic competence is in jeopardy and it risks punishment at the polls.

The rising cost of living is the source of greatest concern for adults in Great Britain (54 percent), according to the research by Redfield & Wilton Strategies.

It is a much greater source of anxiety than the pandemic (14 percent), the potential Russian invasion of Ukraine (14 percent) or climate change (11 percent).

Alleged rule-breaking parties at Downing St during the pandemic is the top concern for a mere four percent of respondents.

Former Brexit secretary David Davis, who has pressed for the Government to stage a u-turn and cancel the planned increase, said the polling showed “the harsh truth is the public are wiser than the officials at the Treasury”.

“All of these you would think are critical variables for the economy generally and [ones] the Treasury appears to be ignoring – and ignoring at a time when it actually doesn’t need the money.”

Mr Davis fears the Government is in danger of suffering electoral damage comparable to the aftermath of 1992’s Black Wednesday.

Warning there is a “great risk in this for the Conservative party,” he said: “[People] vote Conservative because they think we are going to keep the taxes down and make the economy work. At the moment, I think people expect us to put taxes up more than anybody else so that’s a very bad reputation for a Tory party to have; the last time we had that reputation we lost over 100 seats.”

Last month the Chancellor and the Prime Minister insisted the increase in National Insurance, which is expected to raise £12billion, “must go ahead”. All employees, employers and the self-employed will pay 1.25p in the pound for a year; the additional tax will then be collected through a “health and social care levy”.

Former Conservative leader Sir Iain Duncan Smith urged ministers to focus on the top concerns of citizens, telling the Sunday Express: “They need to listen to what the public is really concerned about, given the terrible increase in cost of living, mostly driven by the energy price spike.”

He said: “That would be a mistake. That would be throwing the burden of that onto the shoulders of people who can’t really afford to pay it.”

The former work and pensions secretary also pressed for an end to “VAT on energy products full stop” and he wants green levies axed.

The Prime Minister is being told that people are caring less about so-called partygate but it is “essential” that taxes are slashed or the Tories will be “punished” at the ballot box.

A senior Conservative insider said: “The data is clear. Voters want to see the PM leading on their priorities.

“People are caring less and less about parties and more about the cost of living. A commitment has been made that, by the next election, taxes will be slashed. This is essential.”

Pressing for MPs to put pressure on No 10 and the Treasury, the insider said: “A Conservative party which oversees this level of debt and high taxation will be punished – MPs know this, and now is the time for them to apply pressure into keeping the PM and the Treasury honest.

“Significant power lies in the backbenches. They must use this to ensure conservative values are heard and acted upon.

“If we do not act fast, the positives we see will be for nothing. Party members are seeing the migration issue dealt with head on, the Government is leading on the Ukraine crisis, and our economy is well primed for a strong recovery.

“The party must ask one fundamental question: what kind of nation do we want? A high tax, debt ridden one? Or a freer, more dynamic Britain?”

Labour says it supports greater funding for health and social care but opposes increasing National Insurance contributions because of the impact on working people and businesses.

Shadow Chancellor Rachel Reeves said: “We’re all noticing how much prices are going up – whether that’s school shoes for our kids, the ingredients for our Sunday roast, or when we get our energy bills. The Government needs to get a grip on this crisis made in Downing Street.

“Instead all they’ve done is hike taxes at the worst people time and given people a dodgy buy now, pay later scheme for their energy bills.”

John Longworth, a former director general of the British Chambers of Commerce who today chairs the Independent Business Network, wants the National Insurance increase cancelled and urged the Government to go for high growth policies.

He said: “The government need to get real if they want to be re elected: change course on net zero, cut VAT on fuel.”

John O’Connell, chief executive of the TaxPayers’ Alliance, also called for the planned rise in National Insurance to be abandoned.

He said: “Hard-working households and struggling firms know that things are only likely to get worse over coming months, and cannot be asked to endure any further crippling tax hikes. Planned rises, like the national insurance hikes, must be scrapped if ministers want to show they still care about cutting the cost of living for ordinary taxpayers.”

Former defence minister Mark Francois acknowledged Tory doubts about the imminent increase in National Insurance, saying: “There might be less scepticism on the backbenches if colleagues were more confident that the tax increase would be spent effectively. If the NHS is not reformed we will simply be facing this scenario again and again in future years.”

Rebecca McDonald of the Joseph Rowntree Foundation, urged the Government to strengthen benefits amid fears that inflation will hit seven percent in April.

She said: “At the same time inflation hits this 30 year high, out of work support is at a real-term 30 year low and come April all benefits will be uprated by only 3.1 percent, covering less than half of expected inflation. It’s not right that this disparity will leave families on the lowest incomes grappling with impossible choices – the Government must act urgently to strengthen our increasingly inadequate social security system.”

Daniel Tomlinson of the Resolution Foundation argued that stopping the National Insurance rise would be an “ineffective” way of helping low-income families who have the most to lose from a hike in energy bills.

He said: “Instead, an expansion of the benefits system and the Warm Homes Discount, targeted at those who need it most, would be the most efficient way of tackling increased fuel poverty.”

Mr Tomlinson said that rising health costs and changes to the population over this decade could push up spending by up to £76billion a year but he cautioned that it “won’t be sustainable” to fund this by “repeating past patterns of tax rises falling disproportionately on pay packets via National Insurance”.

He said: “The Government’s priority going forwards should therefore be to tax income more efficiently and fairly, and to find new sources of tax revenue, with better taxation of wealth a priority.”

A Treasury spokesman defended the planned rise, saying: “The health and social care levy will benefit people across the country by tackling backlogs the pandemic has created on NHS operations and procedures, and will strengthen the adult social care system so that people don’t have to bear the financial risks of catastrophic care costs themselves. It is a progressive tax with those earning more paying more.

“We’re providing around £21billion this financial year and next to help families with the cost of living, including cutting the Universal Credit taper rate to make sure work pays, freezing alcohol and fuel duties to keep costs down, and helping households with their energy bills through our £9.1billion energy bills rebate.”

The Prime Minister may take some comfort from the poll finding showing that fewer than one in 20 people (four percent) said the alleged lockdown-era parties in Downing St were their top concern. Mr Johnson will return to the Commons this week after the mid-term recess with a police probe into the gatherings in Whitehall still underway.

A supporter of Mr Johnson argued there is a clear distinction between being present in a party location and talking about work and actively partying.

He said: “It’s really important that the Government focuses on what matters to voters – the cost of living, levelling up and delivering the benefits of Brexit, as well as the fierce battle being fought against woke warriors to celebrate Britain’s past and shape it’s future.”