Home » Politics » ‘This has been a tough week’: Black lawmakers discuss racial inequities, COVID with Biden

‘This has been a tough week’: Black lawmakers discuss racial inequities, COVID with Biden

Leaders of the Congressional Black Caucus met with President Joe Biden and Vice President Kamala Harris at the White House for the first time Tuesday and laid out their policy vision.

“We had an amazing meeting where we were able to share our thoughts and ideas, but we also came because we know there will be challenges,” said Rep. Joyce Beatty, D-Ohio, chair of the Congressional Black Caucus. The meeting “was the first of many to come” between the White House and the group, she noted.

“This has been a tough week for us,” Beatty added, referencing the death of Rep. Alcee Hastings, a CBC member who represented a majority-Black congressional district in South Florida, and the tribute to U.S. Capitol Police Officer William “Billy” Evans, who laid in honor at the Capitol Rotunda Tuesday. 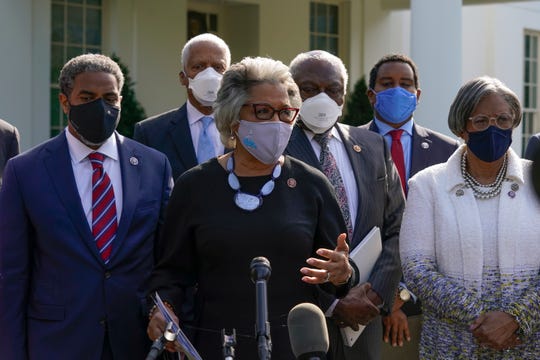 “And yet we also know that another unarmed Black man was shot and killed. Too many senseless deaths,” Beatty said, referencing the Sunday police shooting of 20-year-old Daunte Wright in a Minneapolis suburb.

The congresswoman noted the CBC discussed police brutality with Biden and Harris during their meeting.

The coronavirus pandemic was a major topic of discussion, with vaccine access a prime concern of the caucus, she said.

When asked about vaccine skepticism in the Black community, Beatty said vaccine hesitancy is not the top issue.

“It is having access to it, it is needing more education and awareness, it is transportation,” Beatty said, noting that the Democrats’ $1.9 trillion COVID relief package included provisions funding vaccine distribution to underserved minority communities.

The lawmakers announced a CBC pro-vaccine campaign for the Black community akin to voter turnout efforts would launch in the coming weeks. The caucus also will partner with the NAACP and the Urban League to address vaccine hesitancy and education.

“With the vaccine, you are seeing hesitancy, but you are also seeing a lack of education and distribution,” said Rep. Brenda Lawrence, D-Mich. “We are trying to use all of our bully platforms … to let our community know that to live and fight this virus, we need all of you to come and get it.”

“We must do this to keep our community strong and alive,” she said. 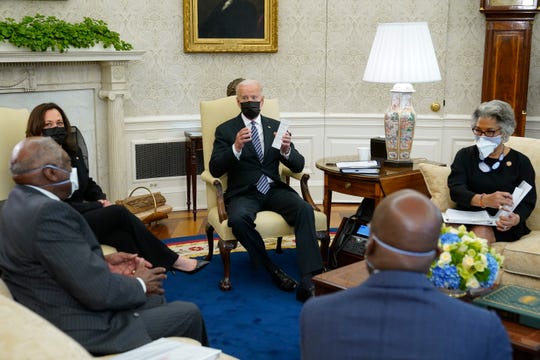 The caucus is also focused on Biden’s upcoming infrastructure and jobs legislation and on learning from past federal investment programs.

“We know the lessons of history,” said Rep. James Clyburn, D-S.C. “We want to make sure that this time around, we do not repeat the recovery errors that were made.”

Prior to the group’s meeting with Biden, the president discussed Wright’s death and the need to enact reforms to American policing.

“And also, you know, with Daunte Wright in Minnesota — that God-awful shooting resulting in his death, and — and in the midst of an ongoing trial over the killing of George Floyd. And Lord only knows what’s happened based on what the verdict will or will not be there,” Biden said.

The president noted that the group had “an awful lot of things we have to deal with … when it comes to police, when it comes to advancing equality, economic opportunity,” but that the point of the meeting was to “deliver some real change.”

Biden also said, however, that criminal justice is was not the only policy area of concern, arguing that addressing economic inequities would better serve Black Americans in the long term.