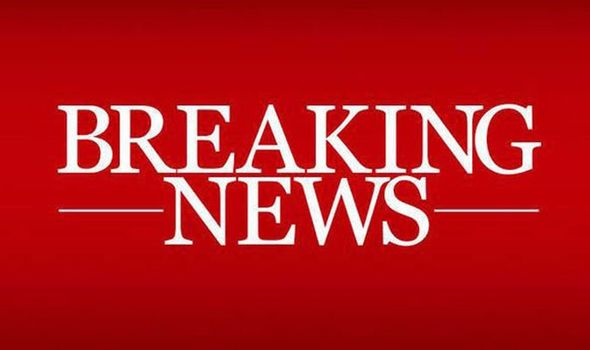 And one political analyst has said Mrs May “would meet with Lucifer” if it helped her settled Brexit.

The Prime Minister’s spokesman has confirmed the meeting will take place, although the time and venue are still to be confirmed.

Yesterday, Mrs Sturgeon said Prime Minister Theresa May’s offer to ask for a Brexit extension “as short as possible” was a potential trap.

Sturgeon said if MPs agree to the extension and not to fight European parliament elections then they will face the choice between the prime minister’s divorce deal or leaving the EU without a deal.

She tweeted: “Parliament needs to be very wary about a potential trap.

“The sensible way forward – and I think the one PM would take if this was a serious attempt to build consensus – is agree to fight election, seek longer delay and allow option of public vote on what Commons agrees.”

She added: “This does seem very much like PM kicking the can and, yet again, delaying making any decision that could break her Cabinet.”

“What is missing is an answer from her to the question that many MPs faced up to last night – what is the compromise she is willing to make?” 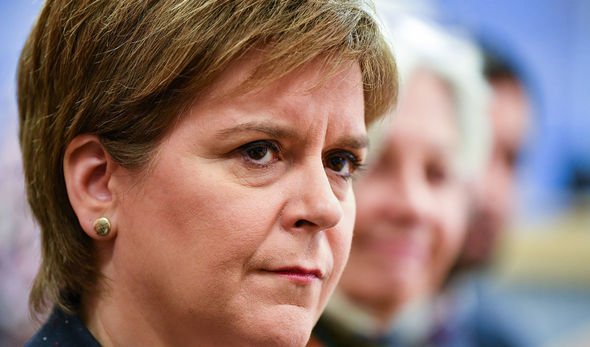 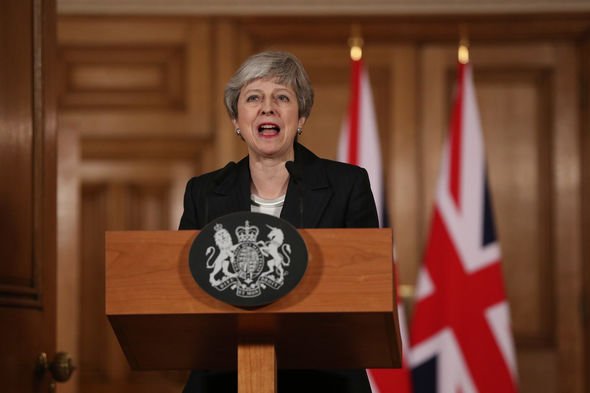 The Open University’s Dr Richard Heffernan said of Mrs May: “She would meet with Lucifer if it would help her settle, in any way, the problem she considers Brexit to be.

“She’s no longer prime minister. She’s taken Letwin’s job of facilitating no Brexit. It only remains to be seen if Tory MPs stop her.

“Hard remainers, opposed to any form of Brexit, soft or otherwise, may be the only people to prevent the referendum being overturned.”

Mrs Sturgeon also become embroiled in a spat with Scottish Secretary David Mundell over his attitude towards leaving the EU without a withdrawal agreement in place after she tweeted following suggestions Mr Mundell was “indecided” about whether to ask for an extension to Article 50.

She tweeted: “If this is true, it would suggest that on the question of whether we should crash out of the EU with no deal or seek an extension, the Secretary of State for Scotland was undecided. Extraordinary.”

Mr Mundell responded: “Disappointed @NicolaSturgeon that rather than rely on Twitter you didn’t just ask me.I made my position clear at Cabinet as I have done publicly that I am absolutely opposed to leaving EU on 12 April without a deal. Not so sure you are, since it would deliver the chaos @snp crave”.

Mrs Sturgeon replied: “Only fair that I tweet Sec of State response. I hope he will back participating in Euro elections so that we avoid a May 22 cliff edge. Would also point out that voting for @joannaccherry motion last night would have given insurance policy against no deal.” 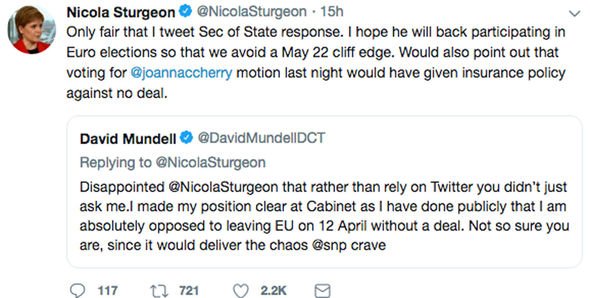 Mrs Sturgeon has also put forward proposals to cancel Holyrood’s upcoming recess in case MSPs have to respond to a no-deal Brexit.

Ms Sturgeon and her senior ministerial team met after MPs at Westminster again failed to find a way forward in the Brexit process on Monday, with her spokesman saying “the priority is not recess, the priority is dealing with Brexit”.

He added: “The First Minister’s view, endorsed by Cabinet, is if we are in the same position this time next week as we are at the moment – i.e. facing going over the cliff of a no-deal – then the FM’s view is it would unacceptable for the Scottish Parliament to be in recess.”

The Scottish Government’s Parliamentary business minister, Graeme Dey, will raise the issue with the parliamentary bureau – which considers business at Holyrood – with a decision likely later on Tuesday. 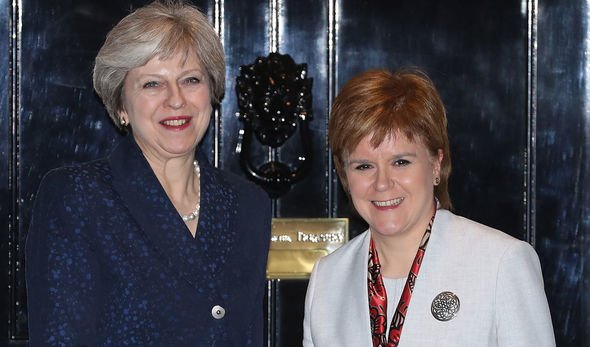 Mrs May’s decision to invite Mrs Sturgeon for talks is understandable, given the SNP’s 35 MPs could make a crucial difference in any future Brexit vote.

The Prime Minister is also expected to meet Labour leader Jeremy Corbyn for talks in an attempt to “break the logjam” over Brexit, prompting fury among Eurosceptic Tories.

Speaking yesterday after a seven-hour cabinet meeting, Mrs May said she would seek an extension beyond next week to allow negotiations with Mr Corbyn aimed at ensuring the UK leaves the European Union “in a timely and orderly way”.

Mr Corbyn said he would be “very happy” to meet the Prime Minister in a bid to offer “certainty and security” to the British people, but Tory Brexiteers reacted with anger.

Jacob Rees-Mogg described the offer as “deeply unsatisfactory” and accused Mrs May of planning to collaborate with “a known Marxist”.

The Prime Minister has failed to gather enough support to get her Brexit deal through Parliament, with MPs having voted it down three times.

On the most recent occasion last week, MPs were asked only to vote on the Prime Minister’s Withdrawal Agreement after Commons Speaker John Bercow told her the same motion must not be asked repeatedly without any changes being made.

A series of indicative votes, held after MPs decided to take control of the Brexit process, have also so far failed to find consensus after none of the proposals gained enough support to pass.