The Imperious Rise and Accelerating Fall of Andrew Cuomo

Last spring, when the coronavirus outbreak was surging in New York, Gov. Andrew M. Cuomo’s daily briefings became appointment television for many, as he authoritatively ticked through the latest statistics on infections, hospital beds and deaths.

Behind the scenes, Mr. Cuomo was often obsessed with another set of numbers: his ratings. He would sometimes quiz aides as soon as he ended a broadcast about which networks carried him live and exactly when they cut away — data they were expected to have at their fingertips.

For an image-obsessed politician who has long devoured almost everything written about him, it was an intoxicating amount of attention as Mr. Cuomo transformed almost overnight into a national leader of the Democratic Party and a foil for President Donald J. Trump. “To the 59 million viewers who shared in these daily briefings,” Mr. Cuomo said on his 111th and final daily update, “thank you.”

That June day Mr. Cuomo gathered his team in the backyard of the governor’s mansion in Albany for a mostly mask-less celebration — an aide said attendees took Covid tests — toasting their accomplishments with beer and wine. For some allies of Mr. Cuomo, that period was the apex of an Icarus-like arc for a leader convinced of his own hype and indestructibility. 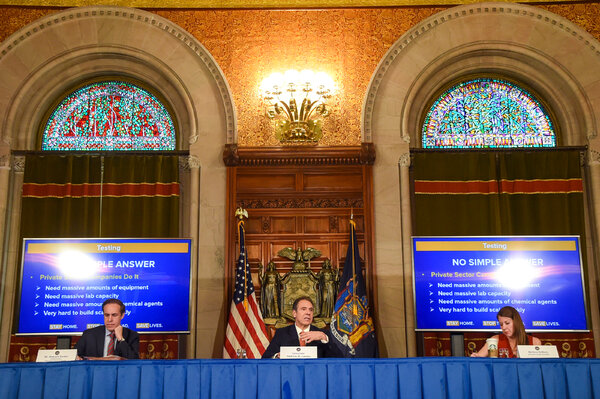 Less than a year later, Mr. Cuomo’s governorship is imperiled, as he faces allegations of groping, sexual harassment and inappropriate behavior made by six women; an independent investigation into those accusations; an impeachment inquiry by state legislators; a federal investigation into his handling of nursing homes during the pandemic; and collapsing support from leaders in his own party.

Yet for all of that, Mr. Cuomo is now furiously plotting a path to salvage his job, his legacy and even a potential fourth-term re-election run in 2022, according to Democrats familiar with his thinking. In defiant remarks on Friday, Mr. Cuomo accused Democratic leaders of “playing politics” by calling for him to resign and demanded they wait for the “facts” as he impugned the motives of the women who have come forward.

“A lot of people allege a lot of things for a lot of reasons,” Mr. Cuomo said, denying he ever sexually harassed anyone.

​Be it his self-regard, his disdain for fellow Democrats or his imperious demeanor, Mr. Cuomo alienated allies and enemies alike on his way up in politics, and now finds himself sliding from hero-level worship to pariah-like status with the kind of astonishing speed that only the friendless suffer. It is a downfall foretold in a decade-long reign of ruthlessness and governance by brute force, according to interviews with more than two dozen lawmakers, elected officials, current and past Cuomo administration officials, political activists and strategists in the state.

For Mr. Cuomo, politics has always been a zero-sum game: For him to win, someone else must lose, whether it is the legislator whose idea he is taking credit for, or Mayor Bill de Blasio, whose initiatives he routinely stomped. The same domineering approach that won plaudits in the depths of the coronavirus crisis has bruised a generation of Mr. Cuomo’s peers, such that many were ready to turn on him once vulnerable.

“The problem with Cuomo is no one has ever liked him,” said Richard Ravitch, a former Democratic lieutenant governor. “He’s not a nice person and he doesn’t have any real friends. If you don’t have a base of support and you get into trouble, you’re dead meat.”

New York’s two Democratic senators, Chuck Schumer and Kirsten Gillibrand, have now abandoned him, along with most of the state’s congressional delegation. A majority of the State Legislature, whose members he has long treated dismissively, have called on him to resign, including more than 40 percent of his fellow Democrats.

As one Cuomo adviser put it, the governor has burned so many bridges that he has left himself with virtually no path forward. Yet those who have been close to Mr. Cuomo say they cannot imagine him resigning, not least because it would leave him short of matching the three full terms of his father, Gov. Mario M. Cuomo, let alone topping him with a fourth by running in 2022.

The elder Mr. Cuomo, who died in 2015, looms large in almost any discussion of the younger Mr. Cuomo’s ambitions to stay in the governorship. At Andrew’s third inaugural address, the one in which he equaled his father, he wore a pair of Mario’s shoes, according to a person familiar with his wardrobe.

Even in his current diminished state, Mr. Cuomo maintains some formidable political strengths, including a nearly $17 million war chest. His top government aides have been tweeting about his polling numbers and Mr. Cuomo believes the impression he made in those virus briefings will outlast any short-term damage, according to people familiar with his thinking. “New Yorkers know me,” as Mr. Cuomo said on Friday.

And if there is a modern playbook for surviving scandal, it begins with one clear rule: Don’t quit.

Mr. Trump ignored calls to step down as the Republican nominee in 2016 after a tape emerged of him bragging about grabbing women’s private parts. Former Gov. Mark Sanford of South Carolina, a Republican, finished his term after lying about his adulterous “Appalachian Trail” trip. And Gov. Ralph Northam of Virginia, a Democrat, survived widespread resignation calls over a photo that appeared to show him in blackface.

Mr. Cuomo’s advisers have been reaching out to labor and business leaders. And he has been maneuvering to consolidate and burnish support in the Black community, especially after the Legislature’s two top Democrats, both of whom are Black, have taken steps to push him out. His appearance last week flanked by Black clergy leaders, ostensibly to promote vaccine efforts in New York City, struck many as an especially brazen example of constituency politics.

And he is demanding that the attorney general’s investigation proceed, clinging to a possible 2022 run as a bargaining chip to avert resignation or impeachment. His endgame is unclear. More than anything, Andrew Cuomo is now trying to buy himself time.

Holding tight to his identity

The governor’s mansion in Albany is steeped in history: It is the former home of Nelson Rockefeller, Theodore Roosevelt, Franklin Roosevelt and, of course, Mr. Cuomo’s father. And since Mr. Cuomo’s split with his longtime girlfriend, the television personality Sandra Lee, and her sale of their Westchester home, Mr. Cuomo has lived in the mansion full time.

The 63-year-old Democrat owns no other property. He rents no second apartment that anyone in his orbit seemed to be aware of.

Everything about Mr. Cuomo — his home, his legacy, his identity — is wrapped up in a governorship now under siege. On Friday he was seen striding the mansion’s grounds, draped in a blanket, his cellphone pressed to his ear.

Being governor, in other words, is his oxygen.

Last year, he produced a giant foam mountain to memorialize the state’s declining virus caseload, and proudly posed before it. He commissioned a self-referential poster, complete with a picture of Mr. Cuomo in a muscle car and images of his advisers (“Magnificent Melissa” for his top aide, Melissa DeRosa). And he cast aside caution to write a self-congratulatory book of “leadership lessons” that published mid-pandemic, winning himself a reported seven-figure advance.

“There’s been no one around the governor to save him from himself,” said Mitchell Moss, a professor of urban policy at New York University whom Mr. Cuomo appointed to a transit advisory council in 2017. “He may intimidate even the people who should be giving advice.”

Mr. Cuomo has always kept his own counsel and his inner circle has shrunk over the years as waves of advisers have tired of his unrelenting and mercurial demands. Among those still providing advice, beyond his senior government staff, are Steven M. Cohen and William Mulrow, two former top officials in the governor’s office; Jefrey Pollock, his pollster; Charlie King, a longtime ally; and Jay Jacobs, the state Democratic Party chairman.

His loyalists felt his wrath especially during the last year when he would lash out if other politicians, especially Mr. de Blasio, received credit for virus-battling successes or initiatives.

When Mr. de Blasio at one point made an announcement of a shipment of supplies, including ambulances, from the Federal Emergency Management Agency, Mr. Cuomo berated the regional F.E.M.A. administrator, Thomas Von Essen, in unusually blunt fashion for not delivering supplies through the state, according to a person familiar with the call. Mr. Von Essen declined to comment.

In another episode, Mr. Cuomo and Mr. de Blasio greeted the arriving U.S.N.S. Comfort, the military hospital ship, from separate piers. Mr. Cuomo pulled out of what had been planned as a potential joint appearance, according to people involved in the planning.

The governor scheduled his event an hour earlier than Mr. de Blasio’s — seemingly unwilling to share the spotlight.

A spokesman for Mr. Cuomo denied there had been a planned joint event with Mr. de Blasio, that he had berated Mr. Von Essen or lashed out at aides when Mr. de Blasio would receive credit for anti-virus initiatives.

Mr. Cuomo’s bullying — a long-known aspect of his style — has been cast by his allies as simply his way of getting things done. He has strong-armed legislators and anyone else who dared cross him in a decade-long run of productivity that included legalizing gay marriage, passing stronger gun control measures, raising the minimum wage and beginning numerous major infrastructure projects.

But those tactics are now being seen in a different light, helping create an office culture that could be toxic, particularly for young women.

Ever since Mr. Cuomo broke onto the political scene he has carved a reputation as a brash hard-charger. As executive director for his father’s transition team, after the 1982 victory in the governor’s race, the younger Mr. Cuomo kicked his feet up on a desk during an interview with The New York Times, lit a cigarette and declared, “I’ve become very popular lately.”

Norman Adler, a senior aide on that 1982 campaign, said the current stories of an abusive culture in the younger Mr. Cuomo’s office today rang familiar.