The Texas legislature began its second attempt to introduce new voting restrictions on Thursday, unveiling a pair of bills that could become some of the harshest election laws passed this year.

Both chambers of the legislature unveiled their bills on Thursday, House Bill 3 and Senate Bill 1, which would ban a spate of voting expansions made during the COVID-19 pandemic. The bills would bar 24-hour and drive-through voting, ban election officials from sending absentee ballots to those who hadn’t requested them, expand protections for partisan poll watchers and usher in new, harsher ID requirements for voting by mail.

The bills, however, do not include two contentious portions from their prior incarnations. One would have blocked voting on Sundays before 1 p.m., something critics called a veiled attempt to bar “souls to the polls” drives that are common in the Black community. There is also no provision that would make it easier to overturn the results of an election.

Gov. Greg Abbott (R) announced the special session last month following a dramatic walkout by Democrats to block the initial barrage of restrictive legislation. Earlier this year, Democrats departed the statehouse en masse at the 11th hour, leaving the legislature short of the 100-member quorum needed to pass any bills.

It was largely a symbolic move. 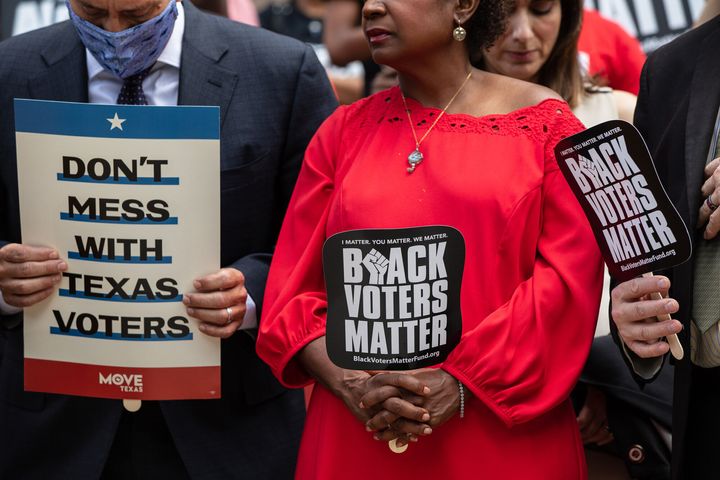 The governor, however, was furious and vowed to pursue the voting restrictions as well as other issues such as bail reform and anti-transgender legislation. As The Washington Post noted, Democrats have the power to walk out again, but chamber leaders — Republicans — can compel them to attend and can even lock the doors during a vote or get a court order to make the lawmakers reappear.

“The 87th Legislative Session was a monumental success for the people of Texas, but we have unfinished business to ensure that Texas remains the most exceptional state in America,” Abbott said in a statement on Wednesday, per CBS.

Floor votes on the bills could happen as early as next week.

The Republican Party’s push for new voting restrictions is built on the back of former President Donald Trump’s ongoing lies about the 2020 election, which he lost to Joe Biden by more than 7 million votes. Trump and his surrogates claim that widespread voter fraud cost him the race.

A bevy of court cases contesting that point failed and no evidence appeared to back up those claims. In fact, voter fraud is extremely rare and Trump’s own officials at the time said the 2020 race was the “most secure” in history.

Still, around the U.S. GOP lawmakers have passed or introduced a raft of legislation critics say unduly targets low-income Americans and communities of color, particularly in regions that traditionally vote Democrat. Republicans claim the bills are meant to ensure “election integrity.”

This week, the White House unveiled a massive effort to counter such legislation. Vice President Kamala Harris announced that the Democratic National Committee would spend an extra $25 million on voter turnout and registration.

“It is never too early to defend your rights,” she said.