Nicola Sturgeon arrived at Dunfermline Abbey only to be greeted by an echo of humiliating boos as she posed for media photographers close to the entrance. A crowd had gathered ahead of a visit from King Charles and Camilla, the Queen Consort in celebration of Dunfermline’s new status as Scotland’s eighth city. The event will be the first joint public engagement by the couple since the Queen’s funeral. The Scottish First Minister is due to meet with the new King and Queen Consort as they mark the city status of Dunfermline, a move personally approved by the late Queen Elizabeth II. 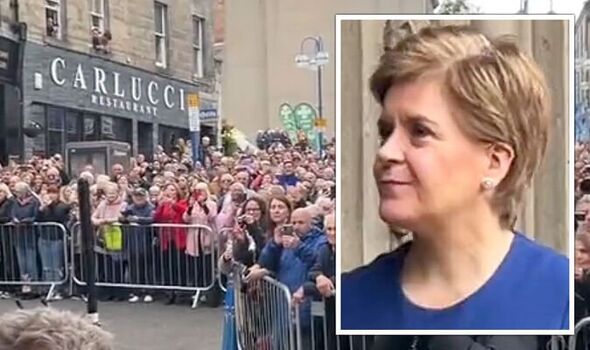 As Ms Sturgeon took to the steps of Dunfermline Abbey to greet local officials, her polite conversation was overshadowed by a storm of boos emanating from the crowd.

While a number of dull cheers could be heard among the gathered spectators, fiercely loud cries of opposition rang out above the song of nearby bagpipes.

Chris Ship, the royal editor for ITV News, reported from the scene: “If you needed a reminder of how divisive Scottish politics can be, Nicola Sturgeon was mostly booed, plus some cheers, by a crowd waiting for King Charles and Camilla to arrive.

“This is a crowd waiting for a monarch to turn up but took me by surprise.”