Home » Politics » Stand together to fight anti-Asian hate. We all have a stake in a more inclusive America.

Stand together to fight anti-Asian hate. We all have a stake in a more inclusive America.

The recent spate of violent anti-Asian hate crimes has shocked the country — and we must all speak up about it, no matter who we are, especially now.

One of us is a Black Muslim and the other a white Jew, and neither of us is Asian, but we are united with people of all communities who are opposed to anti-Asian violence and hate. It’s our belief that solidarity in the face of anti-Asian violence is both the moral thing to do, and the most effective way to ensure safety and respect for Americans who find their roots in Asia and the Pacific.

There are too many examples to recount, but among the notable offenses was the murder last month of an elderly Thai American man in San Francisco. He was assaulted from behind during his morning walk and killed. Shortly after, in Chinatown in neighboring Oakland, a 91-year-old Chinese American man was attacked from behind in broad daylight.An elderly Filipino American woman was punched in the face on a public trolley in San Diego.

From ‘Yellow Peril’ to ‘Chinese virus’

The list goes on. And then there are Tuesday night’s shootings in Atlanta. Even if this was not a hate crime intentionally targeting Asians, the shooter’s actions in singling out six women of Asian descent will reverberate deeply through a community that is already feeling vulnerable. All identity-based bias attacks don’t just injure the victims — they terrorize entire populations. That’s their intent.

We should not be surprised. It’s not just that anti-Asian rhetoric and policy has a long history in America — from the “Yellow Peril” and Chinese Exclusion Act of the 19th century to the internment of Japanese Americans of the 20th century. Anti-Asian violence is also the foreseeable product of the torrent of hate-talk that came from the former occupant of the White House, who notably described COVID-19 as “the China Flu” or “the Chinese Virus” and is still using that language.

Like clockwork, this hate spawned real-world consequences. California State University reported 122 hate crimes against members of the AAPI community in 16 of the country’s most populous cities in 2020, an increase of almost 150% over the previous year. Many of the culprits in these attacks literally invoked COVID-19 as they committed their crimes. 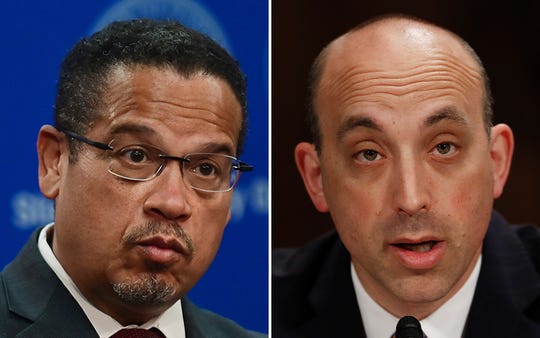 We both know what it’s like to be singled out and targeted for hate. Many held all Muslims collectively responsible after the terror attack on 9/11. The Trump administration’s Muslim Ban will be remembered as a black mark on our nation’s soul. The Jewish community has been the most frequently attacked faith group in the United States for years and, after the massacre at the Tree of Life synagogue in 2018, we saw a high mark of anti-Semitic incidents in 2019, including five murders and a deluge of vandalism.

What will bring down the violence and the hate against AAPI people? Changing the rhetoric at the top helps. President Joe Biden already has called out the surge of violence against AAPI people and the White House recently hosted a listening session with AAPI leaders. As a next step, we would welcome a presidential commission on ending ethnic and racial hatred, perhaps chaired by our first Asian and African American vice president. But by itself, it’s not enough.

Anti-Asian violence: Violence and hate against Asian Americans is a health and safety crisis for everyone

More tools for and action from law enforcement helps. Law enforcement agencies need better training and deeper connections with community about how to identify and respond to hate-based crime against AAPI people, including how to treat victims with dignity and respect. They also need to report all hate-based crimes to state and federal authorities. That might seem obvious, but far too many cities fail to report hate crimes or preposterously report “zero” hate crimes every year. And when bias-motivated crimes occur, they must be prosecuted. But by itself, it’s not enough.

Social-media platforms rooting out incitement and making hateful content hard to find helps. The attack on Jan. 6 revealed what many already knew: that it was far too easy for white supremacists, armed militia members, and conspiracy theorists to plan real violence in plain sight on social media. This is not a new problem. The complicity of the companies can no longer be ignored and they must enforce their own terms of service, let alone change their policies.

But by itself, it’s not enough.

The real key is grassroots, community-led, people-to-people responses. Neighbors, congregation members, and people from all walks of life must sit down, listen to each other, and build a truly inclusive society together from the ground up.

Along with that comes better education. We need explicitly anti-racist, anti-bias and anti-hate education programs in schools so bigotry can be beaten back before it takes root among the next generation.

We also must do the painstaking work of listening to people who hold anti-Asian and Pacific Islander and other racist views. Not to excuse it, but to transform it. We think of the powerful work that the Free Radicals Project and Life After Hate, organizations run by former white supremacists, are doing to reach out to, listen deeply to, and convert white supremacists one by one.

Alike, we are not: Asian Americans aren’t here for you to objectify, ridicule or kill in Atlanta shootings

In short, we need a top-to-bottom, whole-society approach where everyone takes a stand. From the president and CEO to you and me, whether online or in line at the grocery store or coffee shop, we all have a role to play.

This Black Muslim and this white Jew are committed to putting an end to hate and violence against our Asian American and Pacific Islander friends and fellow citizens — after the tragic murders in Atlanta, now more than ever. We don’t want to live in a society where only the people facing hate and discrimination are the ones speaking up about it and acting to stop it.

We believe every American has a stake in creating a hate-free society. Join us.