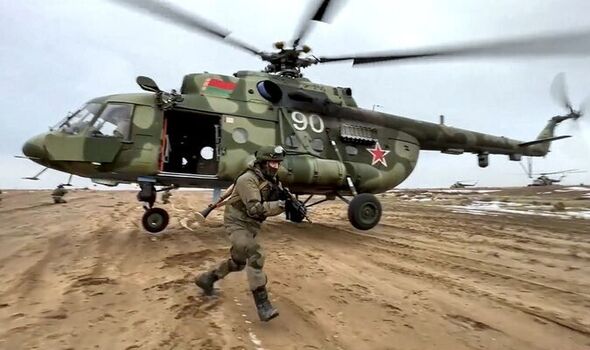 It came as separatists in East Ukraine mobilised their forces, Russian special forces within the country established strategic and political targets, and Russian troop levels swelled to 170,000.

In recognition of rising tensions, Melinda Simmons, UK ambassador to Ukraine, who had refused to follow the US lead when it decamped its mission closer to the Polish border, finally relented and moved her small cadre of remaining diplomats to the British consulate in Lviv. Nato has also moved staff from Kiev to Lviv or Brussels.

Addressing a security conference in Munich, the Prime Minister said: “If Ukraine is invaded and if Ukraine is overwhelmed, we will witness the destruction of a democratic state, a country that has been free for a generation, with a proud history of elections.

“When I spoke to the prime ministers of Japan and Australia, they let me know that the economic political shocks will be on the far side of the world.”

Echoing comments by US President Joe Biden that Mr Putin had finally made his decision to invade, the PM added: “We should not underestimate the gravity of this moment and what is at stake.

“As I speak to you today, we do not fully know what President Putin intends but the omens are grim and that is why we must stand strong together.

“I fail to see how a country encompassing nearly a quarter-ofa-million square miles – the biggest nation in Europe apart from Russia itself – could then be held down and subjugated forever after a generation of freedom.

“We are now staring at a generation of bloodshed and misery.”

Later, asked whether he agreed with the US assessment that the Russian leader had made up his mind to attack, he told German radio: “I think certainly things are in motion but the question is whether it can all be pulled back, and whether the president of Russia is still able to call this operation off.

“I think that possibility must logically still exist, and therefore I think it’s absolutely vital that we have a path of dialogue, of reason.”

Foreign Secretary Liz Truss, who was also in Munich, warned that a full invasion could happen at any time.

She said: “That worst-case scenario could happen as early as next week. The reality is that Russia does want to turn the clock back.

“In the past week alone, we’ve seen a doubling of disinformation, and we’ve seen false flag operations in the Donbas region. I’m afraid that Russia has shown that they are not serious about diplomacy,” she said. US Vice-President Kamala Harris told the conference: “There is a playbook of Russian aggression and this playbook is too familiar to us all. Russia will plead ignorance and innocence. It will create false pretext for invasion and it will amass troops and firepower in plain sight.

“We now receive reports of what appears to be provocations, and we see Russia spreading disinformation, lies and propaganda. Nonetheless, in a deliberate and coordinated effort, we together are one, exposing that, and two, speaking with a unified voice.”

She added: “Our forces will not be deployed to fight Ukraine but they will defend every inch of Nato territory.”

As the conference was under way, Mr Putin oversaw strategic nuclear exercises involving the launch of hypersonic and ballistic missiles and other weapons.

He watched the drills, which included the launch of two ballistic missiles from a “situation centre” in the Kremlin, sitting alongside his close ally, Belarusian leader Alexander Lukashenko.

While the drills had been pre-planned, other developments were more ominous.

These included a full mobilisation by Russian-backed separatist leaders in breakaway regions Donetsk People’s Republic and Luhansk People’s Republic, with plans to evacuate 700,000 citizens to Russia due to alleged Ukrainian aggression – a manufactured “false flag” pretext that is widely anticipated to give Mr Putin an excuse to invade.

Russian Spetsnaz special forces have also mounted a secret “internal war” inside Ukraine, adding to the misinformation campaign and ready to strike at key targets.

According to a report by the RUSI thinktank, Dmitry Kozak, Mr Putin’s deputy chief of staff and a former Spetsnaz officer, is behind the clandestine operation.

It would co-ordinate a dozen teams of between 10-20 special forces soldiers across Ukraine to identify strategic targets and work alongside covert operators from Moscow’s FSB and SRV intelligence agencies.

“Senior Ukrainian officials are clear that they expect and have planned for a decapitation strategy against them.There is also an expectation that critical national infrastructure including telecommunications, government services, electricity and utilities will be attacked by both physical sabotage and cyber attacks,” the report said.

President Zelensky later tweeted: “Talked about security against the background of Russia’s aggressive actions. Agreed on joint next steps.

“We remain united in the pursuit of deescalation through diplomacy.

“Grateful to the UK for supporting Ukraine and co-operation for security and peace.”

Liana Semchuk, Eurasia intelligence analyst for the Sibylline strategic risk group, said that it would be “very dangerous” for Mr Zelensky to consider any prospect of creating a federal state.

“There is huge resistance to any percep- tion of capitulation in Ukraine,” she said. “And any moves to agree that would trigger a lot of domestic unrest and impact on political stability.”

However, she added: “One suggestion is that this is a way to de-escalate tensions by kicking the can down the road to buy an extra week.”

Sibylline CEO Justin Crump added: “Our understanding has always been that nothing would happen before this weekend.

“Now, we have about a week. After that, weather conditions will begin to change, with the thaw making it more difficult for Putin to deploy his heavy armour and troops, and the credibility of his position erodes.”

President of the European Commission Ursula von der Leyen warned Moscow that its thinking from “a dark past” could cost Russia a prosperous future.

She said: “The world.” has been watching in disbelief as we face the largest build-up of troops on European soil since the darkest days of the Cold War, because the events of these days could reshape the entire international order.”

US Defence Secretary Lloyd Austin, speaking on a trip to Lithuania, said he agreed that Mr Putin has made a decision to stage AN invasion.

“They are uncoiling and are now poised to strike,” he told a conference in the capital, Vilnius.

Mr Austin, a retired army general, warned that Moscow could move on Ukraine at any time.

And he listed the kinds of military capabilities that Russia has massed and repositioned near Ukraine.