WASHINGTON — An expansive bill that would pour $120 billon into jump-starting scientific innovation by strengthening research into cutting-edge technologies is barreling through the Senate, amid a rising sense of urgency in Congress to bolster the United States’ ability to compete with China.

At the heart of the sprawling legislation, known as the Endless Frontier Act, is an investment in the nation’s research and development into emerging sciences and manufacturing on a scale that its proponents say has not been seen since the Cold War. The Senate voted 86 to 11 on Monday to advance the bill past a procedural hurdle, with Democrats and Republicans united in support, and a vote to approve, along with a tranche of related China bills, is expected this month.

The nearly 600-page bill has moved swiftly through the Senate, powered by intensifying concerns in both parties about Beijing’s chokehold on critical supply chains. The coronavirus pandemic has exposed the risks of China’s dominance, as health care workers have confronted medical supply shortages and a global semiconductor shortage has shut American automobile factories and slowed shipments of consumer electronics.

The bill, led by Senators Chuck Schumer, Democrat of New York and the majority leader, and Todd Young, Republican of Indiana, is the spine of a package of legislation Mr. Schumer requested in February from the chairmen of key committees, aimed at recalibrating the nation’s relationship with China and shoring up American jobs. Taken together, the array of bipartisan bills would amount to the most significant step Congress has seriously considered in years to enhance the nation’s competitiveness with Beijing.

“If we’re going to win the next century, the United States needs to be the one discovering the next groundbreaking technologies,” Mr. Schumer said. “We have the opportunity now to set our country on a path to outinnovate, outproduce and outcompete the world in emerging industries of the 21st century, with profound consequences for our economic and national security. If we don’t lead in science and innovation, we will fall way behind.”

Passing the legislation has become a personal priority for Mr. Schumer, who early on found himself in a lonely position as one of the earliest and most vocal China hawks in the Democratic Party. Now in power, he is hoping to steer billions of dollars toward a long-held priority while securing a overwhelmingly bipartisan victory, despite the steep price tag.

“I’ve cared about this issue for decades, and there have been lots of different bills introduced by many different people,” Mr. Schumer said in an interview. “But when you are majority leader, you have the ability to put such a bill on the floor.”

But despite the bipartisan support for the endeavor, the road for the legislation has not been without challenges, and on Tuesday, Senator Mitch McConnell, Republican of Kentucky and the minority leader, warned that the measure was “not ready for prime time,” suggesting it would benefit from a “robust” round of changes during Senate debate. 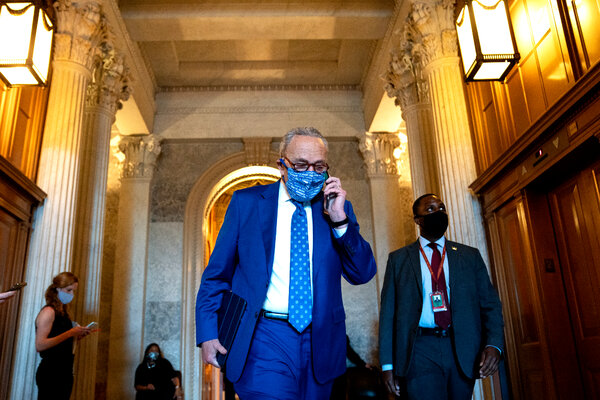 As one of the few pieces of legislation regarded as likely to become law this year, the Endless Frontier Act has become a magnet for lawmakers’ unrelated parochial items, and the target of an intensive effort by lobbyists to insert provisions favorable to individual industries.

It won approval by a crucial Senate committee last week, but not before lawmakers added more than 500 pages, including legislation authorizing a fresh round of funding for NASA, a prohibition on the sale of shark fins, and a mandate for labeling the country of origin for king crab.

Lawmakers were able, however, to beat back a number of divisive and extraneous measures that would have sunk the bill entirely.

The legislation would provide $120 billion to support and expand research into new technologies, including semiconductors, artificial intelligence, and robotics.

It would include $10 billion for the creation of 10 technology hubs to connect manufacturing hubs and research universities across the United States in an effort to scatter investments, rather than building onto already established tech behemoths on the two coasts.

The goal is to position the United States to be on the forefront of emerging technologies while strengthening the nation’s manufacturing capacity and building a pipeline of researchers and apprentices to carry it out, an aim that has united universities, industry groups and national laboratories — all of which stand to benefit — around the legislation.

“This would really put the spotlight on that next stage of innovation,” said Debbie Altenburg, an associate vice president at the Association of Public and Land-Grant Universities. “There is a significant investment in scholarships and fellowships and traineeships, so that we are also making sure that we’re investing in domestic work force.”

Yet the issue of how to mete out the research money has been hotly debated. Mr. Young’s complaints last week came as he unsuccessfully tried to block a bipartisan push to steer about half of the funding — all of which was initially intended for new initiatives at the National Science Foundation — to labs across the country run by the Energy Department.

A bipartisan group of senators who have one or more department-run labs in their states, including Senators Joe Manchin III of West Virginia, a critical Democratic vote, and Ben Ray Luján, Democrat of New Mexico, had clamored for the change.

Mr. Young had argued that the bill should devote money only toward applied research that would yield a tangible product to help the United States compete with China. But many lawmakers in both parties — including on the House science committee, which also must approve the legislation — have instead worked to divert it to labs in their states and districts that conduct basic research.

Other senators also seized on the opportunity to insert pet provisions into the bill.

Senator Maria Cantwell of Washington State, the chairwoman of the commerce committee, added an entire authorizing bill for NASA, as well as provisions that would help Boeing, based in her state. A group of Republicans led by Senator Marsha Blackburn of Tennessee inserted a measure requiring the government to study whether the Chinese government was using sister city partnerships as a vehicle for espionage.

Senators also approved a provision by Senator Gary Peters, Democrat of Michigan, to pump $2 billion into the semiconductor industry, in an attempt to blunt the shortages that have shuttered auto plants in Detroit and elsewhere.

Mr. Schumer announced on Tuesday evening that lawmakers would also consider additional funding for legislation that was passed last year to bolster the semiconductor industry. Negotiations had become ensnared in a partisan labor dispute over whether to require manufacturers to pay their employees the prevailing wage.

The industry is lobbying intensively for the money.

“Doing so would turbocharge U.S. chip production and innovation and help keep America at its competitive best for years to come,” said John Neuffer, the president of the Semiconductor Industry Association.