WASHINGTON — A key Senate committee deadlocked on Tuesday over Democrats’ sweeping proposed elections overhaul, previewing a partisan showdown on the Senate floor in the coming months that could determine the future of voting rights and campaign rules across the country.

The tie vote in the Senate Rules Committee — with nine Democrats in favor and nine Republicans opposed — does not prevent Democrats from moving forward with the 800-page legislation, known as the For the People Act. Proponents hailed the vote as an important step toward adopting far-reaching federal changes to blunt the restrictive new voting laws emerging in Republican-led battleground states like Georgia and Florida.

But the action confronted Democrats with a set of thorny questions about how to push forward on a bill that they view as a civil rights imperative with sweeping implications for democracy and their party. The bill as written faces near-impossible odds in the evenly divided Senate, where Republicans are expected to block it using a filibuster and at least one Democrat, Senator Joe Manchin III of West Virginia, remains opposed.

With their control in Washington potentially fleeting and Republican states racing ahead with laws to curtail ballot access, Democrats must reach consensus among themselves on the measure, and decide whether to attempt to destroy or significantly alter the Senate’s filibuster rules — which set a 60-vote threshold to overcome any objection to advancing legislation — to salvage its chances of becoming law.

“Here in the 21st century, we are witnessing an attempt at the greatest contraction of voting rights since the end of Reconstruction and the beginning of Jim Crow,” Senator Chuck Schumer, Democrat of New York and the majority leader, said at the session’s outset.

He cited a new law in Iowa restricting early and mail-in voting, another in Florida cutting back on the use of drop boxes and making it harder to vote by mail, and one in Georgia, where Democrats have attacked the decision to bar third parties from giving water or snacks to voters waiting in long lines.

“These laws carry the stench of oppression, the smell of bigotry,” Mr. Schumer said, telling Republicans they faced a “legacy-defining choice.” “Are you going to stamp it out, or are you going to spread it?”

Among other changes, Democrats’ bill would essentially overwrite such changes by setting a nationwide floor on ballot access. Each state would be required to implement 15 days of early voting, no-excuse vote by mail programs like the ones many states expanded during the pandemic and automatic and same-day voter registration. Voting rights would be restored to those who had served prison sentences for felonies, and states would have to accept a workaround neutering voter identification laws that Democrats say can make it harder for minorities to vote.

Over eight hours of debate, the clash only served to highlight how vast philosophical differences over elections have come to divide the two parties in the shadow of former President Donald J. Trump’s lies about fraud and theft in the 2020 contest.

Republicans gave no indication they were willing to cede any ground to Democrats in a fight that stretches from the Capitol in Washington to state houses across the country. Instead, with Mr. Schumer’s Republican counterpart, Senator Mitch McConnell of Kentucky, taking the lead, they argued that Democrats were merely using state laws as a fig leaf to justify an unnecessary and self-serving federal power grab “cooked up at the Democratic National Committee.”

“Our democracy is not in crisis, and we’re not going to let one party take over our democracy under the false pretense of saving it,” Mr. McConnell said.

He and other Republicans on the committee were careful to sidestep many of Mr. Trump’s outlandish claims of fraud, which have taken deep root in the party, fueling the Jan. 6 assault on the Capitol and prompting state lawmakers to adjust their election laws. But in a late-afternoon statement, Mr. Trump, who still towers over the party, made clear the connection between those lies and the push to curb ballot access, calling for every state to adopt restrictive voting laws, including voter-identification requirements, “so we never again have an election rigged and stolen from us.”

While the Rules Committee vote fulfilled Democrats’ pledge to thoroughly consider the bill before it reached the floor, it left an enormous challenge for Mr. Schumer. Progressive activists are spending millions of dollars to ramp up pressure on Democrats to quickly scrap the filibuster or miss a chance to implement the changes before 2022. The bill already passed the House with only Democratic votes.

“What is intense pressure now is only going to grow,” said Eli Zupnick, a former Senate leadership aide and a spokesman for Fix Our Senate, a coalition of liberal groups pushing to eliminate the filibuster. “There is no way out. There is no third option. It is either the filibuster or the For the People Act.”

But Mr. Manchin and a small group of others remain uncomfortable both with changing Senate rules and with provisions of the underlying bill, which also includes a public financing system for congressional candidates, far-reaching new ethics requirements for Congress and the White House, an end to gerrymandering congressional districts and dozens of other significant changes. 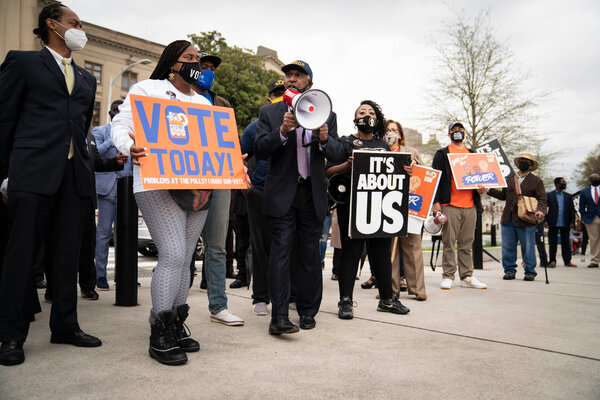 Democratic senators plan to meet privately Thursday afternoon to begin deliberations over how to move forward, according to two Democratic officials who discussed the scheduled private session on the condition of anonymity.

At least some senators appear ready to make wholesale changes if necessary to win the support of Mr. Manchin and other hesitant Democrats. One of them, Senator Tim Kaine of Virginia, said the stakes were “existential” if Democrats failed.

“If we can’t unify behind it, I think there are going to be some tough decisions to maybe set pieces of it aside,” Mr. Kaine said in an interview.

Democrats proposed only modest changes during Thursday’s marathon session in the Rules Committee.

Republicans rejected a large package of changes meant to address concerns raised primarily by state elections administrators who have complained that some voting provisions would be expensive or onerous to implement.

Republicans also rejected a proposal by Senator Jon Ossoff, Democrat of Georgia, to strike down bans, like one included in Georgia’s new law, on providing water to voters stuck in long lines to cast ballots.

The Battle Over Voting Rights

Amid months of false claims by former President Donald J. Trump that the 2020 election was stolen from him, Republican lawmakers in many states are marching ahead to pass laws making it harder to vote and changing how elections are run, frustrating Democrats and even some election officials in their own party.