Manchin described the one-hour meeting as “very productive and very informative” but said his mind had not changed after announcing in a Sunday newspaper column he would oppose the bill, known as the For the People Act.

In a 50-50 Senate that Democrats control only because Vice President Kamala Harris is the tie-breaking vote, Manchin is a key lawmaker on almost every partisan issue, including voting rights. And his opposition to doing away with the Senate filibuster means the bill would need to get 60 votes to force a floor vote even if he ended up supporting the bill. 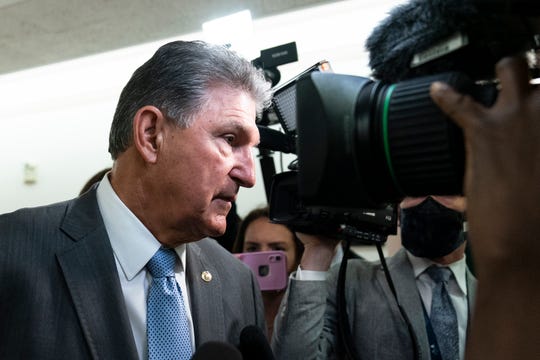 Sen. Joe Manchin talks to reporters as he arrives for a hearing in Washington, D.C., on June 8, 2021. (Photo: Alex Brandon, AP)

They shared their concerns and priorities related to voting and policing reform with Manchin, promoting not just the For the People Act, but also the John Lewis Voting Rights Advancement Act and George Floyd Justice in Policing Act which seeks to punish law enforcement officers who abuse their authority.

In a statement, the group expressed that “the two voting rights bills are a top priority and essential to protect the freedom to vote. There continues to be an unprecedented partisan wave of state legislative proposals that are aimed at denying the right to vote – particularly for Black and Brown people.”

The push to pass the For The People Act comes as several Republican-controlled states continue to pass a series of election and voting security laws, which opponents of the laws argue will make it harder for people to vote – especially people of color.

Senate Majority Leader Chuck Schumer told reporters Tuesday he was determined to bring the voting rights bill to the floor the week of June 21.

“We’re going to put S1 on the floor,” the New York Democrat said, referring to its legislative title. “As I said, we’re open to changes and modifications as long as it does the job.”

Sen. Dick Durbin, D-Ill., told reporters that Manchin is in the process of putting together a list of items in the voting rights bill that were acceptable and objectionable to him.

“That’s what we’re waiting on,” he said.

Sen. Raphael Warnock, D-Ga., said he talked to Manchin over the weekend and  continues to seek compromise to approve the voting-rights bill. Warnock, a minister, said the late Rep. John Lewis was a member of his church, but that using legislation named for him wouldn’t be enough to cover the protections for voting included in the For the People Act.

“We’ve got to pass John Lewis in order to protect voting rights. We’ve got to pass the For the People Act to provide some basic standards for our elections,” Warnock told USA TODAY Tuesday.

He said voting rights have been curtailed for the last decade through long lines, polling places being moved at the last minute and voter names purged from the rolls.

“This is not theoretical stuff, this is people’s actual ability to exercise their basic constitutional rights,” Warnock said. “Voting is not a privilege, it’s a right.”

Manchin said the discussion included his concerns about protecting voting rights and the fragility of the democracy. But he said they didn’t take positions for or against the John Lewis legislation, for example.

“There was nothing basically for or against,” Manchin said. “It’ basically everyone’s position was discussed. It was an excellent meeting.”

Manchin said conversations will continue with participants in the meeting.

New Jersey Democratic Sen. Cory Booker, who is African American, said he doesn’t think Manchin’s mind is made up.

“I definitely don’t, especially after the conversations he’s been having with a lot of my colleagues in terms of what the possibilities are for pushing back on some of the most oppressive of voter suppression and restriction laws since Jim Crow.”

Manchin cited the lack of Republican support and bipartisanship as the reason for opposing the legislation, stating that voting and election reform “done in a partisan manner will all but ensure partisan divisions continue to deepen,” Manchin said in an op-ed for the Charleston (West Virginia) Gazette-Mail.