Home » Politics » Secret Talks and a Hidden Agenda: Behind the U.S. Defense Deal that France Called a ‘Betrayal’

Secret Talks and a Hidden Agenda: Behind the U.S. Defense Deal that France Called a ‘Betrayal’

In meeting after meeting with their French counterparts, U.S. officials gave no heads-up about their plans to upend France’s largest defense contract. 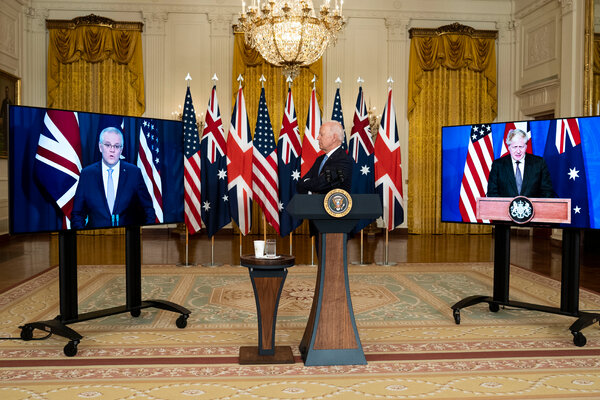 The United States and Australia went to extraordinary lengths to keep Paris in the dark as they secretly negotiated a plan to build nuclear submarines, scuttling France’s largest defense contract and so enraging President Emmanuel Macron that on Friday he ordered the withdrawal of France’s ambassadors to both nations.

Mr. Macron’s decision was a stunning and unexpected escalation of the breach between Washington and Paris, on a day that the two countries had planned to celebrate an alliance that goes back to the defeat of Britain in the Revolutionary War.

Yet it was driven by France’s realization that two of its closest allies have been negotiating secretly for months. According to interviews with American and British officials, the Biden administration had been in talks since soon after President Biden’s inauguration about arming the Australian Navy with a fleet of nuclear-powered submarines that could patrol areas of the South China Sea and beyond that Beijing is trying to dominate with its own military forces.

But one thing was standing in their way: a $60 billion agreement that called for Australia to buy a dozen far less sophisticated, and far noisier, conventionally-powered submarines from France.

For Mr. Biden, who has made pushing back on China a central tenet of his national security policy, those French submarines would not do. They did not have the ability to range the Pacific and show up unexpectedly off Chinese shores — adding an element of military advantage for the West. And the Australians, officials say, came to the same conclusion long ago, after being bullied by an increasingly emboldened China.

In meeting after meeting with their French counterparts — some including Mr. Biden and Secretary of State Antony J. Blinken — the Americans did not give France a heads-up about their plans to upend the French deal, the officials said, asking for anonymity to discuss sensitive diplomacy. U.S. officials only told the French about the new agreement hours before it was publicly announced at the White House in a virtual meeting with Mr. Biden, Prime Minister Boris Johnson of Britain and Prime Minister Scott Morrison of Australia.

Mr. Biden’s decision was the result of a brutal calculus that nations sometimes make in which one ally is determined to be more strategically vital than another — something national leaders and diplomats never like to admit to in public. And it was a sign that as Mr. Biden begins to execute what the Obama administration, 12 years ago, called the “pivot to Asia,” there is the risk of stepping on political land mines as old, traditional allies in Europe feel left behind.