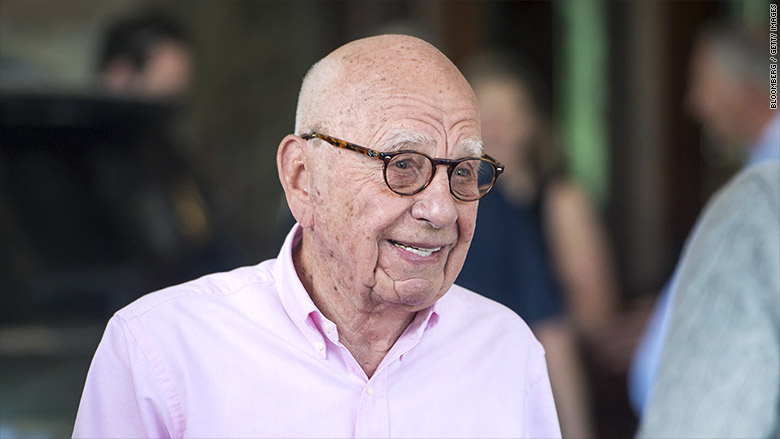 Rupert Murdoch is having a great summer.

Three times this summer, government regulators have had to make major decisions regarding media ownership. Three times, the decision has gone the way that Murdoch and his company, 21st Century Fox, would have wanted.

Murdoch is known to speak regularly with President Donald Trump. And some of the biggest stars of Murdoch’s network, Fox News, have arguably been the president’s most important supporters over the past year and a half. There’s no evidence that either of those things led to the regulators’ decisions, or that the decisions coming together this way are anything but a coincidence, but Murdoch’s string of good fortune has set some tongues wagging.

“Everything seems to be falling Rupert’s way,” said BTIG media and technology analyst Rich Greenfield, adding that Fox News also secured two interviews with Trump and an interview with Russian President Vladimir Putin this week. “Murdoch helped get the president elected. I think it would be naive to think there isn’t a direct correlation.”

Brian Wieser, an analyst with Pivotal Research Group, a media research firm, noted that “It could be a total complete coincidence that a number of things have played in Murdoch’s favor,” but said it’s hard to ignore the political overtones.

“It could also just be just the collection of people in those positions (of government regulation) happen to be doing things that are what Trump wants and what Murdoch wants,” Wieser said.

Those who say Murdoch’s proximity to the administration has nothing to do with the recent regulatory decisions point out that many of Murdoch and Trump’s most ardent opponents actually support the government’s actions. Politicians like Sens. Elizabeth Warren, Bernie Sanders and Richard Blumenthal wanted the government to do the things that it did. But those things also happen to help Murdoch.

It started in June, when the Justice Department approved Disney’s bid for 21st Century Fox six months after the two companies reached a deal — a quick turnaround for these types of mergers. A year after AT&T announced its bid for Time Warner, the government filed a lawsuit to block the takeover.

Then last week, the government filed to appeal a judge’s approval of AT&T’s purchase of Time Warner, CNN’s parent company. Whether the appeal is successful or not, the filing alone helped Murdoch: It likely helped scare Comcast out of the bidding war for much of 21st Century Fox, clearing the way for Disney and its $71 billion bid to go forward.

A Comcast-Fox combo would have likely faced the same regulatory hurdles as the AT&T-Time Warner merger. This possibility was enough to kill the Comcast and 21st Century Fox deal, Wieser said.

Greenfield said he didn’t think the appeal is the reason why Comcast dropped 21st Century Fox, but said that any chance that an appeal could lead to Turner, the AT&T subsidiary that owns CNN, being sold off is a good thing for Murdoch.

“Anything that leads to a weaker Turner, leads to a weaker CNN, because right now CNN is part of a huge, deep-pocketed company with huge distribution platforms,” Greenfield said. “If Turner is on its own, it’s in a much weaker long term position.”

And finally this week, the Federal Communications Commission shocked the media world by putting Fox’s conservative rival Sinclair and its bid for Tribune Media on life support. FCC chair Ajit Pai announced on Monday that he had “serious concerns” about the transaction. Though Pai had previously been accused of loosening station ownership rules to help Sinclair, Pai this week criticized the company for striking deals to sell stations to buyers who have close ties with Sinclair as part of an effort to stay within ownership cap rules.

Sinclair has been viewed as a possible rival to Fox News as the former builds up a huge national footprint and snaps up talent like former Trump advisor Boris Epshteyn and former CBS correspondent Sharyl Attkisson. According to Politico, Sinclair has even approached current and former Fox talent like Jeanine Pirro and Eric Bolling. Last month, BuzzFeed reported Sinclair was preparing to launch a free streaming app called STIRR, a 24/7 TV channel featuring local news and national programming.

Sinclair tried to amend its Tribune deal to appease the commission, but the FCC voted on Thursday to send the transaction to an administrative law judge, citing a need to investigate “whether Sinclair engaged in misrepresentation and/or lack of candor in its applications with the Commission.” The transaction now enters a lengthy hearing process that many media investors see as a death knell for the deal.

Sinclair has denied misleading the FCC “in the strongest possible manner,” a spokesperson for the company said Monday.

If the Sinclair deal with Tribune falls through, it creates “less risk to Fox News from a new competitor and the potential to buy some of the better stations,” Greenfield said. “It’s great to be a Fox Shareholder right now. It’s certainly been a pretty incredible year for 21st Century Fox on all fronts.”