Republicans Move to Limit a Grass-Roots Tradition of Direct Democracy

These moves were all the product of ballot initiatives, a century-old fixture of American democracy that allows voters to bypass their legislatures to enact new laws, often with results that defy the desires of the state’s elected representatives. While they have been a tool of both parties in the past, Democrats have been particularly successful in recent years at using ballot initiatives to advance their agenda in conservative states where they have few other avenues.

But this year, Republican-led legislatures in Florida, Idaho, South Dakota and other states have passed laws limiting the use of the practice, one piece of a broader G.O.P. attempt to lock in political control for years to come, along with new laws to restrict voting access and the partisan redrawing of congressional districts that will take place in the coming months.

So far in 2021, Republicans have introduced 144 bills to restrict the ballot initiative processes in 32 states, according to the Ballot Initiative Strategy Center, a liberal group that tracks and assists citizen-driven referendums. Of those bills, 19 have been signed into law by nine Republican governors. In three states, Republican lawmakers have asked voters to approve ballot initiatives that in fact limit their own right to bring and pass future ballot initiatives.

“They have implemented web after web of technicalities and hurdles that make it really hard for community-based groups to qualify for the ballot and counter why ballot initiatives were created in the first place,” said Chris Melody Fields Figueredo, the executive director of the Ballot Initiative Strategy Center. “This is directly connected to every attack we’ve seen on our democracy.”

Republicans are trying to block that path in a wide variety of ways, including blunt measures that take direct aim at the process and others that are more subtle. 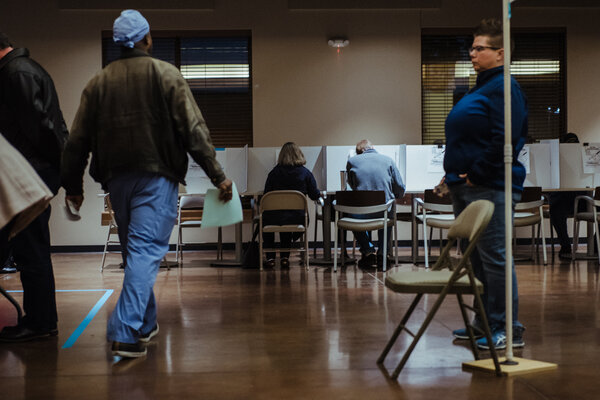 In South Dakota, where in 1898 a socialist Catholic priest named Robert Haire pioneered the American ballot initiative process, Republicans this year passed a law mandating a minimum type size of 14 points on ballot initiative petitions. Combined with a requirement that all initiatives, along with their signatures, fit on a single sheet of paper, the new type size will force people gathering signatures for petitions to tote around large pieces of paper, including some that unfold to the size of a beach towel. The new rules will increase the cost of ballot initiative efforts and limit the scope of the text that explains often-complex legislative proposals.

“People who carry petitions have been very resourceful,” said State Senator Al Novstrup, a 66-year-old bespectacled Republican who sponsored the bill because, he said, the text of ballot initiatives is often too small for him to read. “There is no restriction on the size of the paper.”

In Mississippi last week, the conservative State Supreme Court, ruling on a Republican lawsuit, invalidated the state’s entire initiative process on a technicality, throwing out a 2020 referendum that legalized medical marijuana and halting an effort to collect signatures to place Medicaid expansion on the state’s 2022 ballot. The constitutional amendment that created the state’s initiative law was enacted in 1992, when the state had five congressional districts, and required signatures from voters in each. Mississippi has had just four districts since the 2000 census.

And in Florida, Gov. Ron DeSantis signed legislation introducing a $3,000 limit on campaign contributions to ballot initiatives — cutting off a key source of revenue to subsidize the gathering of signatures for petitions.

The Republican effort now gaining steam has been years in the making.

In South Dakota, Republicans have in recent years limited the window for collecting petition signatures to the cold winter months and required all canvassers to register with the state and wear state-issued identification cards while gathering signatures, hurdles that the state’s few Democrats say have increased the difficulty of qualifying for the ballot.

“Republicans have every statewide office, 85 percent of the Legislature and every constitutional office,” said Reynold F. Nesiba, one of three Democrats in the 35-member State Senate. “The one place where Democrats can make progress is through the initiated measure process, and the Republicans want to take that away, too.”

Now the state’s Republican lawmakers will put before South Dakota voters a constitutional amendment to increase the threshold to pass referendums — raising it to 60 percent from a simple majority. (The threshold to raise the threshold? Still just 50 percent.)

The question will appear on the state’s June 2022 primary ballot, which is expected to be dominated by Republican contests. The new threshold could be in effect for the November 2022 general election, when a referendum on expanding Medicaid is expected to go before voters.

“It’s a fair protection for the citizens of our state,” he said on Thursday.

The proposals to limit ballot initiatives are part of a running campaign by conservatives to box out progressive policy efforts. To get a referendum on the ballot, petitioners have to collect tens of thousands of signatures; the numbers vary by state. The process can cost millions, so the initiative campaigns are often underwritten by large donors.

In Arizona, Republicans have been smarting since 2018, when Tom Steyer, the billionaire Democrat who later ran for president, helped finance an ultimately unsuccessful effort to pass a constitutional amendment requiring that half of the state’s energy come from renewable sources.

In February, Tim Dunn, a Republican state representative, introduced a resolution seeking to increase the threshold for a ballot initiative to pass from a majority to 55 percent.

“When you look at the actual people that actually vote on a ballot initiative, the amount of people compared to the citizens of Arizona is quite small, and the outside money could influence that pretty easily,” Mr. Dunn said.

Florida Republicans voiced a similar rationale for a new law signed by Gov. Ron DeSantis that limits the contributions to a citizen-organized ballot initiative to $3,000 per person. Republicans had been frustrated by some donors who supported ballot initiatives, including John Morgan, a wealthy Orlando lawyer, who spent millions of dollars supporting measures to legalize medical marijuana and raise the minimum wage to $15 per hour.

Such campaigns are so expensive, advocates say, because of a cascade of limitations that the Florida Legislature has placed on initiative efforts. Recently, the Legislature cut in half the time period in which signatures must be submitted before they expire; banned the practice of paying signature collectors on a per-signature basis; required those gathering signatures to use a separate piece of paper for each signature; and required every signature to be verified, banning a much cheaper “random sampling” process.

“With every successful initiative or every big effort that the Legislature doesn’t approve of, there is a new law to make it more costly, more burdensome, to propose an initiative,” said Nicholas Warren, a lawyer at the A.C.L.U of Florida.

Republican sponsors of the new law in Florida agree that constitutional amendments will be harder to pass. That is their goal.

“I don’t dispute that it will be more difficult to put a referendum on the ballot under the statute, but that’s the point,” said State Senator Ray Rodrigues, a Republican who sponsored the bill.

In Missouri, 22 Republican-sponsored bills this year have sought to limit the state’s ballot initiative process, including one that would double the number of signatures required to qualify for the ballot and increase the threshold for a measure to pass, from a simple majority to two-thirds, which would be the highest in the country.

“This was really just politicians trying to dramatically limit the constitutional rights of Missourians to use the process while telling us it’s for our own good,” said Richard von Glahn, the policy director of Missouri Jobs With Justice, a progressive organization.

In Idaho, Gov. Brad Little, a Republican, signed a law last month that will make it significantly harder to meet the signature requirements for an initiative to be added to the ballot. Before, an initiative needed signatures from 6 percent of the population of 18 different legislative districts. The new law signed by Mr. Little will now require signatures from 6 percent of residents in each of Idaho’s 35 legislative districts.

And in Mississippi, the State Supreme Court last week ruled that the initiative process was “unworkable and inoperative” because of the disparity between the number of congressional districts in the law and the number of districts the state has now.

Mayor Mary Hawkins Butler of Madison, Miss., a Republican who filed the lawsuit that led to the invalidation of the state’s initiative process, said that the legal action had been intended to protect her city’s ability to deter marijuana retailers through zoning.

What Vikas Yatra is Modi talking about?