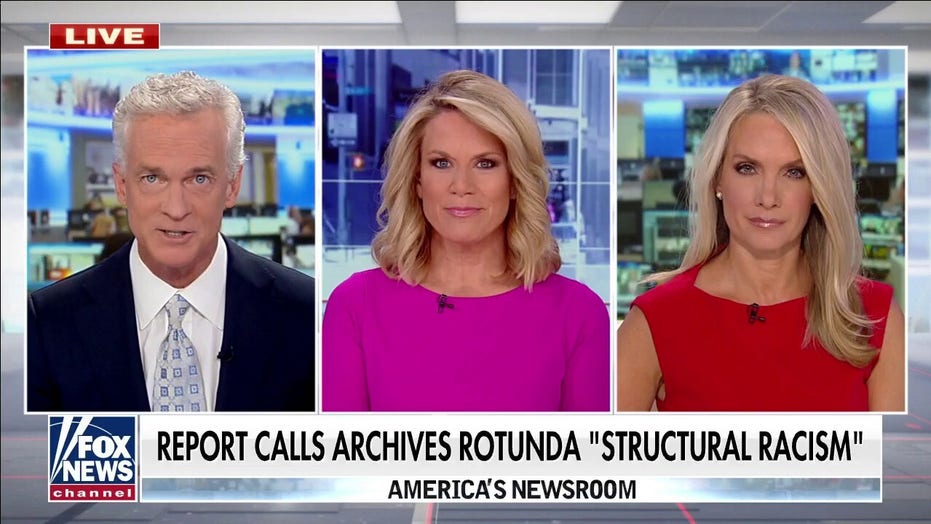 Fox News’ Martha MacCallum discusses the report from the National Archives task force that said the rotunda is an example of ‘structural racism’ and reacts to a Washington Post article that compared Dan Crenshaw to George Wallace.

“Most disturbing is use of the alert for our nation’s founding documents, including the Constitution, Declaration of Independence and the Bill of Rights,” Lankford wrote in the letter exclusively obtained by Fox News. “It should be removed immediately.”

NARA told Fox News in an email statement on Thursday that the “Harmful Content Warning is a general warning and is not connected to the U.S. Constitution or to any specific records” and “automatically appears at the top of every page” of the National Archives’ online catalog.

“Our records span the history of the United States, and it is our charge to preserve and make these historical records available to the public,” NARA told Fox News. “Some of the materials presented in the Catalog show or describe violent or graphic events, or use outdated, biased, offensive, or violent language.”

“We do not alter or censor original documents,” they added. “Accordingly, like many of our peer institutions, we have placed a warning in the Catalog so that researchers are not surprised if they encounter such content.”

In the letter, Lankford pointed out that NARA’s warning says “some of the materials presented here may reflect outdated, biased, offensive and possibly violent views and opinions” before tearing into the agency.

“This obviously politically-charged qualifier goes leaps and bounds beyond the role of NARA, which has been established to operate as a nonpartisan entity responsible for providing public access to federal government records,” Lankford wrote.

“While our nation undoubtedly has stains on its history, we have, from our founding, created the most free and diverse society on earth,” the senator continued. “Nevertheless, the people of the United States have continued their mission of forming a more perfect union.”

The Oklahoma Republican told the archivist that America “should take pride in our founding documents” and not act as if we are “ashamed” of the freedoms guaranteed to us by our country.

In addition to demanding NARA remove the warning from the key American documents, Lankford said the NARA Task Force on Racism’s report should be “revoked.”

Lankford also asked Ferriero a multitude of questions, including if he views the Constitution, Bill of Rights and other founding documents as “presenting outdated, biased, offensive and violent views and opinions” and whether the warning would be physically added to exhibits.

“I look forward to your prompt response and reiterate my expectation that the alert be immediately removed,” Lankford wrote.

The warning in question came after the Task Force on Racism’s report that deemed the National Archives’ own rotunda to be an example of “structural racism.”

Houston Keene is a reporter for Fox News Digital. You can find him on Twitter at @HoustonKeene