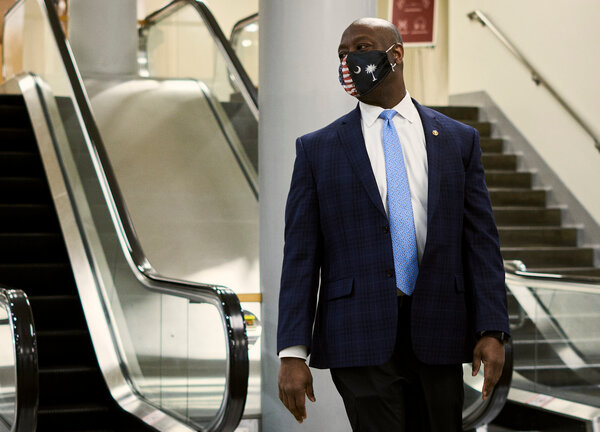 Senator Tim Scott of South Carolina delivered a response to President Biden’s address to a joint session of Congress on Wednesday. Mr. Scott, the Senate’s only Black Republican, is a pioneering figure within his party.

The following is a transcript of his remarks.

But President Biden promised you a specific kind of leadership. He promised to unite a nation. To lower the temperature. To govern for all Americans, no matter how we voted. This was the pitch. You just heard it again.

But our nation is starving for more than empty platitudes. We need policies and progress that bring us closer together. But three months in, the actions of the president and his party are pulling us further and further apart.

I won’t waste your time tonight with finger-pointing or partisan bickering. You can get that on TV anytime you want. I want to have an honest conversation about common sense and common ground. About this feeling that our nation is sliding off its shared foundation, and how we move forward together.

Growing up, I never dreamed I would be standing here tonight. When I was a kid, my parents divorced. My mother, my brother and I moved in with my grandparents. Three of us, sharing one bedroom. I was disillusioned and angry, and I nearly failed out of school. But I was blessed.

First, with a praying momma. And let me say this: To the single mothers out there, who are working their tails off, working hard, trying to make ends meet, wondering if it’s worth it? You can bet it is. God bless your amazing effort on the part of your kids.

I was also blessed by a Chick-fil-A operator, John Moniz. And finally, with a string of opportunities that are only possible here in America.

This past year, I’ve watched Covid attack every rung of the ladder that helped me up. So many families have lost parents and grandparents too early. So many small businesses have gone under. Becoming a Christian transformed my life — but for months, too many churches were shut down.

Most of all, I’m saddened that millions of kids have lost a year of learning when they could not afford to lose a single day. Locking vulnerable kids out of the classroom is locking adults out of their future. Our public schools should have reopened months ago. Other countries’ did. Private and religious schools did.