WASHINGTON – Attorney General Merrick Garland said the Justice Department is working on “surfacing potentially problematic matters” tied to the agency’s aggressive leak investigations under the Trump administration, adding that “important questions … must be resolved” regarding efforts to obtain phone records of lawmakers and their staff.

“As I stated during my confirmation hearing, political or other improper considerations must play no role in any investigative or prosecutorial decisions. These principles that have long been held as sacrosanct by the DOJ career workforce will be vigorously guarded on my watch, and any failure to live up to them will be met with strict accountability,” Garland said in a statement Monday.

Meanwhile, the chief of the Justice Department’s National Security Division, John Demers, is departing amid a furor over phone record disclosures, a Justice official said Monday. The resignation of Demers comes a day after Senate Majority Leader Chuck Schumer, D-N.Y., called for Demers to testify about the DOJ action involving the lawmakers.

A Justice official said Demers’ had intended to leave the department before the end of June after remaining at his post following the Trump administration. 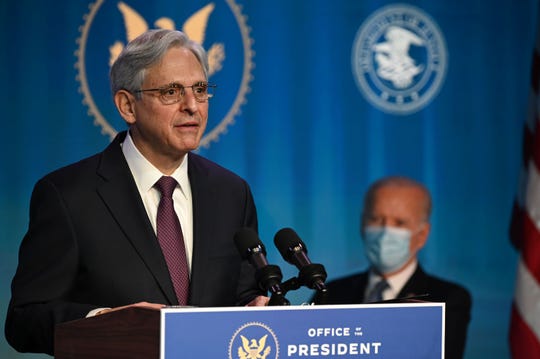 If Merrick Garland is confirmed as attorney general, President Joe Biden says, his loyalty will be to the law, not the White House. (Photo: JIM WATSON, AFP via Getty Images)

The Justice Department’s independent watchdog has launched a broad investigation into whether the Trump administration and its two attorneys general improperly seized the communications records of House Democratic lawmakers, their staff and journalists as part of an aggressive leak investigation in 2018.

Inspector General Michael Horowitz said last week his office will investigate whether the Justice Department complied with its own policies and procedures when it subpoenaed the communications data of Democratic lawmakers, their associates, as well as the phone records of reporters from The New York Times, The Washington Post and CNN.

Democratic Reps. Adam Schiff and Eric Swalwell, two of former President Donald Trump’s most outspoken critics in Congress, confirmed last week that Trump-era Justice Department officials secretly seized their Apple phone data and that of 10 or so other House Intelligence Committee members, their aides and relatives, one of whom is a minor.

The revelations angered Democrats who have long accused the former president of using the Justice Department to go after his perceived political enemies. Democratic leaders promptly called for an investigation and demanded that former Attorneys General William Barr and Jeff Sessions testify about the seizure of phone records.

“The news about the politicization of the Trump administration Justice Department is harrowing,” House Speaker Nancy Pelosi, D-Calif., said in a statement. “These actions appear to be yet another egregious assault on our democracy waged by the former president.”

The federal grand jury subpoena, which Apple received in February 2018, appeared to have cast a wide net, seeking data on more than 100 phone numbers and email addresses to find out who talked to reporters.

Apple said the subpoena sought “customer or subscriber account information” tied to 73 phone numbers and 36 email addresses. The subpoena did not state the nature of the investigation, Apple said, adding that the company provided only metadata and account subscriber information, not emails or pictures.

The subpoena included a gag order signed by a federal magistrate judge that kept a lid on the investigation for three years. The Biden administration did not seek to extend the gag order, allowing Apple to notify the subjects of the subpoena on May 5 that their phone data had been seized.

The investigation did not find evidence tying the lawmakers to leaks to the press, Schiff and Swalwell said last week.

“This baseless investigation, while now closed, is yet another example of Trump’s corrupt weaponization of justice,” Schiff, D-Calif., said last week.

Swalwell, D-Calif., said lawmakers’ family members were “targeted punitively” and the gag order was motivated by fear of a public perception that the Trump administration was going after the former president’s perceived enemies.

Earlier this month, the Justice Department announced it will no longer secretly obtain journalists’ records during leak investigations, a departure from a policy used by previous administrations to try to identify sources who provided journalists with classified information.