(CNN Business)The BBC credits Queen Elizabeth II’s coronation in 1953 as the “event that did more than any other to make television a mainstream medium.”

Fitting, then, that her funeral on Monday marks the end of TV’s dominance that started when she came to the throne.
Back then, the lack of TV sets in the mainstream meant that viewers gathered in friends’ living rooms, churches and other public spaces to watch the coronation, creating a shared broadcast experience and a shared sense of history.

Now, the divide between social media and television in the immediate wake of the queen’s death has highlighted the way new media are changing the culture. On social media, the queen was often discussed and, in many cases, denounced for Britain’s history of colonialism and her handling of royal scandals. Television, meanwhile, largely stuck with a script of fond remembrance and celebration of her 70-year reign, especially within the first 24 hours. The social media narrative challenged and perhaps even altered the one initially featured on TV.

Yet, for all the revolutionary media disruption and fragmentation already engendered by the internet, television remains the principal storyteller of national life in countries like the US, Britain, Canada, Australia and New Zealand.

“Yes, the Queen’s coronation was the epochal moment that made the Brits realize that television was the essential furniture of modern life … and the glue for postwar British culture,” said Thomas Doherty, a media and cultural historian at Brandeis University.
Although acknowledging massive changes in the media landscape between 1953 and today, he nevertheless added, “I do think the final send off and eulogies will have a huge audience—the drama, the pageantry, the ritual … a universal shared experience that TV thrives on.” 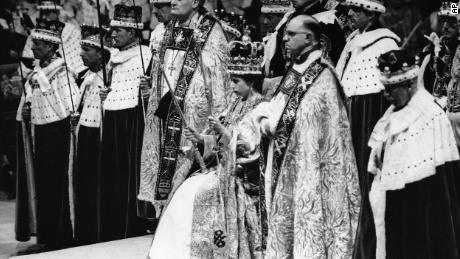 Predicting a huge TV audience for Queen Elizabeth’s funeral seems a safe bet, at least in the UK where the line to view her coffin in Westminster Hall was five miles long Friday morning with mourners temporarily being turned away. By Friday afternoon, the UK government’s live queue tracker indicated that mourners would have to wait at least 22 hours to see Queen Elizabeth lying in state.
Audience predictions for the US are a more complicated matter thanks in part to the time difference of five hours between the UK and America’s Eastern Time Zone. CNN, for example, will start carrying live TV coverage at 5 a.m. ET Monday, which is 10 a.m. in Britain.
The BBC will stream events starting when Westminster Hall opens at 8 a.m. UK time. Its coverage will include the funeral and committal services. It will be the first time cameras are allowed inside the funeral of a monarch. BBC’s coverage will be on both TV and its website where it will be available globally.
The time difference between US and UK viewers as well as workday schedules could result in more Americans seeing the funeral later in the day on the Internet and social media video than on live TV. Robert Thompson, a professor of media and popular culture at Syracuse University thinks the time difference is enough to affect Monday’s audience size.
“Time difference will make a big difference and yes, people will take advantage of the time shifting, something that started with clever VCR owners back in 1981 for the Charles-Diana wedding, and is much easier now,” Thompson said.
Although Thompson expects a “very big” audience, he does not see it proportionally rivaling the 1953 the coronation.
“I don’t think this funeral can possibly penetrate the global attention the way the 1953 coronation did — or even the wedding in 1981. There may be more viewers, but there are also more people. The identity and positioning of the monarchy is a lot different than it was less than a decade after the Second World War, and the menu of things to which people could pay attention was a lot, lot smaller then.”

How the queen ushered in the TV era

During the queen’s inauguration in 1953, Americans could only get full coverage on a delayed basis. NBC and CBS News, the two leading TV news divisions of the era, filmed the events in Britain and then flew the footage across the Atlantic to be shown on the networks, according to the June 10, 1953 issue of the trade publication Variety.
And yet, the coronation coverage found an audience of 85 million viewers in the US, according to the BBC.
One noteworthy aspect of the way the American networks packaged their coverage involved the inclusion of commercials. That had a profound effect on the way TV developed in Britain versus America, according to Doherty.
“When the coronation films were shown on American television, the networks naturally sold advertising,” Doherty said. “And the Brits were upset that cigarette commercials were in disrespectful proximity to Her Majesty. This helped reenforce the Brits in their view that TV should continue to be government sponsored and paid for by taxes on the TV set and turned them away from considering the commercial model for TV like ours.”
Although both Thompson and Doherty appreciate the growing power of digital media and acknowledge that TV’s days as principal storyteller are winding down, neither thinks Monday’s funeral will mark the end of the TV Era.

“I don’t think the Queen’s send off will mark the medium’s swan song,” Doherty said. “If something like 9/11 were to happen again we’d all go to our TVs—drawn to the simultaneity and universality of the collective experience and the hypnotic power of the bigger image.”
Thompson agreed: “I don’t think the funeral will be the last great global event of the television era,” he said. “But, alas, the great global TV events of the future will probably be disasters: an assassination, a terrorist attack, a deliberate or accidental nuclear event, a huge natural disaster, a pandemic, a coup in a major North American democracy—something everyone will have to watch.”
Source: Read Full Article