The 6-to-3 decision by the Supreme Court on Thursday that upheld voting restrictions in Arizona has effectively left voting rights advocates with a higher bar for bringing federal cases under the Voting Rights Act: proving discriminatory intent.

That burden is prompting civil rights and voting groups to recalibrate their approach to challenging in court the raft of new restrictions that Republican-controlled legislatures have passed this year in the aftermath of Donald J. Trump’s election loss in November. No longer, they say, can they count on the federal courts, including the Supreme Court, to serve as a backstop for preventing racially discriminatory voting restrictions.

“We have to remember that the Supreme Court is not going to save us — it’s not going to protect our democracy in these moments when it is most necessary that it does so,” Sam Spital, the director of litigation at the NAACP Legal Defense Fund, said Friday.

The high court gutted the central protection of the Voting Rights Act in a 2013 decision, and on Thursday the court further limited the act’s reach in combating discriminatory laws, establishing strict new guidelines for proving the laws’ effects on voters of color and thus requiring litigants to clear the much higher bar of proving purposeful intent to discriminate.

Mr. Spital said his group would have to carefully assess its next moves and “think very carefully” before bringing new cases that, if defeated, could set damaging new precedents. The Arizona case, filed in 2016 by the Democratic National Committee, was considered a weak vehicle for challenging new voting laws; even the Biden administration acknowledged that the Arizona law was not discriminatory under the Voting Rights Act. Choosing the wrong cases, in the wrong jurisdictions, could lead to further setbacks, Mr. Spital and other voting rights advocates said.

At the same time, Mr. Spital said, it is imperative that voting restrictions enacted by Republicans not go unchallenged.

“It will force us to work even harder in the cases that we do bring,” he said. “Once the rules of the game are set, even if they are tilted against us, we have the resources — we have extraordinary lawyers, extraordinary clients, and we have the facts on our side.”

Thursday’s ruling also laid bare an uncomfortable new reality for Democrats and voting activists: that under existing law, they can expect little help from the federal courts on election laws that are passed on a partisan basis by the party that controls a state government. Republican lawmakers in Georgia, Florida and Iowa have moved aggressively to push through voting laws, brushing aside protests from Democrats, voting rights groups and even major corporations.

Arizona Republicans were candid about the partisan nature of their efforts when the Supreme Court heard the case in March. A lawyer for the Arizona Republican Party told the justices that the restrictions were needed because without them, Republicans in the state would be “at a competitive disadvantage relative to Democrats.”

“It’s much harder to prove these things — it takes a lot more evidence,” said Travis Crum, a law professor at Washington University in St. Louis who specializes in voting rights and redistricting cases. “Courts are often reluctant to label legislators racist. That’s why the effects standard was added in 1982.”

The high court’s decision also raises the stakes for 2022 contests for governor in the key swing states of Michigan, Pennsylvania and Wisconsin, where Democratic governors are poised to block measures proposed by Republican-controlled legislatures. If a Republican won the governor’s seat in any of those states, the legislature would have a clear path to pushing through new voting laws.

Republicans on Friday lauded the Supreme Court ruling, calling it a validation of the need to combat voter fraud — though no evidence of widespread fraud emerged in President Biden’s victory.

Justin Riemer, the chief counsel at the Republican National Committee, argued that the new “guideposts” set by Justice Samuel Alito, who wrote the majority opinion, were welcome and would force a recognition of the broader options for voting available in a state.

“It reaffirms, for example, that states have an incredibly important interest in protecting against voter fraud and promoting voter confidence,” Mr. Riemer said. “When the court looked at Arizona’s laws, it noted how generous the voting provisions were.”

Mr. Riemer noted that Democrats would also have a harder time in meeting new standards for showing that laws impose unreasonable burdens on voters.

“I don’t want to say completely shuts them out of Section 2, but it’s going to make it very difficult for them to strike down laws that are really minimally, if at all, burdensome,” Mr. Riemer said, referring to the section of the Voting Rights Act that addresses racially discriminatory practices.

The first immediate test of a newly emboldened legislature will come next week in Texas, where lawmakers are scheduled to reconvene for a special session, in a second attempt by Republicans to pass an election overhaul bill. The first attempt failed after Democrats in the State Legislature staged a contentious late-night walkout, temporarily halting proposals that were among the most restrictive in the country.

Those proposals included bans on new methods of voting, a reduction in Sunday voting hours and provisions that would make it easier to overturn elections and would greatly empower partisan poll watchers.

The uncertain legal fights will play out in a federal judiciary remade during Mr. Trump’s administration, and Democrats in Congress have failed to enact federal voter protections.

The legal defense fund that Mr. Spital represents sued Georgia in May over its new voting laws, arguing that the laws would have a discriminatory effect. Other lawsuits, including one the Department of Justice filed last week, argue that Georgia acted with intent to discriminate against voters of color.

But some Democrats, while lamenting the decision by the Supreme Court, noted that they still had plenty of constitutional tools to challenge repressive voting laws.

“Obviously, it is now going to be more difficult to litigate,” said Aneesa McMillan, a deputy executive director at the super PAC Priorities USA, who oversees the organization’s voting rights efforts. “But most of our cases that we challenge, we challenge based on the First, the 14th and the 15th amendments of the Constitution.”

Among the guideposts Justice Alito articulated is an assessment of “the standard practice” of voting in 1982, when Section 2 of the Voting Rights Act was amended.

“It is relevant that in 1982 States typically required nearly all voters to cast their ballots in person on election day and allowed only narrow and tightly defined categories of voters to cast absentee ballots,” Justice Alito wrote. 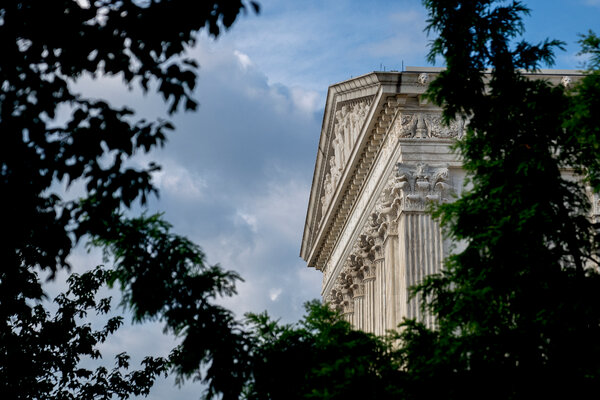 The court did not address the purpose clause of Section 2. But those cases often rely on racist statements by lawmakers or irregularities in the legislative process — trickier elements of a legal case to prove than the effects.

“You’re not going to get that smoking gun kind of evidence,” said Sophia Lakin, the deputy director of the A.C.L.U.’s Voting Rights Project. “It’s pulling together a lot of circumstantial pieces to show the purpose is to take away the rights of voters of color.”

In Texas, some Democrats in the Legislature had been hoping that they could work toward a more moderate version of the bill in the special session that starts next week; it remains to be seen whether the Supreme Court decision will induce Republicans to favor an even more restrictive bill.

But whether the Supreme Court decision will open the floodgates for more restrictive voting legislation in other states remains an open question; more than 30 state legislatures have adjourned for the year, and others have already passed their voting laws.

“It’s hard to imagine what a spike in voting restrictions would look like now, because we are already seeing such a dramatic surge, more than at any time since Reconstruction,” said Wendy Weiser, the director of the Democracy Program at the Brennan Center for Justice, a research institute. “But passing new waves of legislation has certainly been the response in recent years.”

Gov. Tony Evers of Wisconsin is one of the Democratic governors who are holding off voting measures passed by Republican-led legislatures. On Wednesday, he vetoed the first of several pieces of Republican legislation on the electoral process.

In an interview, he said Republicans’ monthslong effort to relitigate the 2020 election had had the effect of placing voting rights on the level of health care and education among the top priorities of Wisconsin voters.

“It's rising up as far as people’s recognizing that its an important issue,” Mr. Evers said. “They brought it on themselves, frankly, the Republicans have. I don’t think the people of Wisconsin thought the election was stolen. They understand that it was a fair election. And so the Republicans’ inability to accept Donald Trump’s loss is making it more of a bread-and-butter issue here.”