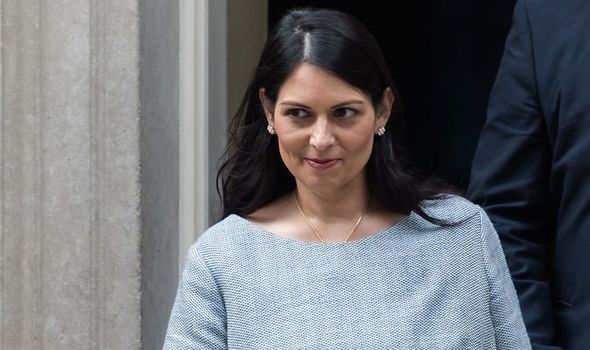 The Home Secretary said officers will have new powers to arrest “selfish” demonstrators causing disruption. It comes after campaigners caused mayhem by blocking the M25 this week.

Ms Patel said the “dangerous” tactics used by environmental campaign group Insulate Britain take police away from communities where they are needed most.

The Home Secretary said: “This Government will not stand by and allow a small minority of selfish protesters to cause significant disruption to the lives and livelihoods of the hard-working majority.

“The guerrilla tactics used by Insulate Britain detract from their cause and I know the public will agree that the scenes on the M25 this week were completely unacceptable.

“The police have our full support.

They must uphold the law and take decisive action.This kind of disruption is dangerous and takes police away from communities where they are needed most.

“That’s exactly why we are giving police the powers to better manage such highly disruptive demonstrations in future. The Police, Crime, Sentencing and Courts Bill will introduce a new offence of public nuisance, ensuring there are appropriate sentences for the harm caused.”

Activists from Insulate Britain have pledged to stage a third protest on the UK’s busiest motorway “as soon as possible”.

Some 89 campaigners brought traffic to a standstill for hours on Wednesday – two days after sparking chaos during a rush-hour blockade on Monday.

Some even glued their hands to the road in the Dartford Crossing area.

Police from Essex, Hertfordshire, Surrey and Kent made 200 arrests after the widespread chaos.

Three activists held for “orchestrating” the chaos have been released by police. They were a 55-year-old man from Walworth, south London, a woman of 45, in Milton Keynes, Bucks, and, a 49-year-old man in Torquay, Devon.

Insulate Britain, an off-shoot of Extinction Rebellion, are demanding Boris Johnson pays for all social housing to be fully insulated.

In a statement, it said: “People from Insulate Britain involved in blocking the M25 on Wednesday and released from custody this morning told the police that they would repeat the protest as soon as possible.”

Meanwhile, Ms Patel headed to Dover as migrants continued to make the perilous journey across the Channel. The Home Secretary held meetings with Border Force officials on the front line. She is battling to stop human traffickers exploiting weaknesses on the French frontier to send people over in small boats.

A record was set for the year so far when 1,959 people crossed the Channel from France in the week to September 10 – the highest total for any seven-day period in 2021.

At least 14,400 people have crossed to the UK on small boats this year.The total for 2021 so far is already 6,000 higher than the whole of 2020. The Government has warned it may turn back boats that make the crossing.