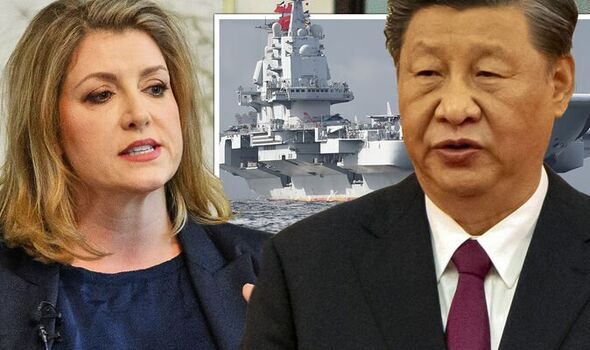 Ms Mordaunt came second in the poll of MPs today with 92 votes but was just six ahead of a resurgent Foreign Secretary Liz Truss who is now favourite to grab the coveted second spot behind Rishi Sunak. It is widely expected that most of the mostly right-wing 59 votes which went to Kemi Badenoch will now go to the Foreign Secretary who is seen as the Brexiteer champion.

But in a bold move tonight, Ms Mordaunt has defied her critics, including former Brexit minister Lord Frost, who suggested that she would not be able to face down international opponents.

In a policy statement that takes on both Ms Truss and Mr Sunak, the trade minister has made it clear that they both have overseen a policy towards China which has been too soft.

It is one last twist in a bitter contest which has seen claim and counter claim thrown at the rivals.

A briefing exclusively shared with Express.co.uk, said that Ms Mordaunt is calling for a complete change in our relationship with China.

It noted: “The current Government has been too soft on China, prioritising economic relations over national security and human rights.”

Ms Mordaunt believes this “is not tenable given the gross human rights abuses in Xinjiang, breaking of the Joint Declaration in Hong Kong, and the aggression of China towards Taiwan.”

In a new hawkish policy she will pledge to conduct a full review of UK-China policy, across all Government departments, with a view to a re-set in policy and a new Government strategy.

Under her the Government will not just have a China Strategy it must have a vision for the Indo Pacific and both must be understood by Ministers.

She also will make it clear that Britain should not let our trade ambitions with other nations be hampered or diluted by China’s views.

In addition, she will ensure the UK places sanctions on those responsible for the repression and diminution of rights in Hong Kong.

Ms Mordaunt will also ensure the UK places additional sanctions on the most senior officials responsible for the human rights abuses in Xinjiang.

A source close to her said: “We have not gone far enough in this area, nor sanctioned the most senior Chinese officials responsible.”

There will also be a prohibition on UK firms and public sector bodies from conducting business with, investing in, or entering into partnerships with Chinese firms aiding the human rights abuses in Xinjiang, especially technology companies, to ensure that UK companies do not provide either support or financing for further technology-enabled human rights abuses.

This follows concerns about the way British universities in particular have pursued funding from the Chinese Communist Party regime.

There will also be a pledge to monitor China’s plans with regards to soft infrastructure and services such as customs and airport handling.

The new policy will possibly make supporters of former leadership candidate Tom Tugendhat think twice about where they vote.

As chairman of the Foreign Affairs Committee and founder of the China Research Group he has pushed for a much tougher policy on China.

However, it is also a direct criticism of Ms Truss who as Foreign Secretary has, in the eyes of many Tory MPs, failed to properly stand up to Beijing.

However, sources have also made it clear that it is also an indirect attack on former Chancellor Rishi Sunak who was directly challenged on his attitude to China in the leaders’ debate on Sunday.

An article by the US-based National Pulse being shared by MPs has called him “China’s candidate” because of his father-in-law’s business links.

However, Mr Sunak’s team have hit back at the accusations.

A campaign spokeswoman said: “Rishi is unambiguous about China. He will stand up to the Chinese state whenever it threatens our national security and will challenge their contravention of British values in the strongest terms.

“As Prime Minister, his overriding priority will be the security of our country.”

Sources also pointed out that before his career in Government, Rishi undertook extensive work on threats to UK security.

He wrote a seminal report in 2017 on the vital need to protect the internet infrastructure provided by undersea cables.