Home » Politics » Pelosi regains gavel as speaker of most diverse U.S. House ever

Pelosi regains gavel as speaker of most diverse U.S. House ever

WASHINGTON (Reuters) – Nancy Pelosi again became the most powerful woman in American politics on Thursday, gathering dozens of children around her as she took the oath of office as the next speaker of a diverse and deeply divided U.S. House of Representatives.

Blowing a kiss to senior Republican Representative Don Young after he read out the oath to her, the California Democrat assumed the leadership of the 435-seat chamber at a moment of unique instability and uncertainty.

As the Democratic speaker, Pelosi will oversee a sweeping series of investigations of Republican Donald Trump, his business interests and the first two years of his presidency, while pursuing a distinctly Democratic legislative agenda.

Her first order of business will be to pass legislation on Thursday evening that would reopen the federal government, which is in the midst of a 13-day partial shutdown. The bill was expected to die, however, in the Senate, still controlled by Republicans.

“Building an economy that gives all Americans the tools they need to succeed in the 21st Century: public education, workforce development, good-paying jobs and secure pensions,” Pelosi said of her aims.

Regaining the speaker’s gavel eight years after losing it, Pelosi remains the only woman ever to occupy the post. She will preside over the most diverse House membership in history, including a record number of women and Latinos, with her party having wrested majority control from Trump’s Republicans in the November elections in a landslide victory.

The diversity of her party’s caucus was on full display during the hour-long vote to elect her as speaker.

“Standing on the shoulders of the women who marched 100 years ago to give me the right to vote, I cast my vote for Nancy Pelosi,” Representative Brenda Lawrence declared on the floor.

In the middle of the floor, Representative Eric Swalwell rocked his infant daughter, Cricket, when Representative Ilhan Omar, one of the first two Muslim women elected to Congress, stopped by to take a turn holding the baby.

For a moment, the focus on the House floor shifted when Pelosi was called on to vote for herself and granddaughter Bella Pelosi Kaufman grabbed her arm and jumped up and down.

The election of Pelosi, 78, was only briefly in doubt late last year amid a rebellion by some in the Democratic ranks who said the time had come for new leadership.

But she quelled the insurrection and won 220 votes. Only 15 Democrats opposed her – a smaller factional breakaway than Republicans saw for their two prior speakers.

Representative Hakeem Jeffries, whom she brought into the House leadership as the new House Democratic Caucus chairman, drummed up the most enthusiasm for her before the voting. 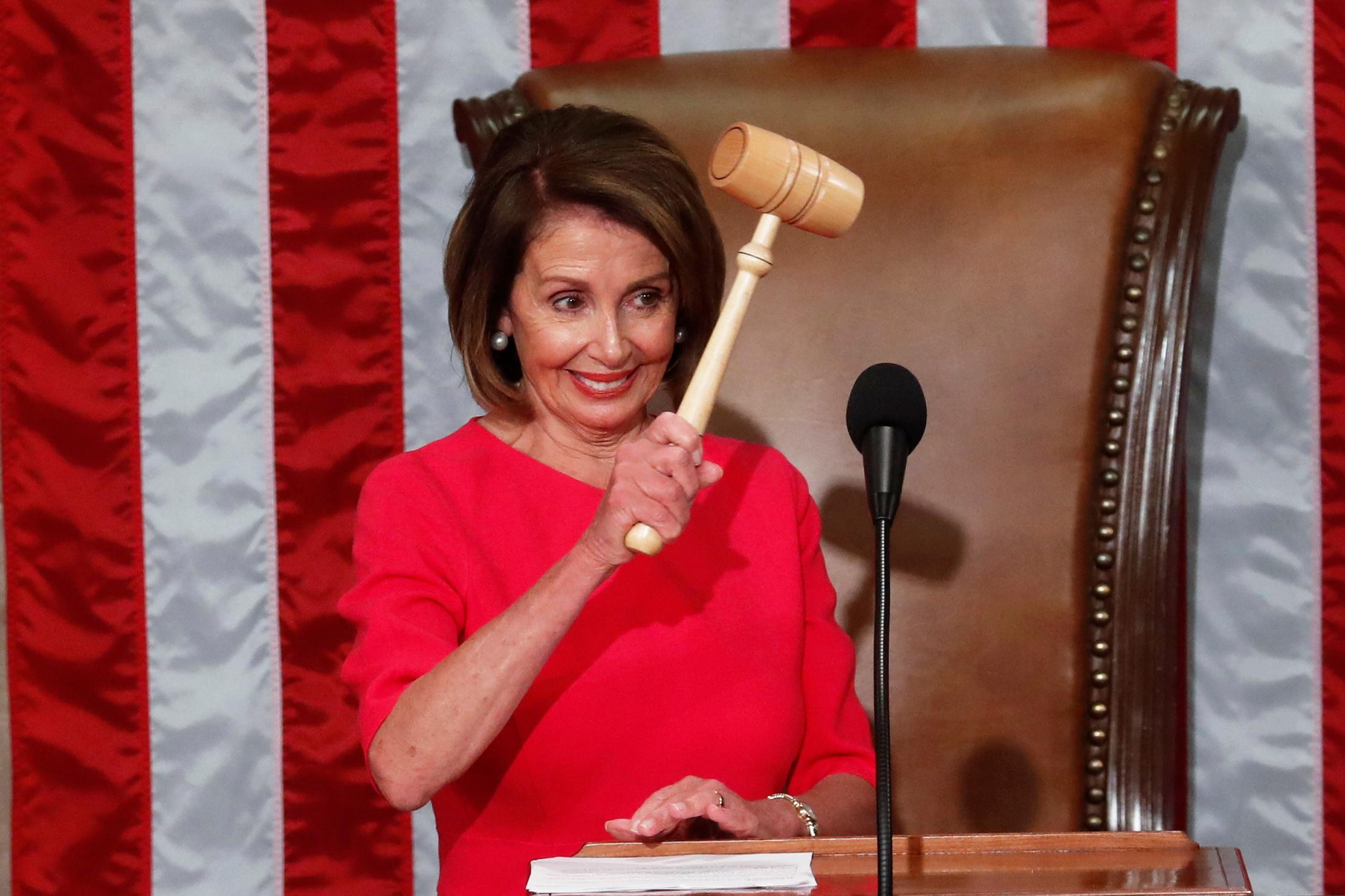 “Nancy Pelosi is a woman of faith, a loving wife, a mother of five, a grandmother of nine, a sophisticated strategist, a legendary legislator, a voice for the voiceless,” said Jeffries.

In a reference to a 1991 rap song by Naughty by Nature, Jeffries added: “Let me be clear, House Democrats are down with NDP – Nancy D’Alesandro Pelosi, the once and future speaker of the House of Representatives.”