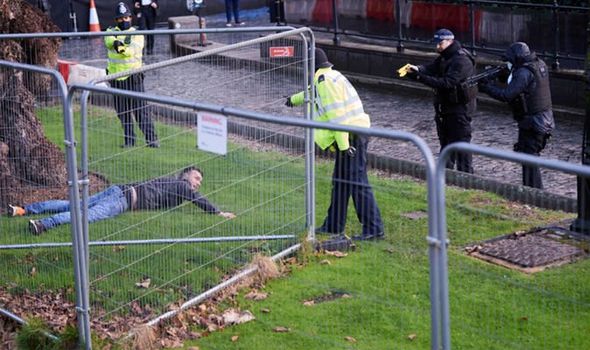 One of the main entrances to the Palace of Westminster has been sealed off after the man gained access to the grounds of the historic building.

Police were deployed to New Palace Yard, inside Parliament’s secure compound, and shut off the Carriage Gates entrance, where ministerial cars enter the estate.

Prime Minister Boris Johnson and most of his front bench used the entrance earlier today to arrive at the Commons for PMQs at midday.

A Met Police spokesman said: “At around 15:00hrs on Wednesday, 1 December, a man was detained and arrested at Carriage Gates inside the Palace of Westminster on suspicion of trespassing on a protected site. Enquiries into the circumstances continue.”

The suspect was screaming, demanding a lawyer as he was carried away by police.

A House of Commons spokesperson said: “We are aware of an incident on the Parliamentary estate which is being attended by police and security staff.”

The incident is not being treated as terrorist-related.

Carriage Gates were breached in 2017 when an Islamic extremist crashed into the railings outside the Place cordon and entered on foot.

Khalid Masood killed PC Keith Palmer with a knife as he attempted to enter Parliament.

In the same attack he killed three others and injured 50 more by mounting his car on the pavement on Westminster Bridge.