Students getting ‘indoctrinated with no parent notification’: Parent of high school student

A parent of a high school student took issue with “critical race theory” being integrated into classrooms and children being turned into activists instead of being taught to think.

“This is a tragedy of ideology called critical race theory. We need to challenge any kind of racism and discrimination that exists in our country. We all agree on that. What happened to this ideology is creating a new hierarchy of human values,” parent and former Wall Street Journal reporter Asra Nomani told “America’s Newsroom” on Thursday.

TUCKER CARLSON: THE FAR-LEFT AGENDA YOUR CHILDREN ARE BEING TAUGHT EVERY DAY

Nomani doubled down on an op-ed she wrote for “The Federalist” in which she explained the content of an instructional material a student at Thomas Jefferson High School for Science and Technology in Alexandria, Virginia sent his parent.

She wrote that the boy sent his “mother distressing videos from a mandatory lesson straight out of controversial critical race theory.” The content was connected to “socio-emotional learning.”

Nomani wrote, “The lesson centered a Netflix film, ’13th,’ with controversial activist and Communist Party member Angela Davis and a biased narrative about policing in the United States. While all discrimination must be eliminated in policing, the film has this odd takeaway: ‘Criminals are constitutionally deprived of freedom.'” 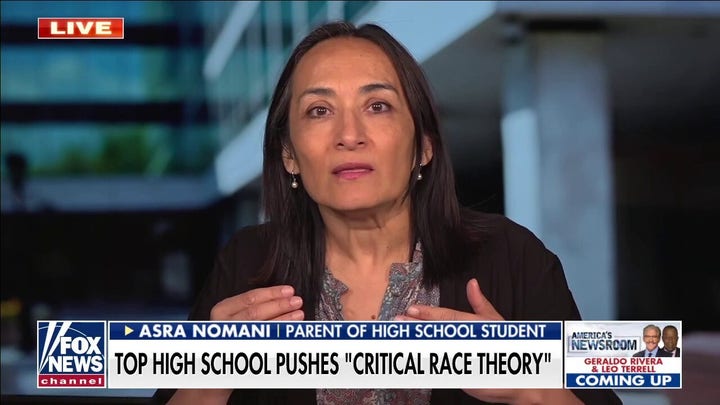 “For about 36 minutes, teachers lectured the students—who are about 70 percent Asian, 10 percent Black, Hispanic, and multiracial, and 20 percent white—about the critical race theory concept of “intersectionality” and called out the mostly minority students of color for their alleged “racism,” stating without any evidence: “At T.J., the lack of diversity and informed students has perpetuated microaggressions and casual racism,” she wrote.

“In a videotaped message accompanying the lesson, Anant Das, an alumnus from the local activist TJ Alumni Action Group, scolded the students for salsa dancing at an international night celebration, which he called cultural ‘appropriation.’ Teachers also led a bizarre discussion on “what stereotypes might you have about your own culture. They pushed activism, stating: “Ways to address racism can include being upfront and vocal or pushing for social change through your own actions. The ‘Extra Resources’ included a reference to “Black Lives Matter,” with a link to the official website for the Black Lives Matter Global Network Foundation.”

Nomani explained to “America’s Newsroom” anchors Bill Hemmer and Dana Perino that “Asians” are now “being bucketed as white adjacent.”

“We’re an inconvenient minority. They then bring it into the classroom,” Normani said.

Nomani described one of the materials in the lesson plan being a “color book” that engages students in discussing the “Black Lives Matter” movement.

She said schools are “putting the ideology into kids’ minds so they can create activists.”

“Not thinkers but activists. We’re not caring about the welfare of the children. We have to fight back. This is not about taking care of our children but this is about turning them into activists.”