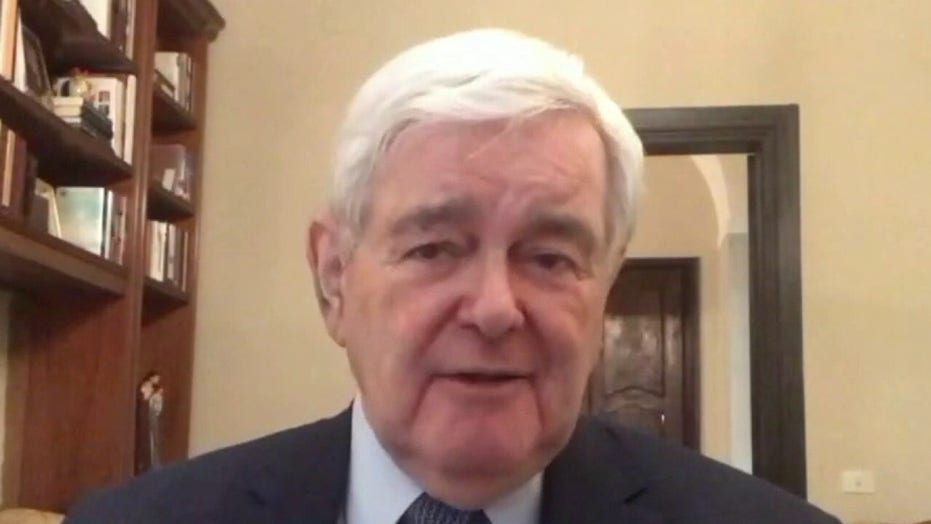 Trump to campaign in Georgia for Perdue, Loeffler in Senate runoffs

Fox News contributor Newt Gingrich previews President Trump’s trip to Georgia to campaign for Sens. David Perdue and Kelly Loeffler and analyzes how it has gone from GOP stronghold to swing state.

On "Fox & Friends," Gingrich noted President Trump received a higher Black and Latino vote in the 2020 presidential election than in 2016 and that shift could play into who wins the Georgia races that will determine party control of the Senate this year.

"The Republican Party has consistently been doing better because, again, people who are earning a living, working hard tend to have an increasing bias towards us and towards lower taxes," Gingrich said.

"And you’ve had some two dozen African-American pastors come out and attack Raphael Warnock for being so rabidly pro-abortion and so willing to use tax money to pay for abortion. So there are values issues there, too. And I think that you’ll find that we do better or continue to do better with Asian, Latino, and African-American votes as it becomes obvious how radical, how high tax and, frankly, how high-unemployment the Democrats are."

Gingrich, who represented Georgia's Sixth District in suburban Atlanta while in Congress, explained the phenomenon of minorities moving to the suburbs in recent years. Former Republican strongholds like Cobb County and Gwinnett County have grown steadily bluer as a result, while rural Georgia has become more Republican.

"Well, it’s a fascinating demographic. What basically happened is that strong Republican voters have moved further and further out to small towns and communities like Dalton or like Rome, like Gainesville," Gingrich told.

"And at the same time, people who were crammed into the center of Atlanta have, as they’ve gotten wealthy, I mean, one of the great virtues of the Trump economy was the lowest black unemployment rate in history. Well, as people get more money, they like to move to the suburbs which is perfectly normal," Gingrich said.

LOEFFLER'S WARNING BEFORE GEORGIA RUNOFFS: 'WE WON'T GET A SECOND CHANCE'

Meanwhile, Sen. Kelly Loeffler, R-Ga., warned that Democratic victories in her state's runoff elections will mean a radical agenda that will drastically change life in the U.S.

Both Georgia Senate seats – and control of the chamber – will be up for grabs on Tuesday as Loeffler faces Warnock and Sen. David Perdue, R-Ga., takes on Jon Ossoff. With Democrats already having control of the House and the White House after November's election, Loeffler told "Fox News Sunday" that Democratic victories this week would result in drastic changes in Washington.

"It's a choice, it's a stark contrast between the freedoms — our way of life here in Georgia — or socialism, government control," she said. "We know the agenda of the left because Chuck Schumer told us he was going to take Georgia and then change America. And we know that radical agenda is not just high taxes, open borders, defunding the police, government-run health care, but he has radical candidates in this race, his agents of change."

One of those "agents of change," Loeffler claimed, is her opponent Warnock, who she said did not represent her state's values and who would "fundamentally change this country."

President-elect Joe Biden was the first Democrat in 28 years to win Georgia in a presidential race, although Republicans in both U.S. Senate races, including the "jungle" race for Loeffler's seat with nearly two-dozen competitors, won more votes than their Democratic counterparts in November. No one cracked the 50-percent threshold, however, forcing runoffs in both contests.