House Speaker Nancy Pelosi, D-Calif., traveled to Rome over the weekend to meet with Pope Francis amid an ongoing debate over abortion in America.

According to a tweet from Pelosi’s account, the meeting, which took place Saturday at the Vatican among a private audience, was a “spiritual, personal and official honor.”

Pelosi, a Catholic who has faced criticism for her views on abortion, has maintained over the last few years that she believes the procedure is part of a woman’s right to choose.

Last month, Archbishop Salvatore Cordileone of San Francisco, called for a “massive and visible campaign of prayer and fasting” for the conversion of Pelosi’s heart following the passage of HR 3755, which, according to him, would “impose abortion on demand nationwide at any stage of pregnancy.” 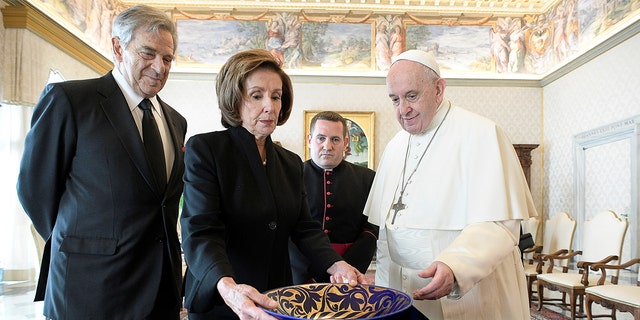 U.S. Speaker of the House Nancy Pelosi and her husband Paul Pelosi meet with Pope Francis at the Vatican Oct. 9, 2021.

“A conversion of heart of the majority of our congressional representatives is needed on this issue, beginning with the leader of the House, Speaker Nancy Pelosi,” Cordileone said in a statement. “I am therefore inviting all Catholics to join in a massive and visible campaign of prayer and fasting for Speaker Pelosi: commit to praying one rosary a week and fasting on Fridays for her conversion of heart.”

Cordileone’s statement came amid a raging abortion debate, which gained steam this month when the Supreme Court allowed Texas to implement its heartbeat bill. The return of a conservative majority to the Supreme Court has also prompted discussion about Congress codifying Roe v. Wade in case it’s overturned. 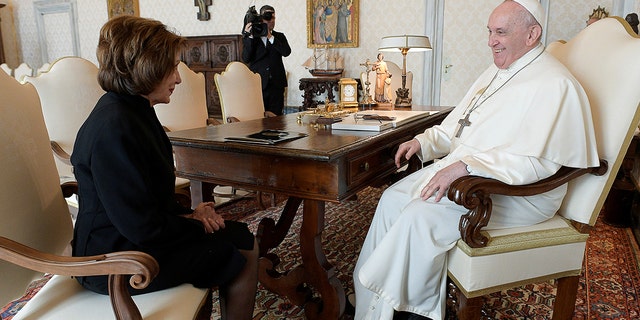 Pope Francis speaks with U.S. Speaker of the House Nancy Pelosi as they meet at the Vatican, Oct. 9, 2021.

“The archbishop of the city of that area, of San Francisco, and I had a disagreement about who should decide this [family size and timing],” she said. “I believe that God has given us a free will to honor our responsibilities.”

The Catholic Catechism teaches that humans ought to use their free will to reject sin, and Catholics consider abortion a sin. 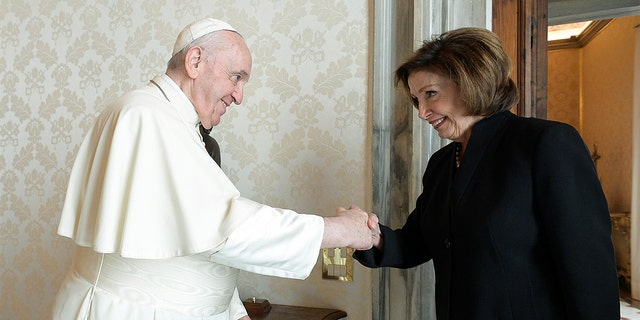 Pope Francis reacts as he meets with U.S. Speaker of the House Nancy Pelosi at the Vatican Oct. 9, 2021.

The section of the Catechism discussing abortion says the procedure and infanticide “are abominable crimes.”

It states, “The inalienable rights of the person must be recognized and respected by civil society and the political authority.” The Catechism also warns that “when the state does not place its power at the service of the rights of each citizen and, in particular, of the more vulnerable, the very foundations of a state based on law are undermined.” 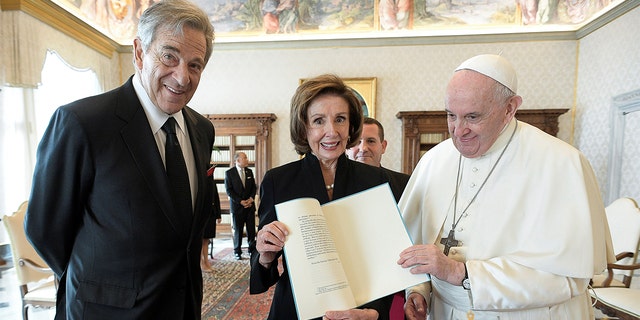 U.S. Speaker of the House Nancy Pelosi and her husband Paul Pelosi meet with Pope Francis at the Vatican, Oct. 9, 2021.

While discussing abortion, Pelosi has also said it is “none of our business how other people choose the size and timing of their families.”

Over the summer, Cordileone insisted Pelosi and other self-professed Catholics cannot “claim to be a devout Catholic and condone the killing of innocent human life, let alone have the government pay for it.”

Pelosi has also expressed support for eliminating the Hyde Amendment, a federal policy in place since 1976 prohibiting most abortions from being funded through Medicaid.