In a Twitter thread reflecting on the attacks, the economist and Nobel laureate claimed that America “took 9/11 pretty calmly.”

“Notably, there wasn’t a mass outbreak of anti-Muslim sentiment and violence, which could all too easily have happened,” Krugman wrote. 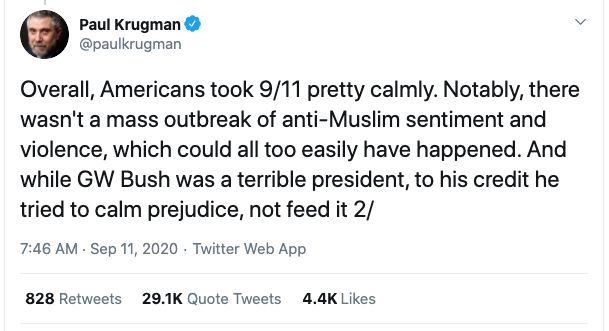 Krugman also contended that Americans’ daily behaviors weren’t drastically affected by the attacks ― noting that he and his wife were able to fly to a vacation destination months later.

“True, for a while people were afraid to fly: my wife and I took a lovely trip to the U.S. Virgin Islands a couple of months later, because air fares and hotel rooms were so cheap,” he wrote. “But life returned to normal fairly fast.”

Muslim Americans swiftly responded by reminding Krugman about the backlash experienced by their communities in the aftermath of the attacks.

Krugman’s publicity team did not immediately respond to a HuffPost request for comment.

Muslim communities were subjected to illegal and targeted surveillance by law enforcement. Mosques were and continue to be vandalized, burned, and bombed. While Krugman appears to have returned to flying easily, Muslim Americans report still being unfairly profiled and detained at airports.

Then-presidential candidate Donald Trump fanned the flames of anti-Muslim sentiment in 2015 by calling for a “complete shutdown” of Muslims entering the U.S. ― a threat he partially followed through on by targeting Muslim immigrants and refugees in an executive order on entry to the country he issued days after he became president.

The Sept. 11 attacks also sparked new forms of activism and advocacy in Muslim and other communities, including the organization of national civil rights groups and increased interfaith outreach. 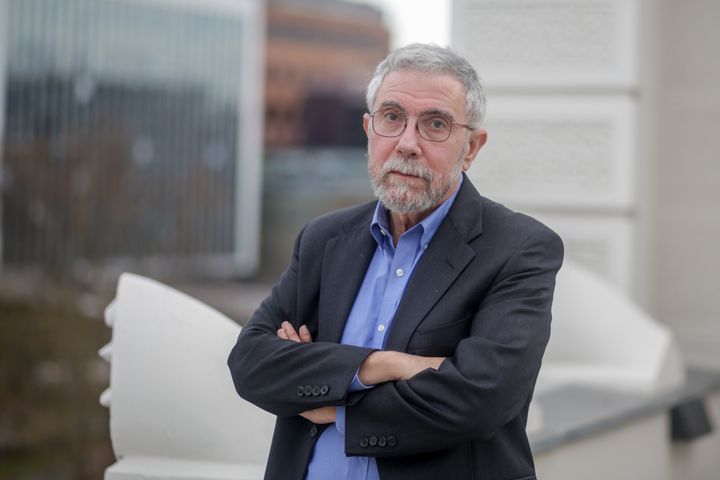 Krugman’s tweets came “from a place of ignorance and privilege,” according to Scott Simpson, public advocacy director for Muslim Advocates, a civil rights group founded in response to 9/11. He told HuffPost that the tweets were also a reminder that “liberals who ostensibly support the rights of American Muslims can also be disturbingly dismissive of their lives and basic dignity.”

The 9/11 attacks are a “delicate and traumatic time for Muslims,” Simpson said. He recalled how some Muslims “draped themselves in the flag and even changed their names out of fear.”

“This is a very real pain that Muslims still feel today,” he said.“And with a presidential election looming, we’re seeing more bigoted opportunists than usual try and use this day as a way to stir up anti-Muslim hate.”

The Sikh Coalition is another advocacy group founded in the wake of Sept. 11. The first American slain in the backlash was a Sikh,  Balbir Singh Sodhi, who was murdered outside of his gas station in Arizona four days after the attacks by a man who said he wanted to “kill a Muslim” in retaliation.

Bullies at schools and assailants in hate crimes still use slurs related to 9/11 in their harassment of Sikh Americans, coalition’s Executive Director Satjeet Kaur told HuffPost.

“I mean, 15 years later, at a Sikh-related portrait gallery event in (New York City)  we still had people shouting ‘Osama!’ as they went by,” Kaur said, referring to Osama bin Laden, the mastermind of the attacks in which almost 3,000 people died.

“No community deserves this kind of hate, and it’s frankly irresponsible to pretend it didn’t happen or minimize it,” she added.

For many Americans, life never returned to “normal” after 9/11, Kaur said ― especially those who lost loved ones in the attacks or were affected by the subsequent wars the U.S. pursued in Afghanistan and Iraq.

“It was a profound moment of national trauma, and it certainly feels like we’re still healing from that as we remember those who were lost,” Kaur said. “And then for Sikhs, Muslims and others, there is the added component of remembrance and grieving for all those who faced discrimination, injury, and even death in the days, weeks, months, and years afterward due to the backlash.”