MPs have rejected a Labour motion calling for an extension of free school meals over the school holidays until Easter 2021.

Ministers have so far rejected calls to extend the provision of free school meals in England over the half-term and Christmas breaks, despite coming under pressure.

Manchester United and England footballer Marcus Rashford has been leading a campaign on the issue and was recently given an MBE in recognition.

He wants them expanded to all school holidays, and also given to anyone who gets Universal Credit or equivalent.

Before the vote, he warned MPs not to “turn a blind eye” to vulnerable families and said he would be “paying close attention” to the outcome.

Reacting to the motion’s defeat, he said in a statement on Twitter: “Put aside all the noise, the digs, the party politics and let’s focus on the reality.

“A significant number of children are going to bed tonight not only hungry but feeling like they do not matter because of comments that have been made today.

“We must stop stigmatising, judging and pointing fingers. Our views are being clouded by political affiliation.

“This is not politics, this is humanity.”

Rashford promised to continue campaigning, adding: “For as long as they don’t have a voice, they will have mine.”

Labour’s shadow education secretary, Kate Green, said the government had “badly let down more than one million children and their families”.

She added: “No child should go hungry over the holidays, but the government is blocking the action needed to prevent this.

“We pay tribute to Marcus Rashford and others for shining a spotlight on this incredibly important issue.

“This campaign is not over and the government must reconsider.”

Facing MPs in the Commons earlier, Boris Johnson resisted calls for a change in approach.

“We support kids on low incomes in school and we will continue to do so,” he said during Prime Minister’s Questions. 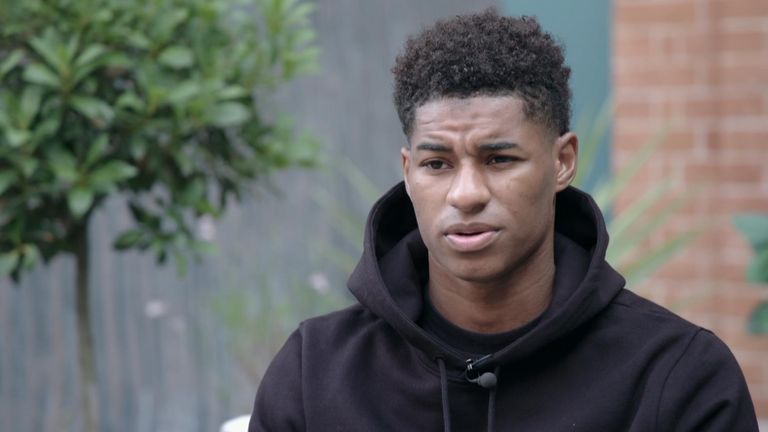 “But the most important thing is to keep them in school and not tear off into another national lockdown taking them out of school.

“We will continue to use the benefits system and all the systems of income to support children throughout the holidays as well.”

And a Number 10 spokesman said: “While schools continue to play an integral role in the community, it’s not for them to regularly provide food during school holidays.”

A government spokesman said before the vote: “We have been giving substantial support to families and children, by providing free school meals when schools were partially closed, increasing welfare support by £9.3bn, and giving councils £63m for families facing financial difficulties.

“We also provided vouchers through the COVID Summer Food Fund, in addition to the Holiday Activities and Food Programme.

“Now that the vast majority of pupils are back in school and over 99% of schools have been open every week since term began, kitchens are able to provide healthy, nutritious meals to all children, including those eligible for free school meals.”