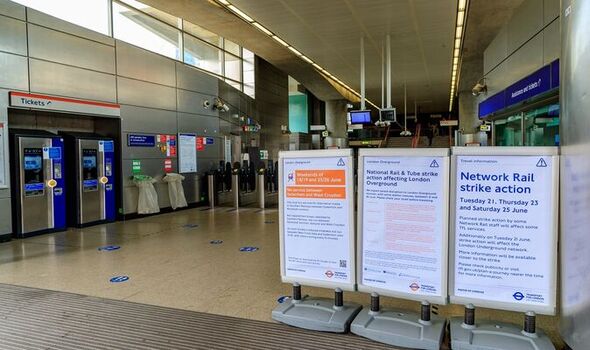 Travellers face misery when Network Rail and 13 train operators are hit with strikes on Tuesday, Thursday and Saturday – with the London Underground affected on Tuesday. But confirmation of the strikes came as new polling showed more than half of British people think it is “unreasonable” for rail union bosses to push for doubledigit pay rises.

Mr Shapps warned of the impact on workers, children due to sit exams and people who need to get to medical appointments.

He said: “We are on the cusp of major disruption which will cause misery for people right across the country.

“By carrying out this action the RMT is punishing millions of innocent people.”

Lynch defended the decision, saying: “It has to be restated that the source of these disputes is the decision by the Tory Government to cut £4billion of funding from our transport systems.”

But a spokesperson for the Department for Transport said: “The Government committed £16billion [to] keep our railways running throughout the pandemic while ensuring not a single worker lost their job.”

Polling by YouGov for industry body, the Rail Delivery Group found 52 percent of people thought a doubledigit pay rise was “unreasonable” and 57 percent said it would “not be affordable”.

Just 25 percent supported the strike while 39 percent did not.

The Rail Delivery Group claims the strike days will “cover the busiest week for rail since the pandemic with two by-elections, the Glastonbury festival, athletics championships in Manchester and concerts in London’s Hyde Park by Elton John and the Rolling Stones”.

Steve Montgomery, the Rail Delivery Group chairman, said: “Instead of striking, we need the RMT leadership to work with us to secure a deal that is fair to our staff, fair to passengers and fair to taxpayers.”

Labour leader Sir Keir Starmer said: “Like the public, I am frustrated because the Government is sitting it out. It’s not lifting a finger to resolve these strikes.”