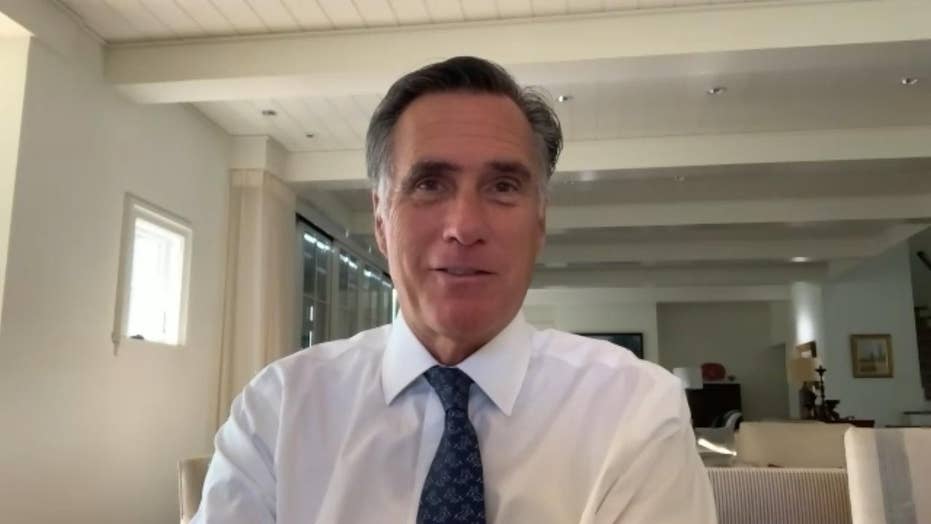 Sen. Mitt Romney shares his Big Idea speaking about the TRUST Act. The bill would set up commissions to address each trust fund.

The Big Idea is a series that asks top lawmakers and figures to discuss their moonshot — what’s the one proposal, if politics and polls and even price tag were not an issue, they’d implement to change the country for the better?

Lawmakers and watchdogs for years have warned about the deteriorating state of the Medicare and Social Security trust funds, leading intermittent attempts to reform them – including during the Obama administration with the Simpson-Bowles Commission and during former President George W. Bush's second term.

But, given how popular the programs are in their current form and their status as third-rail issues in American politics, those efforts have largely failed, allowing the programs to continue depleting their trust funds at a higher rate than money is coming in, putting benefits at risk for many middle-aged and younger Americans.

Projections vary, but for the most part, the Social Security trust fund is projected to run out in the middle of the next decade, and the Medicare trust fund at some point this decade. In response to this problem — and grumblings within the Senate Republican caucus about the projected price of the next round of coronavirus stimulus — Senate Majority Leader Mitch McConnell, R-Ky., included a bill spearheaded by Sen. Mitt Romney, R-Utah, in Republicans' most recent coronavirus proposal. 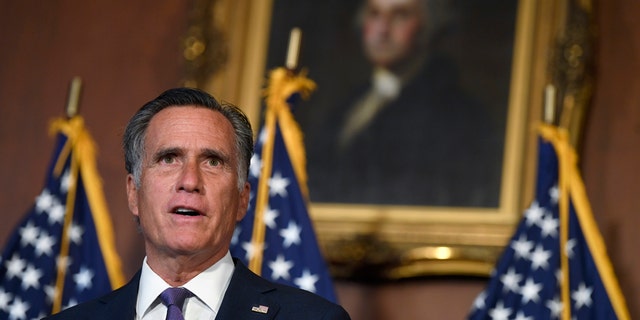 Sen. Mitt Romney, R-Utah, speaks during a news conference on Capitol Hill in Washington, Monday, July 27, 2020, to highlight the Republican proposal for the next coronavirus stimulus bill. The TRUST Act, which Romney is the lead sponsor of, was part of the GOP proposal, but talks have now stalled with both the House and Senate out of session until September. (AP Photo/Susan Walsh)
(Associated Press)

That bill, called the Time to Rescue United States Trusts Act, or TRUST Act, would create special bipartisan committees to craft legislation aimed at preserving the fiscal health of the Social Security, Medicare and highway trust funds run by the government.

The bills reported out of those committees would then receive fast-track votes in the House of Representatives and the Senate, meaning lawmakers could not amend them before the votes, in theory making them less susceptible to a "poison pill" amendment and more likely to make it to the president's desk.

Romney discussed his big idea with Fox News. This interview has been lightly edited.

Q: What is your big idea?

Romney: We have several trusts in the country. One is the Social Security disability trust. There's another Social Security trust for seniors, for old age. There is a Medicare trust fund that pays for Medicare. There's a highway trust fund. And so these trust funds are all projected to expire within a decade or so, in some cases just within two or three years.

So in order to avoid a dramatic reduction in benefits for these programs, we need to take action now to make sure that we save them and we assure their long term solvency. So the TRUST Act sets up a bipartisan commission for each one of the trusts. And the plan is that for Republicans and Democrats coming together, if we can come up with a solution to keep these trusts solvent, then we will vote on that on an expedited basis and finally get them on a secure financial basis, so we never have to worry about a reduction of benefits for Social Security — either Social Security disability or old age — or Medicare or our highway trust funds.

Q: Just how bad is the funds' fiscal condition?

Romney: Medicare, for instance, the trust is projected to run out within three to four years. Social Security looks like about 12 years. And in the case, for instance, of what happens when the Social Security trust fund is gone, which would happen in 10 to 12 years, under the law, that would result in approximately a 30% reduction of benefits.

So that's unacceptable. That cannot happen. So we need to take action to make sure that enough revenue is coming into these trusts and enough funding is coming out such that they become in balance long term so that we don't have to worry about ever seeing a reduction in benefits for any current retiree.

Q: How would the TRUST Act committees work?

Romney: Each one of the trust funds would have a separate super-committee or rescue committee set up to evaluate different proposals to get them solvent.

And so you'd have an equal number of Republicans and Democrats, six each. Three would come from the House. Three would come from the Senate. Again, from each party. They would work through hearings and a public discussion to see if they can't come up with a bipartisan solution with obviously some things that Democrats want and some things Republicans want, would be my guess.

If they can come up with a solution which has bipartisan support within the group of 12, then that would go to the floor of the House and the Senate for an expedited vote, meaning without amendment. And if that passes, then we would have been able to extend the solvency of Social Security, Medicare and/or the Highway Trust Fund.

Q: Why go through the extra step of these committees instead of just writing a bill?

And in our system of government, it takes both parties to come together to actually pass a law. And so experience has taught us that when a small group comes together and works very hard, studies something intently and works on a very focused basis, they often come up with a proposal that works for both parties. That, if you will, accepts the best of both, adheres to the principles that both parties believe are important and on that basis, comes up with an idea which then can go for a vote.

What often happens instead is that one party or another puts something on the floor. It's unsuccessful. Amendments are placed upon it, which make it poisoned by a poison pill, if you will, from an amendment. And so the thought is, instead of just kicking the can down the road, as we've been doing for many, many years, let's see if we can't come together and come up with a solution that preserves the integrity of the Social Security, Medicare and our highway trust funds.

Q: Why is reform to Social Security and Medicare so controversial?

Romney: I think both parties have found it's really good political fodder to accuse the opposition of doing something to hurt Social Security or Medicare.

So anytime anyone even talks about those programs, why the knives come out and accusations are made that someone is trying to hurt Social Security or Medicare.

In this case, it's just the opposite. And by the way, this is supported both by Republicans and Democrats. Thirty Democrats in the House of Representatives signed a letter to Speaker Pelosi saying, 'please include this in the upcoming legislation.' Republicans as well have signed on. So this is a bipartisan effort with people saying, 'gosh, we've got to save these trust funds.'

And let me also note, the only way we're ever going to get to a balanced budget is if we do save these trust funds because our spending in Washington is out of control. And until we get these trust funds properly organized and financed, why we're going to keep on taking on an extra trillion dollars a year in debt.

Q: This bill has been accused of being a 'backdoor cut' to these programs and of moving negotiations behind closed doors. How do you respond to that?

And I can assure you, there is no way the Democrats or the Republicans are going to vote for cuts to people who are on Social Security or Medicare. This is not going to happen. Neither party wants that to happen.

What we're looking at is what has to be done down the road to make sure there's enough revenue coming in to assure that the young people that are going to rely on Social Security and Medicare 20, 30, 40 years from now actually have a program that solvent and that can provide the benefits which are being promised today.

Q: What are a couple of proposals you think the committees should consider if the TRUST Act passes?

Romney: I don't want to by any means tie the hands of the committee members, the 12 that would be on each subcommittee. So I can't say precisely what they would come up with.

But our Democrat friends suggest, for instance, that we should be increasing the income upon which people's taxes are paid so that we get more money coming in through tax increases, if you will, for both Medicare as well as Social Security. Some conservative commentators have said we're going to need to make sure the retirement age for both programs is the same, and that would raise the retirement age and Social Security to that which exists in Medicare. And there's also been a suggestion that higher-income individuals would not receive as high payments under Social Security as do lower-income people.

Again, this is not for any current retiree. This will only be for people who are, let's say, 30 or 40 years old. So those are the kinds of things that have been discussed. But by the way, nothing would be approved unless both parties, Republicans and Democrats, agreed. So you recognize this is not going to be something that's forced through by either Republicans or by Democrats. It would have to be done on a bipartisan, bicameral basis.

Q: Are you confident, given the polarization in Congress today, that legislators can come together to pass changes to these trust funds?

Romney: The last time there was an effort of this nature, it was the Simpson-Bowles Commission. And they tried to tackle everything all at once, all the trust funds, all of federal spending, all in one big proposal.

And it came one vote away from becoming potentially a law. So it got pretty close. But the fact that it was all-encompassing made it more difficult to get it across the finish line.

And that's why I've proposed that we take these trust funds individually and look at them one by one. Are we likely to get all of them solved in this process? I guess not. I think it's more likely that one or two will be able to get on solid financial footing.

And once we've done that, I think we can go back to the ones we haven't resolved and see if we can't get them over the finish line as well. It's going to be a process. It's going to take some time.

But we want to make sure that the promises that are being made to 20- and 30- and 40-year-olds today are promises that there'll be enough money coming in to actually honor in the future. Nothing is going to happen to change the program for people who are current retirees or those that are nearing retirement. But for those younger people, we want to make sure that we're promising only what we can actually deliver.